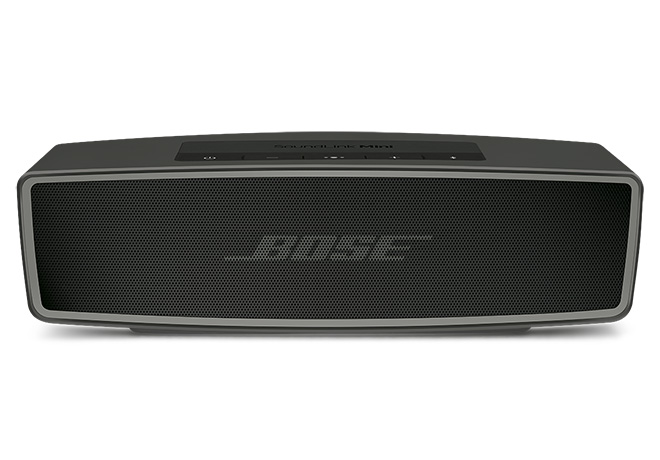 Not quite surprising 2 years after the announcement of the original Soundlink Mini, Bose just revealed the new Bose Soundlink Mini II, sucessor of the maybe most popular portable speaker worldwide that I reviewed here (although in German). According to some rumors the Soundlink Mini managed to sell about 10 million times, quite impressive for a little battery driven speaker.
Interestingly it seems as the Soundlink Mini II just appeared in some European Bose-stores so far and can be ordered from there immediately, but it is not listed in the US-store yet and they don't seem to know even any release-date. In the meantime it has appeared on the US-site for preorder as well.

The new model looks just like the old one, but it is available in black or white now. It gained some new features like speakerphone that was missing on the original model, voice prompts (probably the same as on the Soundlink Colour), it can finally be charged through MicroUSB and battery life seems to have been slightly improved, but no other obvious changes so far. I am not sure if the new one will really sound much different, there is not a single word about changes in sound etc.

To tell the truth I was expecting something completely new, more rugged maybe, water proof or whatever, but it seems as if Bose just tries to sell the same speaker again only with some new added features that were simply lacking from the original.
As soon as I can get my hands on a unit, I will check out if the sonic qualities have indeed improved over the old Soundlink Mini, if not the Soundlink Mini II will have to fight against some strong competition with the JBL Charge 2+, Denon Envaya Mini or the upcoming RIVA S.
Posted by oluv at 9:35 PM

Email ThisBlogThis!Share to TwitterShare to FacebookShare to Pinterest
Labels: Bluetooth, Bose, NEWS, portable, SPEAKERS
Newer Post Older Post Home
No fake or paid reviews as most speakers are bought with my own money!
If you like my blog please support my work with a small donation so I can continue doing independent tests and videos.