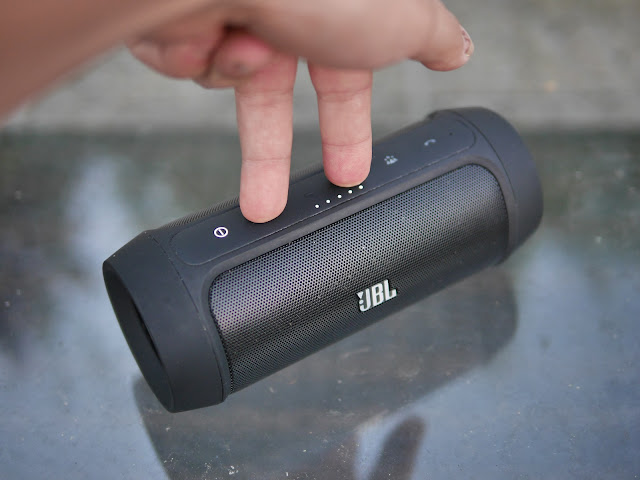 Finally with the latest firmware the JBL Charge 2 manages to be what it should have been from the very beginning back in September, when it still suffered from teething troubles.
Until now I couldn't fully recommend the JBL Charge 2 without reservations, as the issues were too disturbing and it remained rather a "also-ran" speaker among all the others.
In the meantime there was lots of discussion on Youtube regarding all those problems with many users complaining about their units still to distort, while others claimed to have no problems at all. There were theories established about serial-numbers which would indicate when the unit was manufactured and when it would be without issues. I was enjoying all this similar to reading a crime thriller.
Then finally someone from Japan came up with an undocumented trick to check the currently installed firmware on his JBL Charge 2. He finally claimed that only the latest firmware "1.4.1" would fix all problems, while all firmwares below suffered from this or that DSP-issue.

To check your firmware you have to power on your JBL Charge 2 and be sure that it won't connect to any nearby Bluetooth-device. Now press the Bluetooth button and volume + button simultaneously and keep them pressed for some seconds to finally hear a nice female voice that will tell you the firmware number, something like that: "one four one".

If you don't hear "one four one", you should get your device updated. I own a "refurbished" version that I bought back in December after returning my very first unit from September, and while my current unit didn't have all these distortion problems of the very first unit, it was still close to unsable at lower levels during the first 4-5 volume steps. After checking my firmware it said: 1.4.0, therefore I decided to update my model as soon as possible.
Unfortunately Harman never planned to make the devices user-upgradeable, thus you should contact an authorised service center. I contacted Harman directly to ask them how to proceed and 2 days later I got their response where they told me the responsible center in my area. I already knew DEC Service Center in Vienna, as they are also responsible for Panasonic repairs and I had some repeated issues with my Lumix cameras or lenses. The next day I took my JBL Charge 2 and left it there for an update. After 10 minutes I already got it back with 1.4.1-firmware installed and had a chat with the responsible technician who was well aware of the problems.
According to him this whole thing was getting quite fuzzy, as there were many users who complained about the problems, but at the very beginning even the technician wouldn't acknowledge them. There was no statement from Harman either until January where they finally issued an official update-service. A special updater-software for 1.4.1 version was provided to all service centers with a time-limit of 1 week to be downloaded, otherwise a permission for a new download had to be requested again. Login has still to be done through some Harman server etc, so this whole thing still sounds a bit "obscured" for me and I don't understand that Harman didn 't even care to contact their customers to inform them about the update. I had contacted Harman several times about this, at the very beginning they suggested to return the speaker, when I asked afterwards if there would be any update, they could have at least responded now. Given the fact that the update was already out nearly half a year, while some new owners checking their firmware are still hearing "one three eight", this is really annyoing! They could have at least communicated it in one way or the other.
Update: Check out how you can upgrade the firmware on your own here!

But the most important fact is, that the JBL Charge 2 is completely issue-free now. I measured the JBL Charge 2 with my previous 1.4.0 firmware and measured it again after the update to 1.4.1, and what you can see from the measurements is that the first 3 steps were entirely screwed up with the old firmware (green) that was incapable of producing and clean output below 150Hz while with the new firmware (blue) it measures ok. Unfortunately the very rough volume-steps that were already present with the previous versions became even stronger now. The first volume step is louder now than it was before and the 3rd volume step is nearly as loud as the 4th step from the old version. So if you intend using your JBL Charge 2 at low levels, it might be a hassle to achieve the correct loudness as the first step might be too soft, while the second one too loud already especially when using an iOS device where volume control is mirrored between speaker and player: 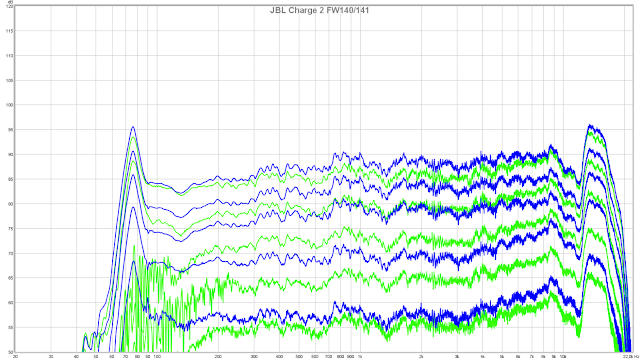 The new firmware also seems to come with some minimal sound-adjustments. I matched the 5th volume step for both by pulling the old version some dB up, and as you can see the new firmware took away a little bass in the region up to 300Hz (the strong peak at around 75Hz remained exactly the same though) but usually you shouldn't notice any difference at all without having a direct comparison. The other slight deviations visible are probably measuring errors due to slightly different placement (again green firmware 1.4.0 and blue 1.4.1): 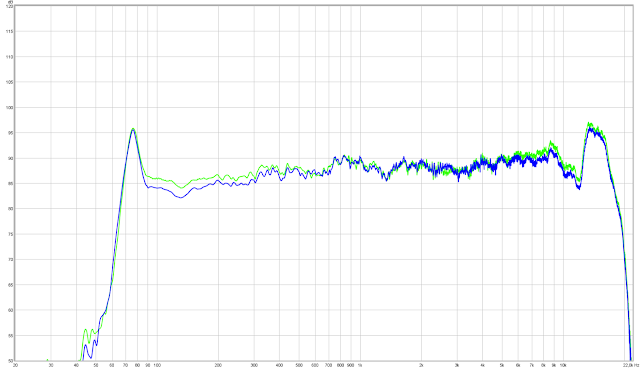 After the update I would say that the JBL Charge 2 is in the top-line of current portable speakers, with a great punchy sound at all volume levels, class-leasing battery life and a lower price tag than most competition, especially now after the new Charge 2+ has been issued. Thanks to the Charge 2+, the Charge 2 can be even found far below 100$/€ which is quite a bargain. Grab one, if you were still undecided.
Many will ask if it is any better than the Denon Envaya Mini? I would say yes, if the total package is considered, as the Charge 2 makes more fun, has a much more solid battery which can also charge other devices and meanwhile it also cheaper, while the Denon became more expensive. The Denon might have a flatter and more true sound, but the JBL fares really well with its obvious bass and treble-peak that both make it more consumer oriented.

If you want to know if the Charge 2+ sounds any better than the Charge 2, stay tuned as I will compare them both directly soon.
Posted by oluv at 8:56 PM

Email ThisBlogThis!Share to TwitterShare to FacebookShare to Pinterest
Labels: Bluetooth, JBL, MISC., NEWS, portable, SPEAKERS
Newer Post Older Post Home
No fake or paid reviews as most speakers are bought with my own money!
If you like my blog please support my work with a small donation so I can continue doing independent tests and videos.