First Impressions: Marshall Kilburn & JBL Xtreme... and the winner is? 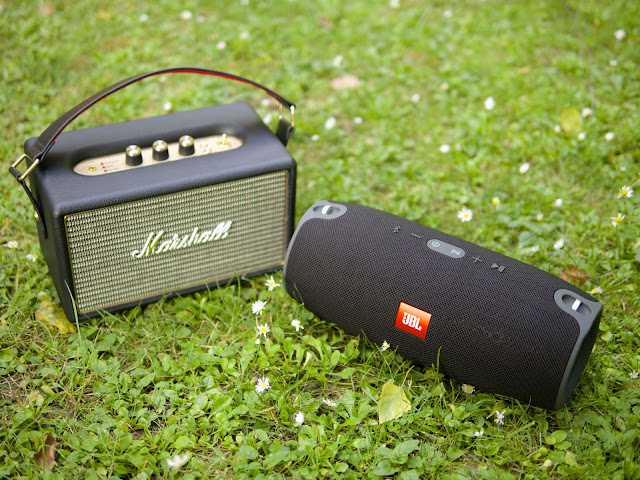 It was a stressful evening. I got the Marshall Kilburn from my friend and wanted to concentrate on this next, prepare some preview video or even a full review. But arriving at home the JBL Xtreme was standing in front of my door.
I already had a short listen to the Kilburn together with my friend where we did some switching between the RIVA Turbo X and the Kilburn, and although quite a bit fuller sounding than the RIVA, the Kilburn didn't really manage to knock my socks off, but when I turned on the JBL I immediately knew this is going to be more fun. Suddenly the Kilburn started sounding a bit honky and tinny. Both are not neutral speakers like the RIVA for example, but the JBL is simply tuned for more fun. It is a bass-monster, very powerful, louder than the Kilburn, louder than the RIVA Turbo X and probably as loud as the Beats Pill XL (RIP), but with the difference, that the JBL still sounds punchy and powerful with lots of bass at maximum volume and the bass sounds like bass, not as if someone was knocking on wood. I couldn't notice any stronger distortion at maximum volume, and although there was some slight dynamic processing, it was not as extreme as on the JBL Charge 2 or on the Infinity One. The JBL Xtreme is a real party machine. Take it to the beach and crank it to the maximum, it will still sound impressive. They claim 40W but from AC-power, I tested if it became any softer from battery and although there is a slight difference in loudness when run from AC-power, I had to check several times to really hear the difference, it is by far not as pronounced as on the Harman Kardon Onyx for example. The JBL Xtreme gets just slightly louder maybe 1-2dB when plugged in, but it doesn't reduce bass or deteriorate sound by any means.
Everyone who is already in panic looking for some substitute for his Pill XL, because he sent it to Apple already, don't look any further. Even if you are still undecided if you are really going to send it in, just take the 300$ from apple and order the JBL Xtreme immediately!
Now the Megaboom really became an expensive toy.

Meanwhile I managed to prepare a short introduction of the Kilburn and soundcheck between Kilburn and the Xtreme, as well as a full review for the Xtreme here.

Please have a listen and let me know what you think:


And the winner is? I think I must have a bit more listen to the Kilburn...

Email ThisBlogThis!Share to TwitterShare to FacebookShare to Pinterest
Labels: Bluetooth, FIRST IMPRESSIONS, JBL, Marshall, outdoor, portable, SPEAKERS
Newer Post Older Post Home
No fake or paid reviews as most speakers are bought with my own money!
If you like my blog please support my work with a small donation so I can continue doing independent tests and videos.