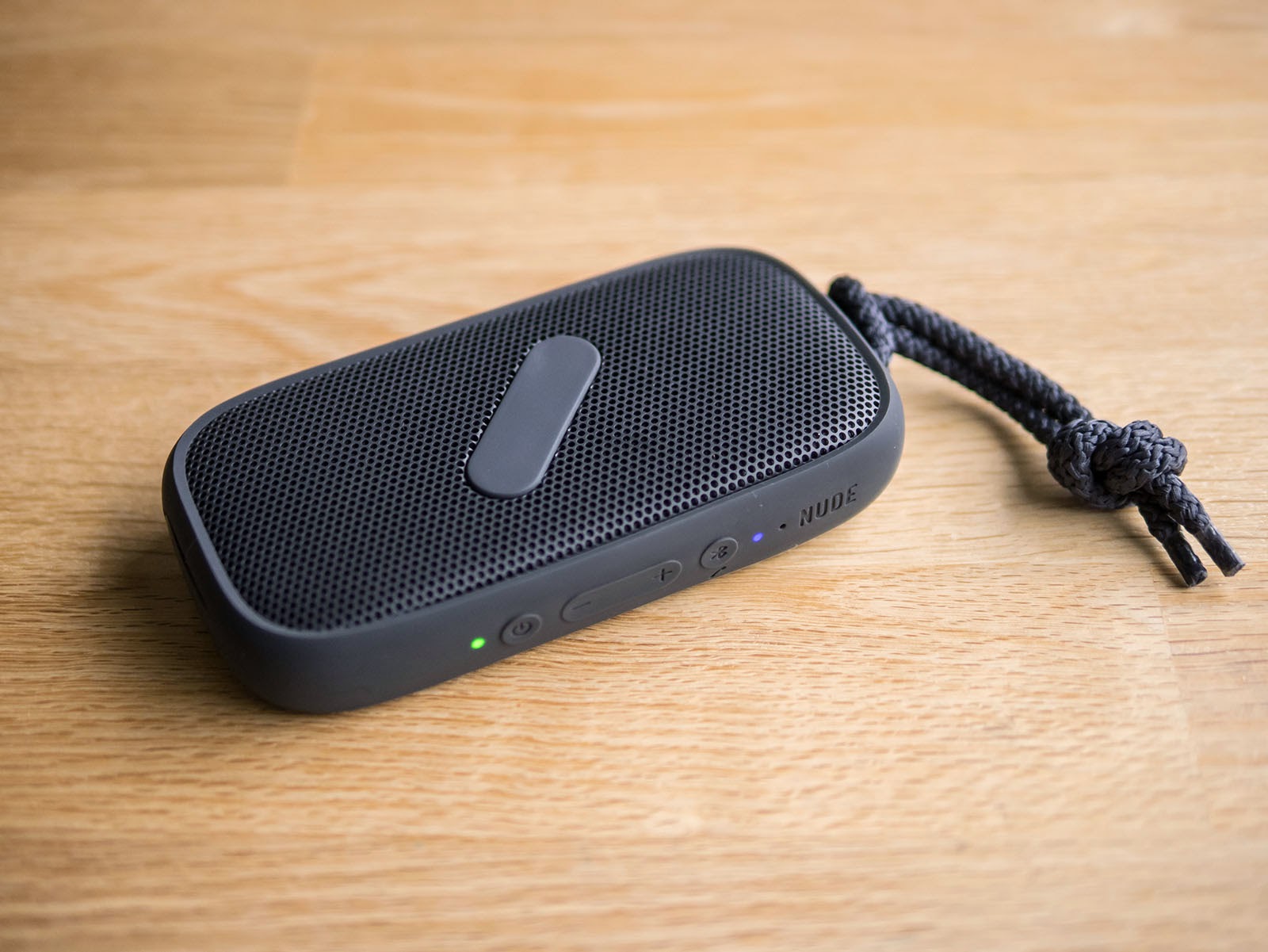 I am still looking for a nicely compact speaker to be carried all-around, small enough to fit inside a pocket which despite its small size should be able to pump out some serious sound. So far I haven't found anything worth mentioning. The Mini Jambox, TDK A12 or JBL Clip being probably the best solutions are still far from anything serious sounding.
Now NudeAudio came up with a kickstarter campaign for their Move Super M speaker which finally managed to find its way into commercial stores. After all the hype I thought I should give it a try if it really deserves all the rumor, so jump in to find out if it is worth the hassle. 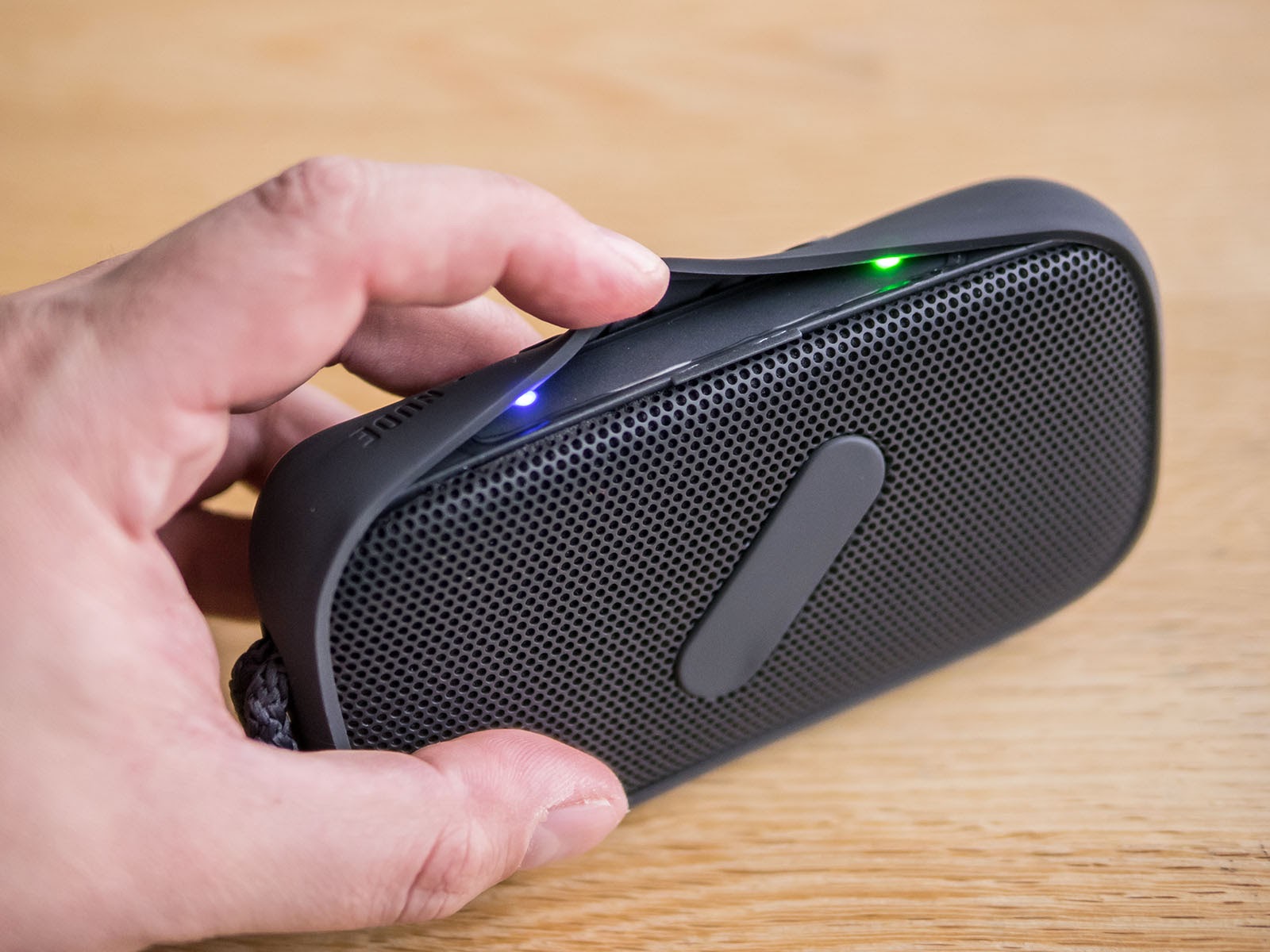 At least the specs on paper sound quite promising: a flat and light pocketable speaker with omnidirectional sound thanks to its 4 active drives and 2 opposing passive radiators moreover dustproof and splash resistant could indeed become the perfect portable companion. Although not a bargain for 99$ or 89€ it could still be regarded as quite affordable if it delivered. Let me spoil the whole suspense with telling you that it doesn't. 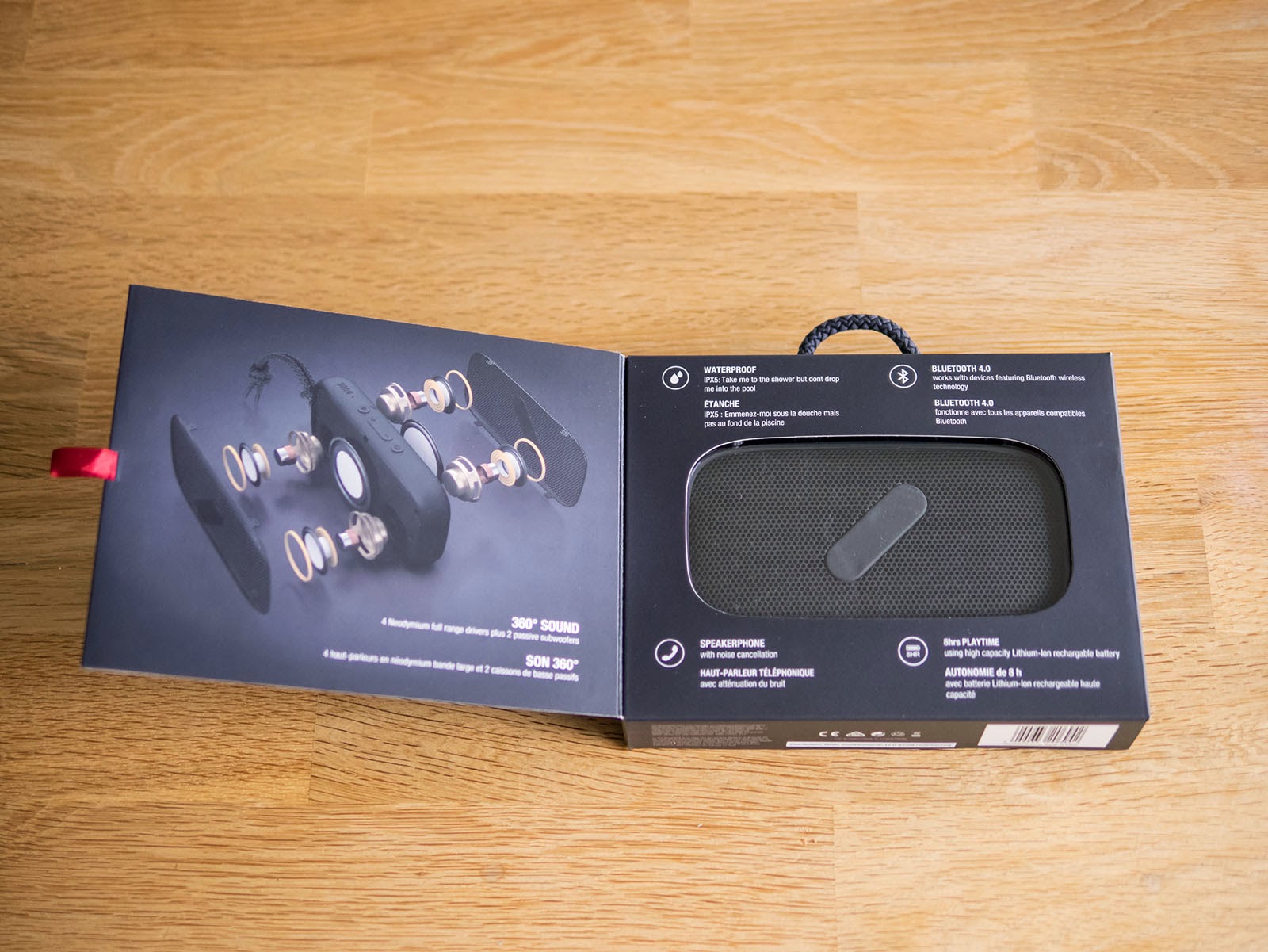 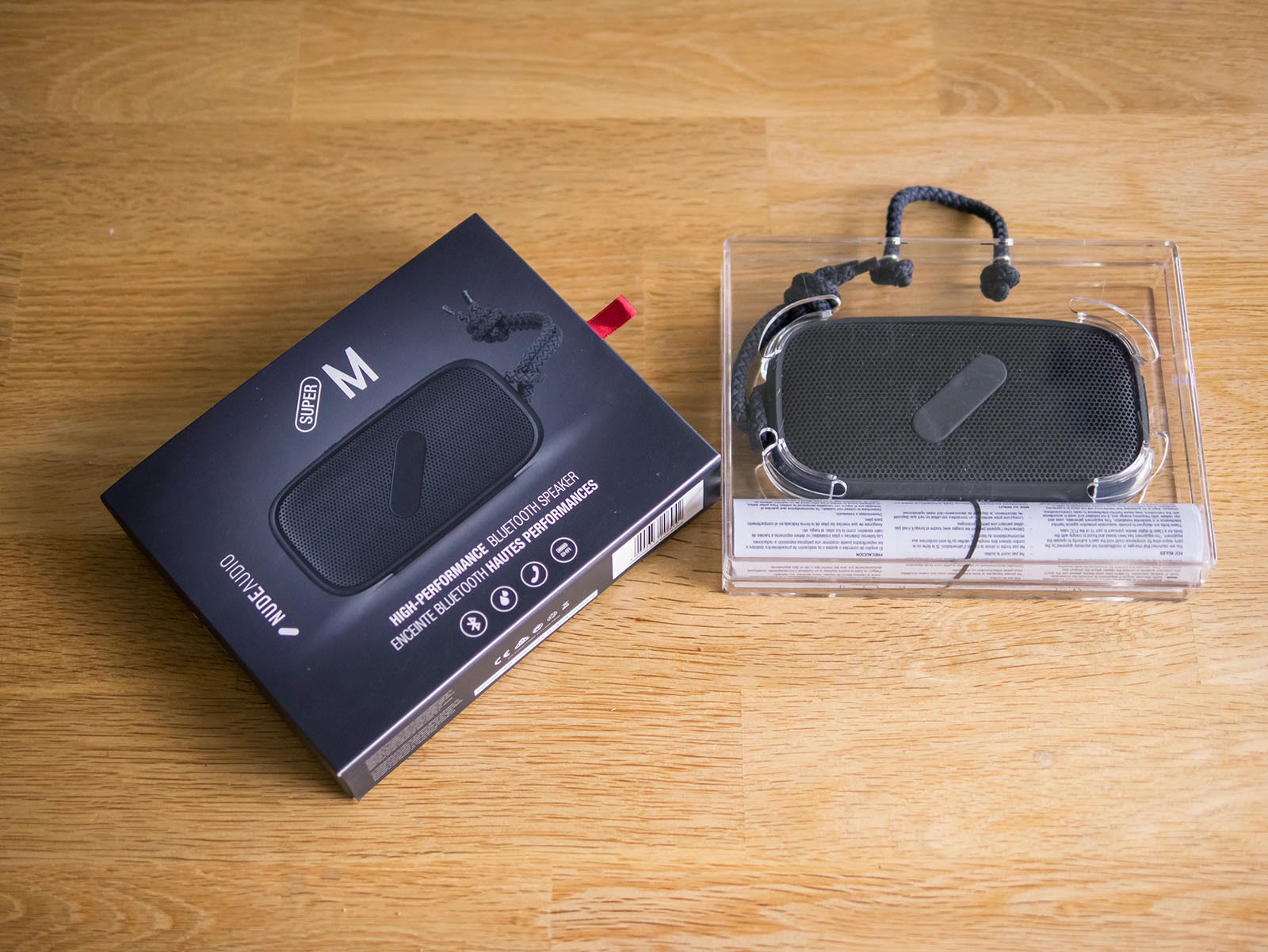 The Super M already attracted negative attention when I took it out of the brand new shiny plastic box. The box was double sealed with one seal already broken, so it might have been already in use who knows, but it was immediately noticeable that the rubber ring surrounding the speaker was about to peel off. I already read about that problem in some other early reviews, but I didn't think this would still be the case with the production models. 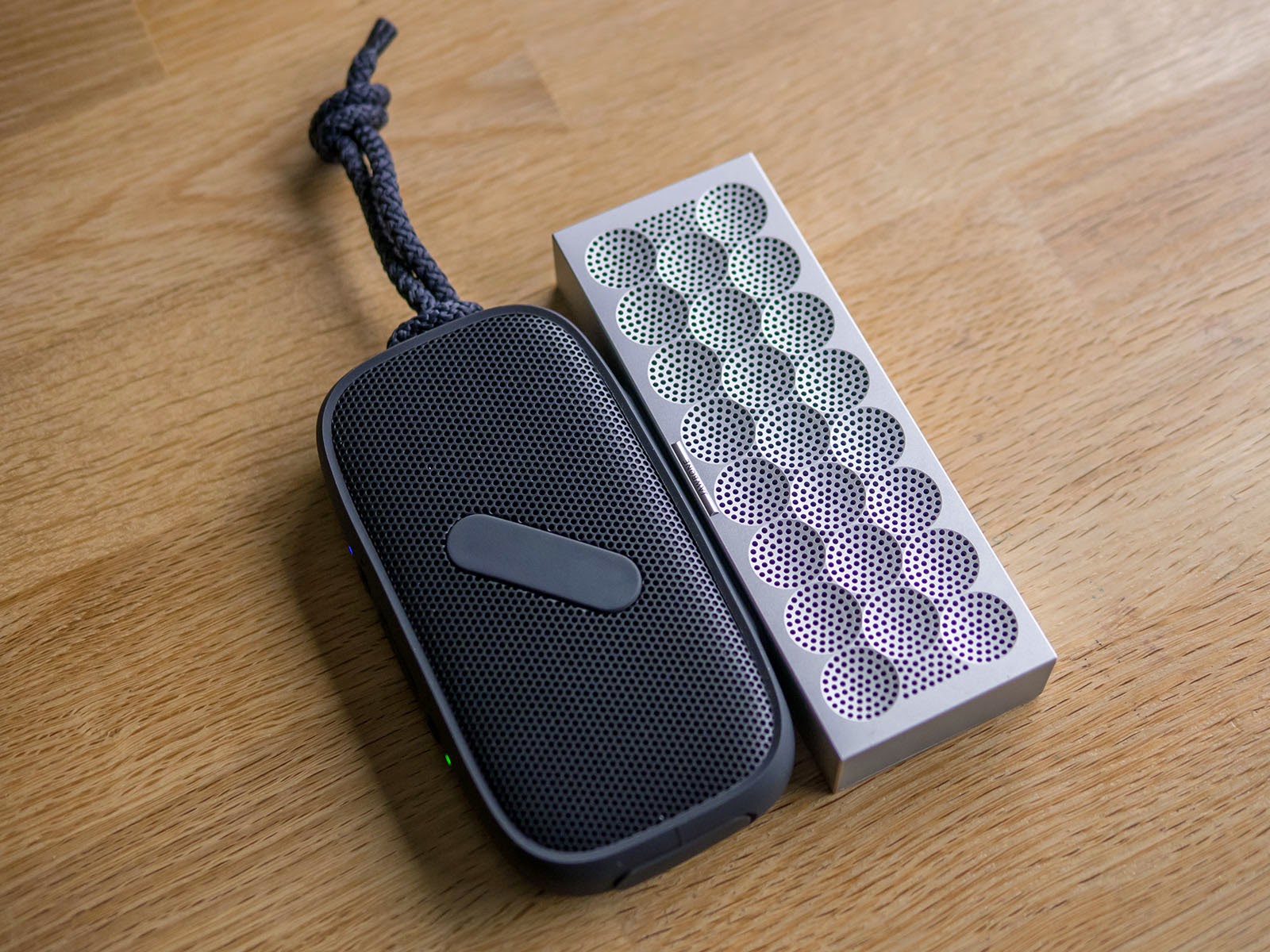 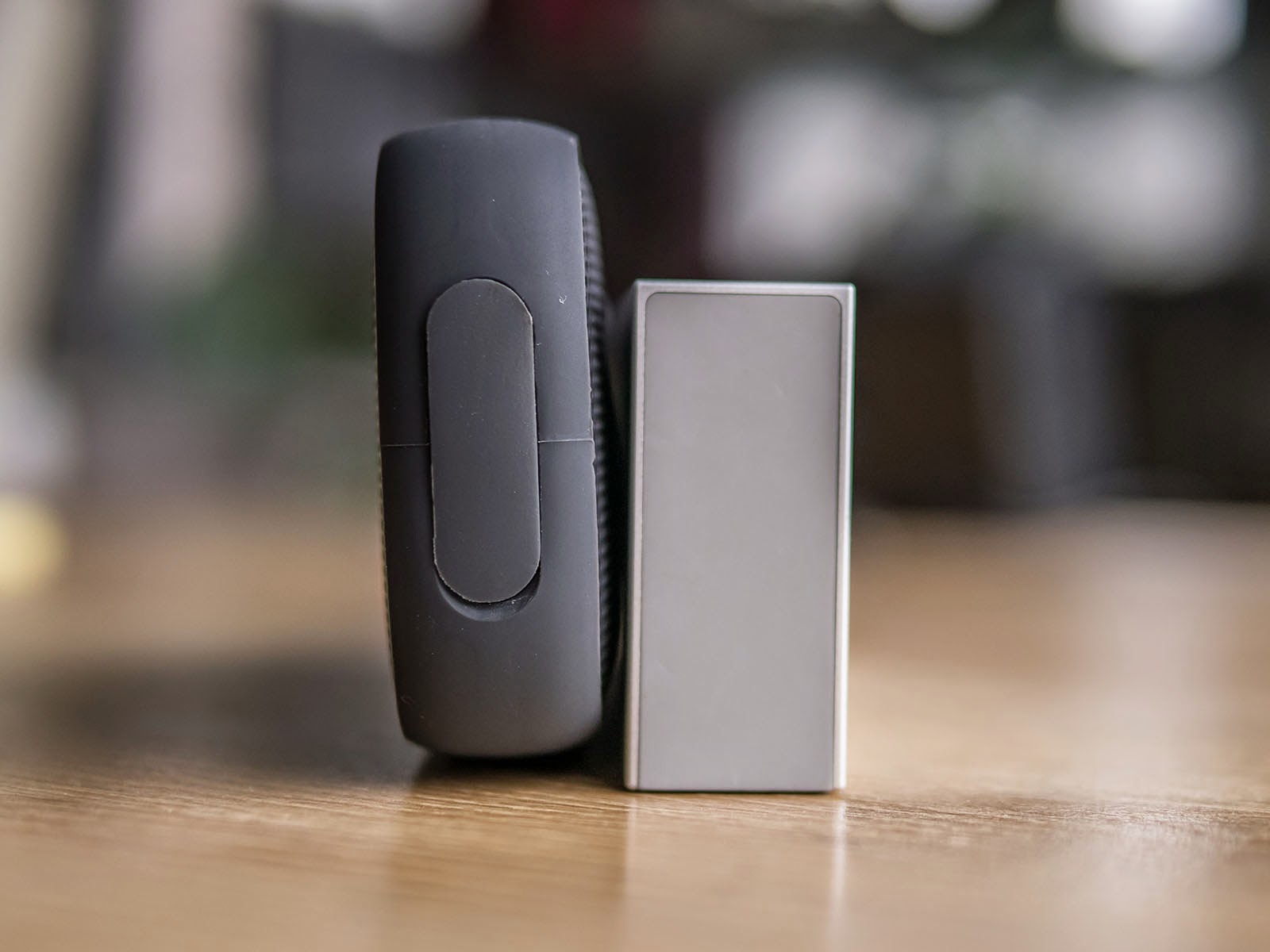 I really like the size and form factor of the Super M. In overall size it might be similar to the Mini Jambox but thanks to all the sharp edges the Mini Jambox is not as easily to put inside a pocket as the Super M. The Super M is broader but still a bit flatter at the same time with all edges being smooth. Inside a pocket it rather feels like a big phone or phablet when carried around like that. 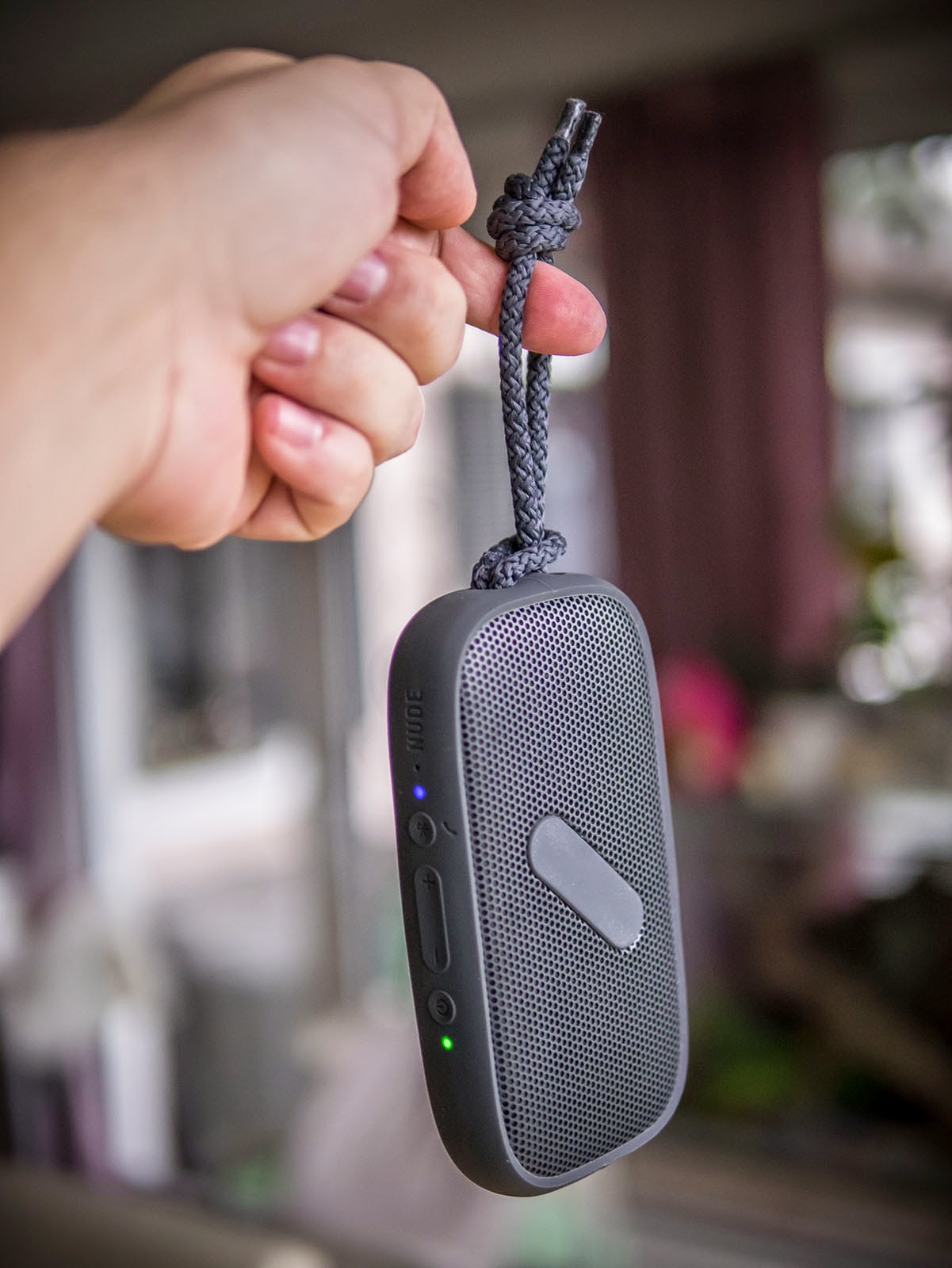 You can of course also let it hang somewhere thanks to the included strap, but the Super M is really one of the few examples that will allow you to take it with you without even thinking about it twice. The only speakers still smaller than the Super M are all those mono speakers like the JBL Clip or the TDK A12 for example. 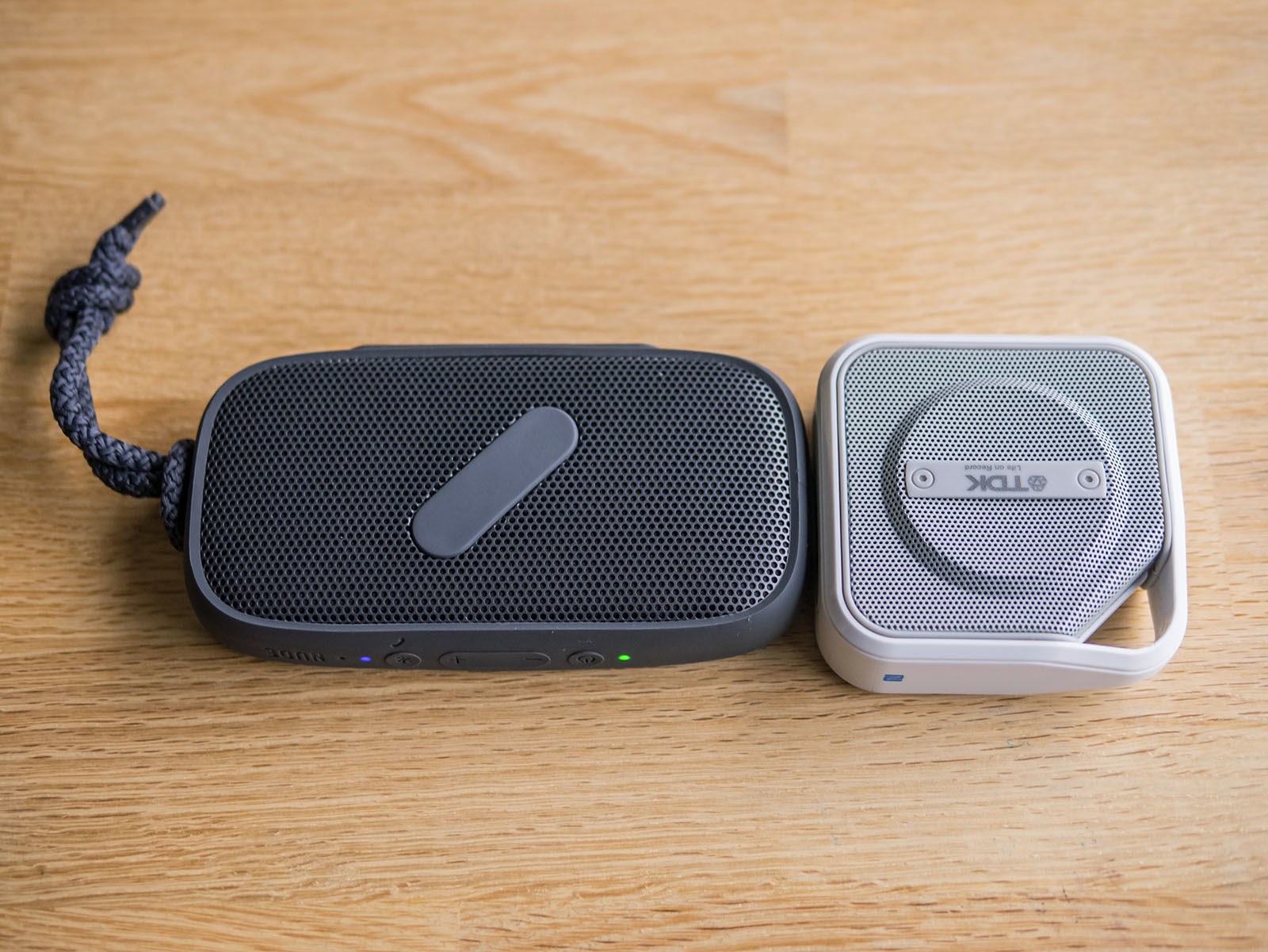 Turn the Super M on and it will play some tri-tone signalising that it is on. On the first power on it will immediately jump into pairing mode and should appear as "Nude Super-M". A successful pairing will play another loud beep. Volume control is not mirrored between the speaker and your streaming device, so you will have to deal with 2 separate volume controls but as there doesn't seem to be any dynamic sound adjustments going on, you could leave the Super M just at its highest step and control volume only through your device although the lowest possible volume step might be too loud in such a case. The Super M has only 8 dedicated volume steps and you will get 2 different beeps if either the lowest or highest volume step has been reached. There are no track-controls available on the speaker, which is a pity, but you can start or stop playback with the Bluetooth-button. 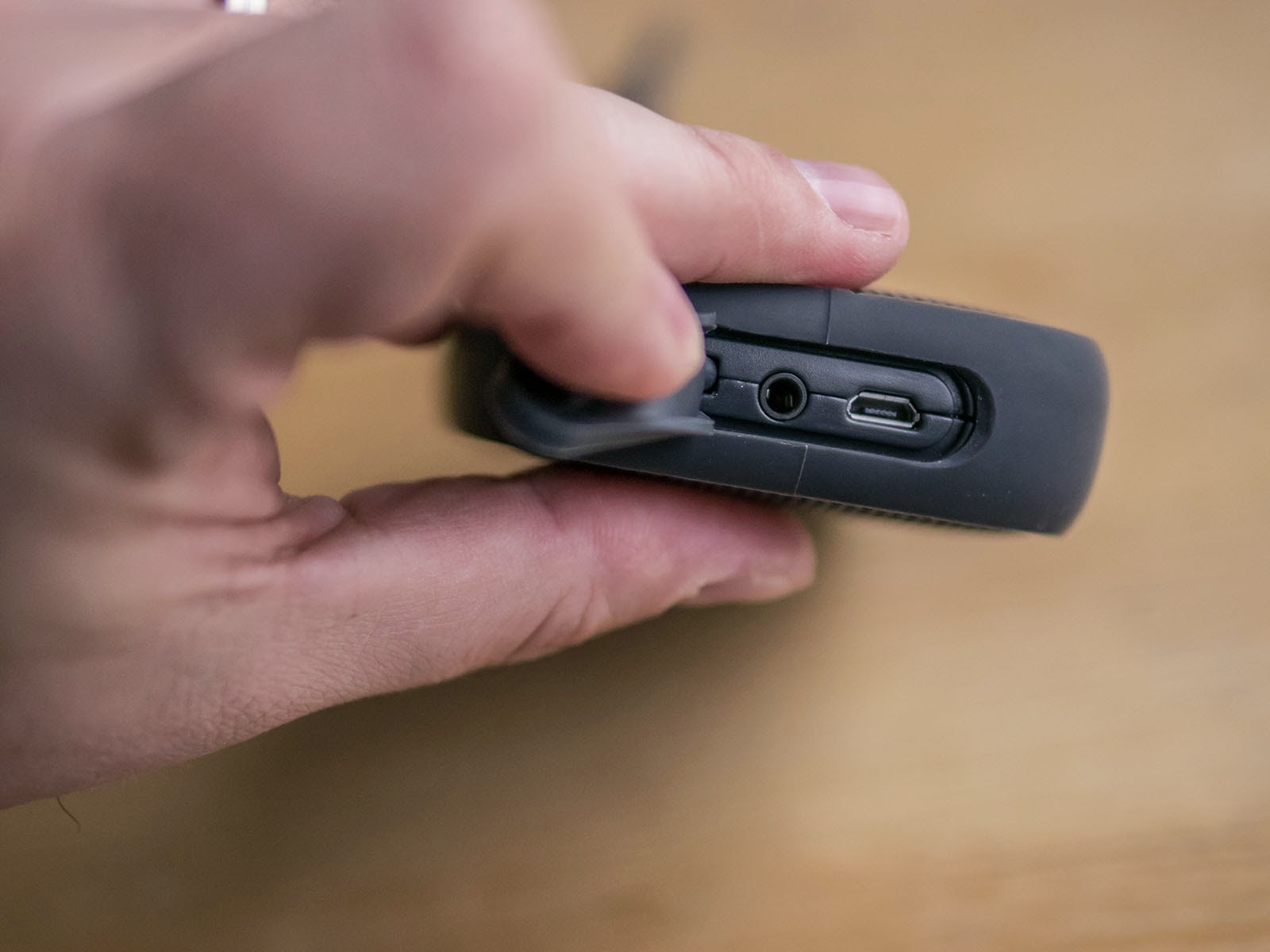 The Super M can be charged through Micro USB, with the ports hidden behind a rubber flap. Maybe to save costs it doesn't come with an own charger, you have to use one of your existing ones. I would have preferred a charger instead of the plastic box, which doesn't look that cheap at all. They could have easily saved on that one by using some simple carton packaging. 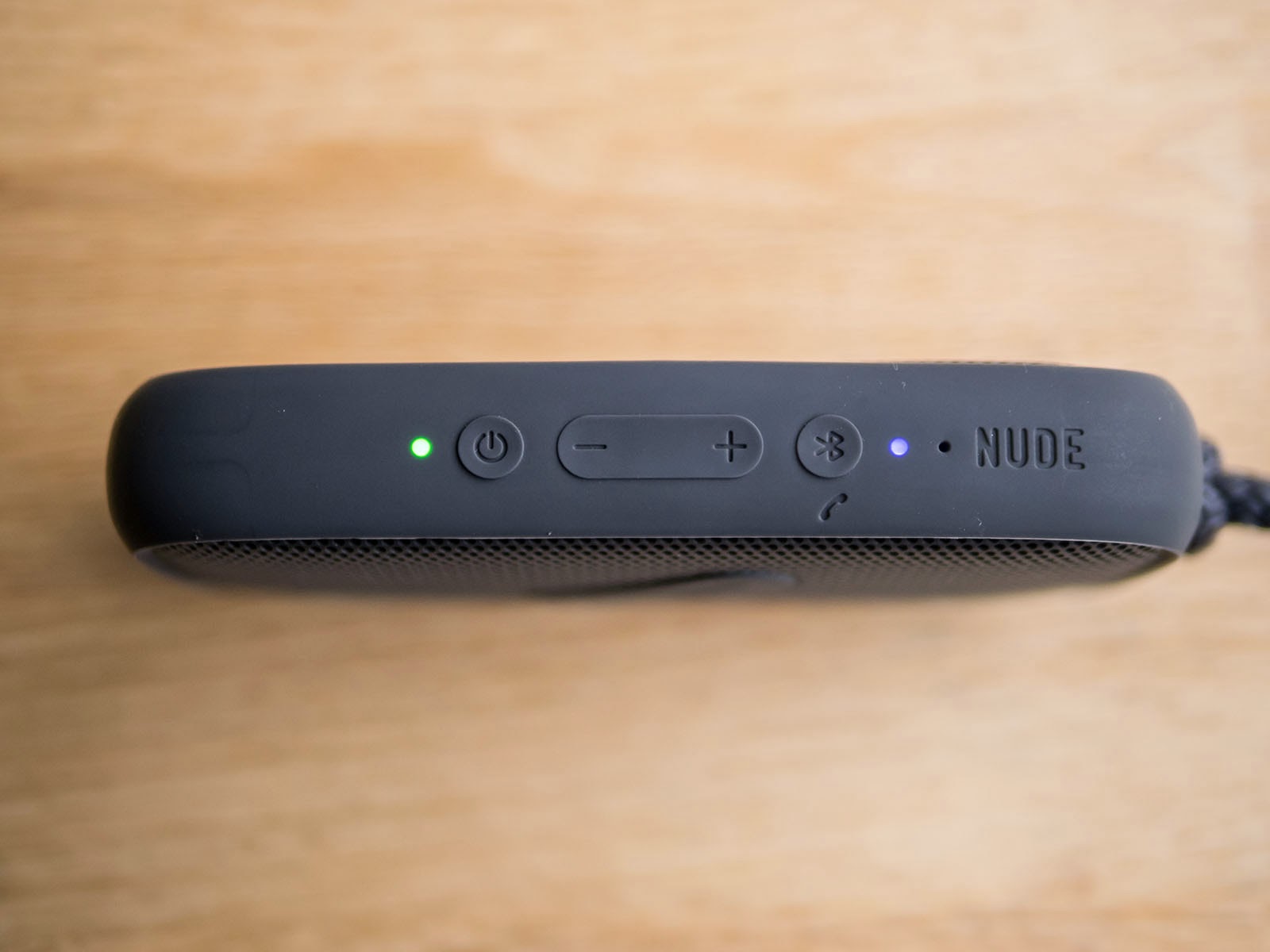 There is no real battery charging indicator just a single green light which can turn to red if the battery becomes weak.
In some reviews I had read about bad Bluetooth reach with some per-series units, fortunately my unit doesn't seem to have those problems with reception being pretty good even working from another room. But after the rubber ring started to get off nearly completely, I lost any confidence in the build quality of this speaker. I might have went through the hassle of asking for a replacement if at least sound quality was good enough, but the sound coming out of the Super M was average at best, not what I had expected. I have heard dozens different speakers, some cheaper ones, some larger ones, but the Super M hardly managed to surpass any of those in overall sound quality. 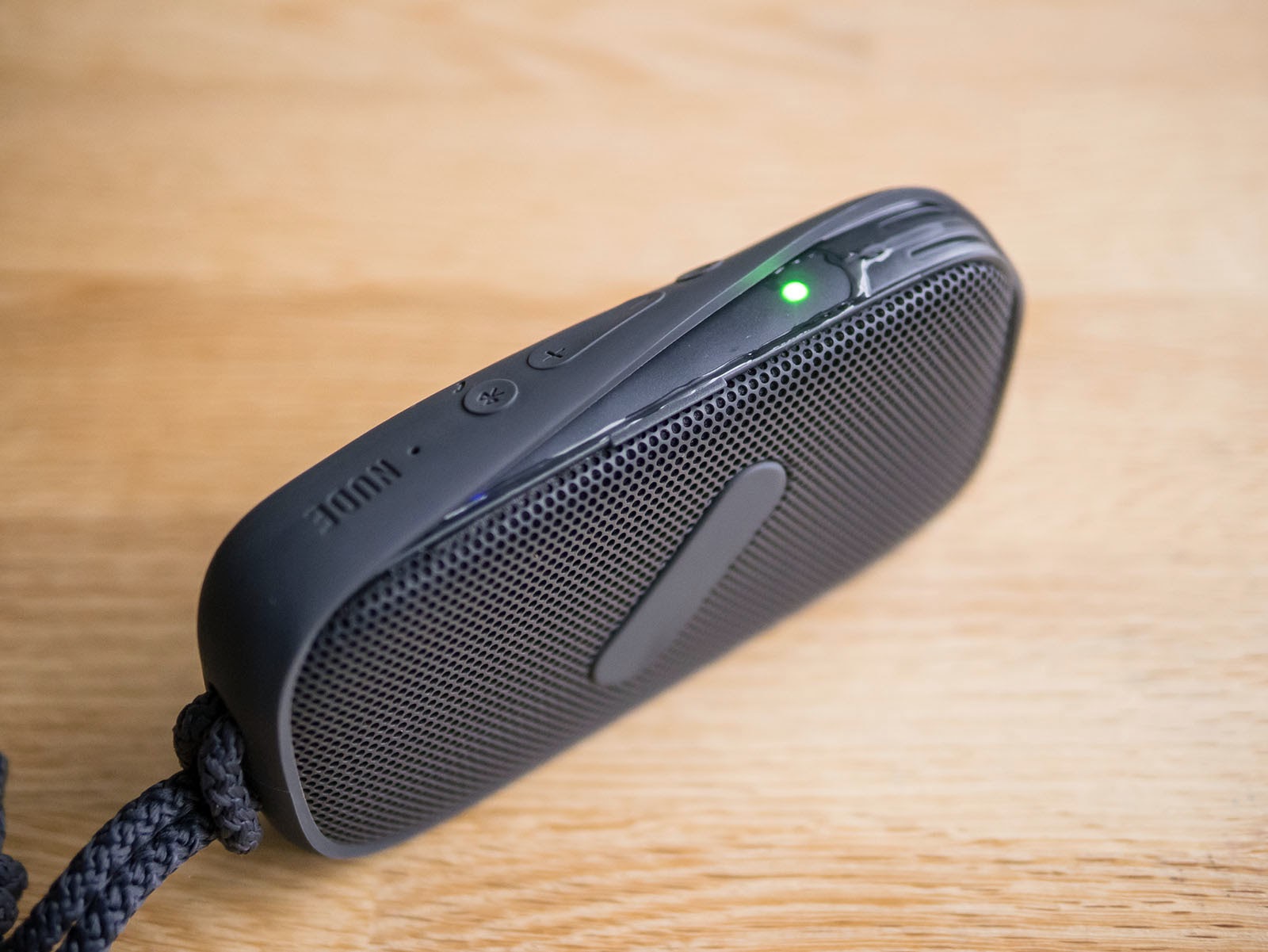 The Super M is not a bad sounding speaker, but it cannot impress in any way except maybe overall loudness. The Super M can play pretty loud, slightly louder than the Fugoo with its "loud mode", but while the Fugoo will already distort, the Super M will still sound rather clean without any obvious sound processing. Unfortunately it doesn't adjust its sound to the actual loudness level so it will sound equal at highest and at its lowest level. The overall sound is rather focused on upper bass and lower treble and remains rather tinny with hardly any lower bass. Although the sound is not really muffled, mids still seem quite a bit covered. I already find the Mini Jambox quite a bit dull, but the Super M sounds even duller. At low levels the Mini Jambox wins hands down due to some dynamic bass adjustment that the Super M simply does not apply. At low levels the Mini Jambox will sound more serious with better bass response and a clearer overall sound although the differences are not huge. Both Super M and Mini Jambox are still far away of bigger speakers like the JBL Charge 2 or Bose Soundlink Mini. I would regard the Fugoo as the "minimum" a speaker has to deliver on sound-quality and bass-amount I am willing to accept for the sound to be satisfying. My hope was the Super M would at least come close to the Fugoo, but it does not unfortunately. It is rather closer to all the other sub-100$ speakers on the market right now, but doesn't stick out in any way. The Super M has drivers to the front and back thus making it close to 360° but I am not sure if this is not just a pointless exercise as the sound could be also equally omnidirectional with drivers just on one side with the speaker placed flat on a surface. But the Super M has some directional treble dispersion which will make it even more muffled if not listened exactly on axis. Curiously the back-side sounds duller than the front-side which is also visible from the measurements. This is not what a 360° speaker is all about, neither did I notice any stereo separation worth mentioning, regardless how I placed the speaker or how I listened. Maybe it would have helped if both stereo-channels were split to the front and back exclusively, similar to the way B&O dit it on their Beoplay A2. The Super M has some potential which obviously was potentially wasted. Some additional DSP processing with dynamic bass management and better conception of stereo, could indeed make the Super M sound impressive. I am sure that only good DSP tuning is the key to success for speakers that small. At such small sizes you cannot design drivers that manage to cover the whole frequency spectrum adequately, you have to help along with some additional processing, artificial bass boost at lower levels and other tricks to make them actually listenable. In the end all of those tiny speakers sound pretty similar, as hardly any of them include real dynamic bass management which is a pity. I would prefer a good and full bodied sounding speaker at normal listening levels than a screaming one that can be just loud. Of course it would be great to have both, great sound at normal levels and high maximum loudness.

I prepared a direct comparison of the Super M with the Mini Jambox. The Mini Jambox was playing some notches below maximum, while the Super M was rather close to its medium volume setting, which would result in some nice room-filling loudness level. At these levels the Mini Jambox still sounds better especially with "Liveaudio" turned on, at even lower levels the differences would be even more obvious, but in reality both speakers are not quite able to deliver any really serious sound.

I also did a comparison with 2 other weatherproof speakers: the TDK A12 being smaller and costing less than half of the Super M and the Fugoo being larger and costing twice as much (although meanwhile the price seems to have dropped because the Sport and Style version of the Fugoo can be had for 139$ currently, making it just 40$ more expensive than the Super M). The TDK A12 is quite close in overall performance although it won't play as loud as the Super M, but for the price of one Super M you could also buy 2 A12 and link them wirelessly for stereo sound:

Here some in-room response of all available volume steps measured with the front side of the speaker from 50cm and smoothed with 1/6 octave, red being the maximum volume, blue the 5th step which is around half volume and green the same 5th step measured from behind. You can see that there is no dynamic sound adjustement, apart from some bass-reduction close to top level, but overall sound remains tinny with no bass at all below 100Hz and stronger bass roll-off already starting above 200Hz. There is some upper bass boost between 200Hz and 500Hz while mids remain a bit recessed. 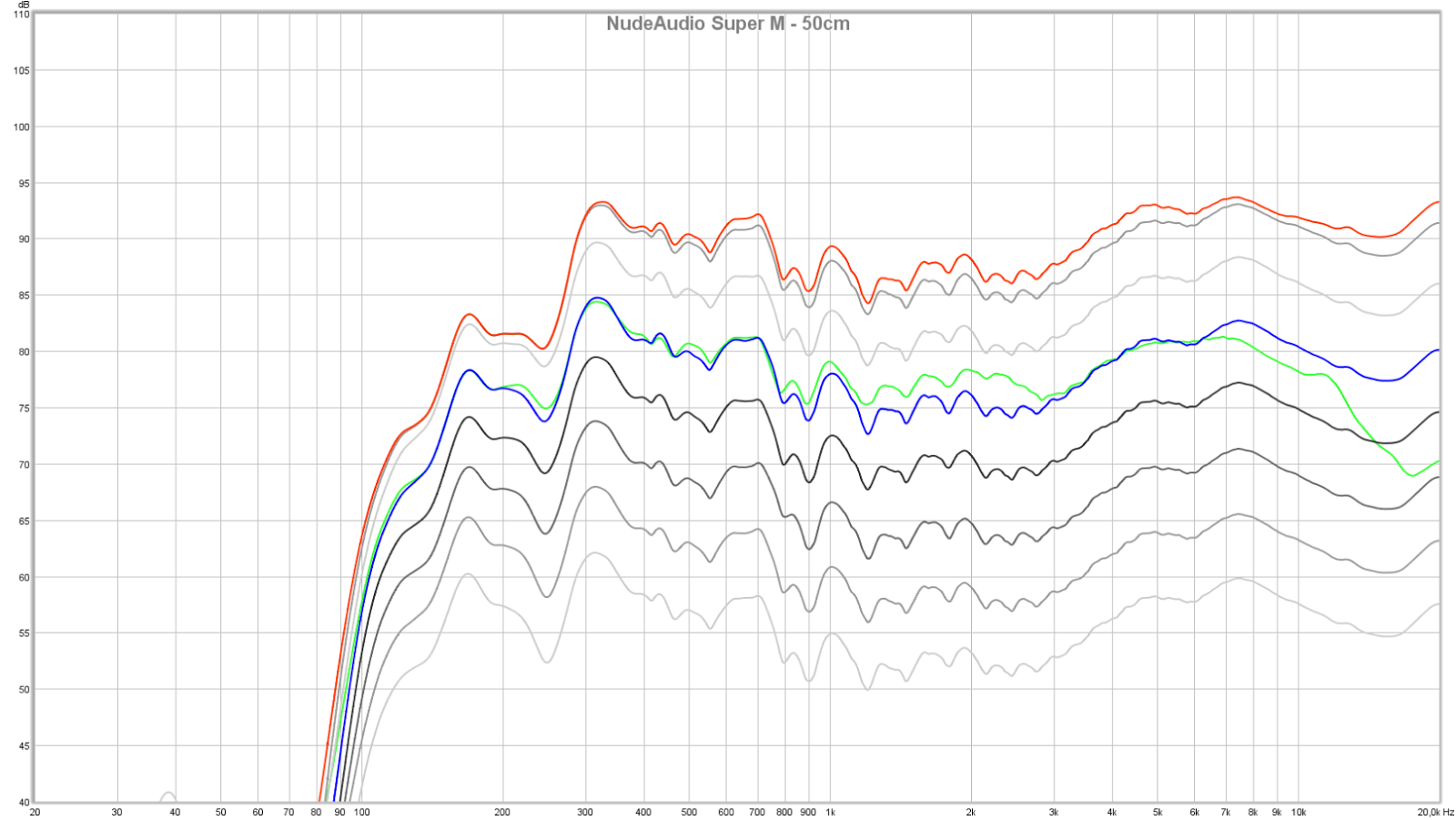 I also did some measurements off-axis, with the speaker tilted 45° backwards and laying completely flat. When listening elevated from 45° there is some slight treble loss, which is still quite acceptable, but treble is lost nearly completely when listened aimed exactly at the speaker-side. 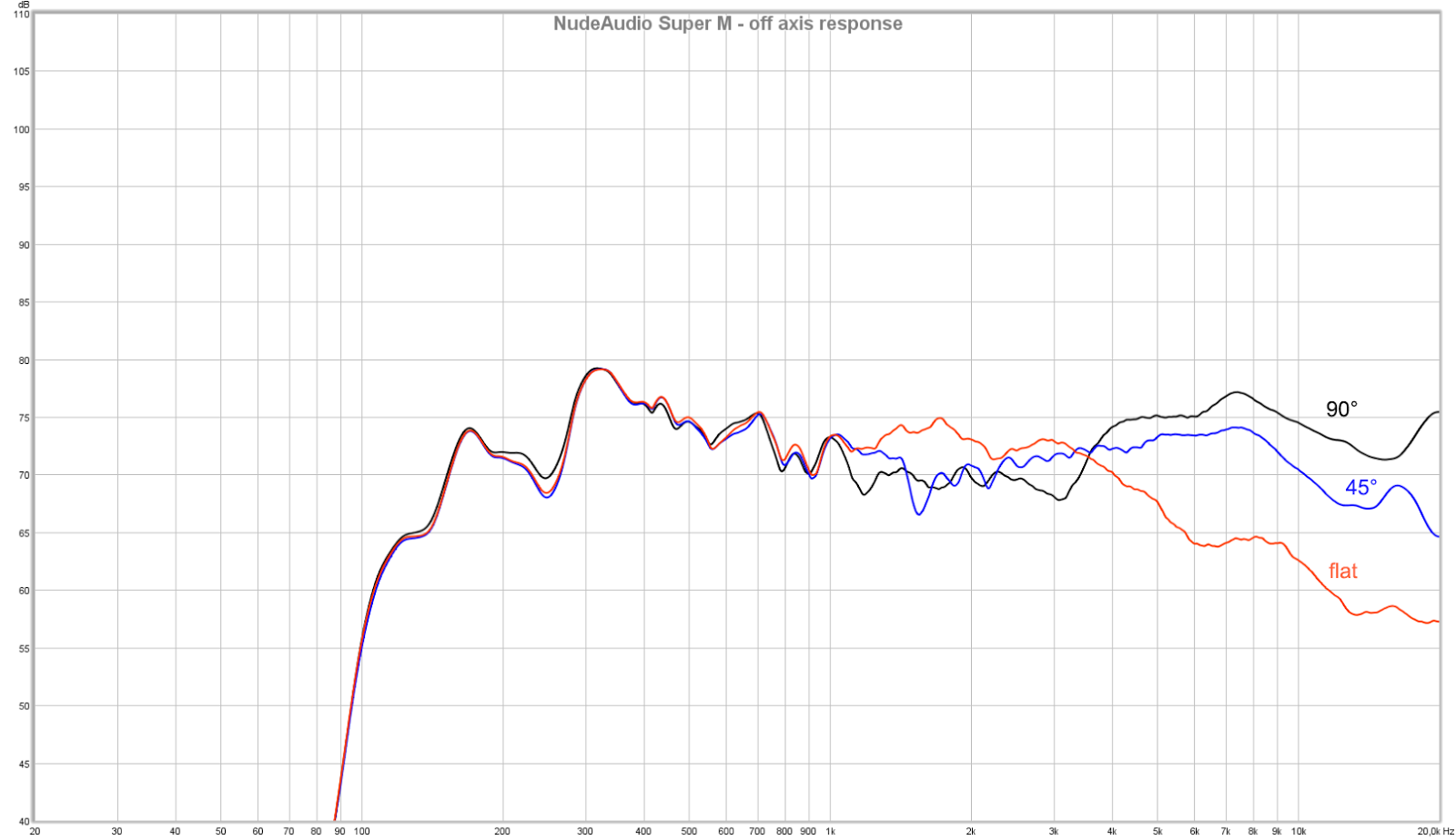 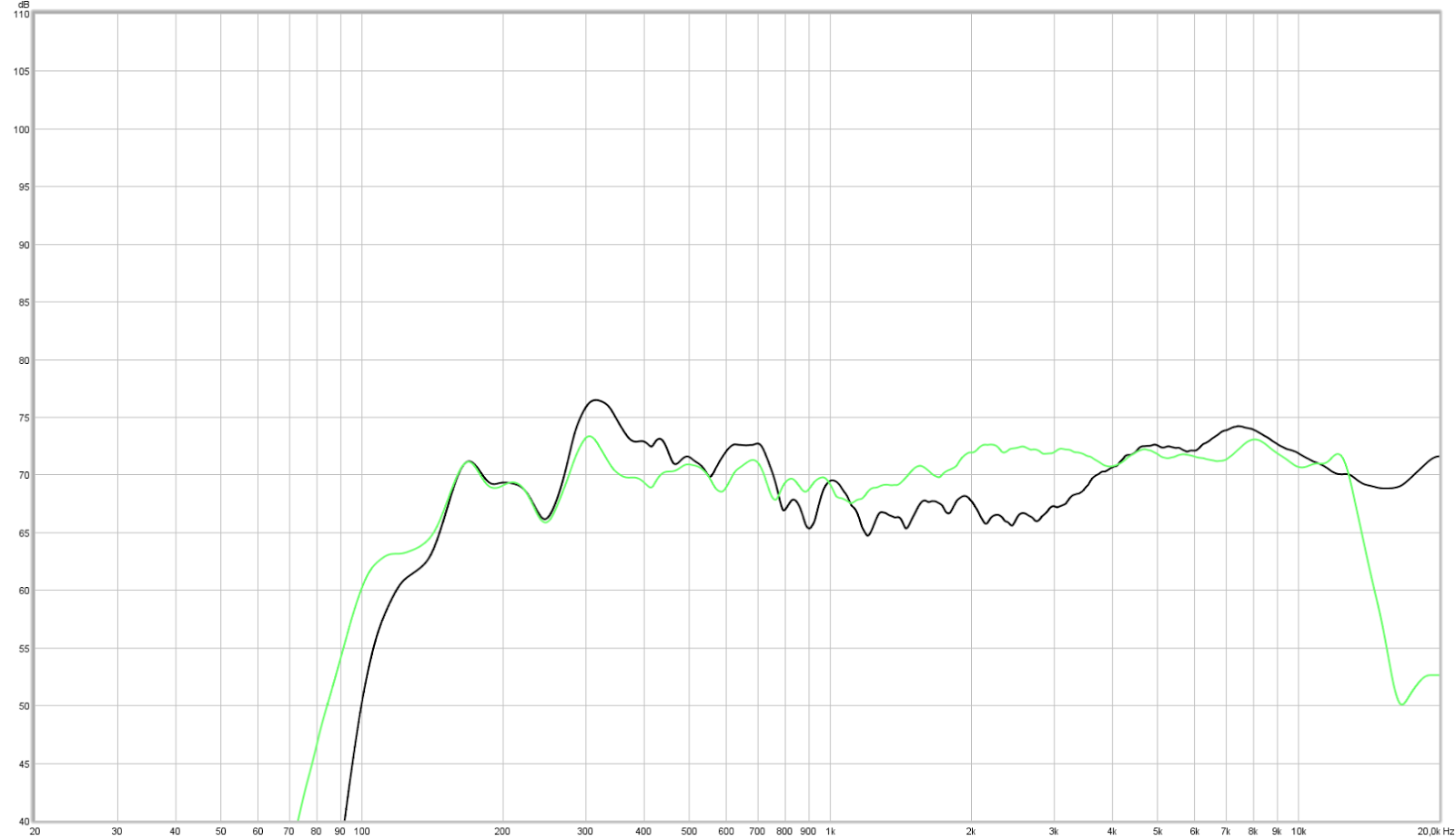 For the sake of completeness I also did a close-up measurement from 10cm to minimize room-influence taken for the front (black) and backside (pink) of the speaker. It is pretty obvious that both sides are tuned differently, which is probably due to sample variation of the used drivers, this is definitely not a measuring error, as I could also hear a slight difference in sound between both sides: 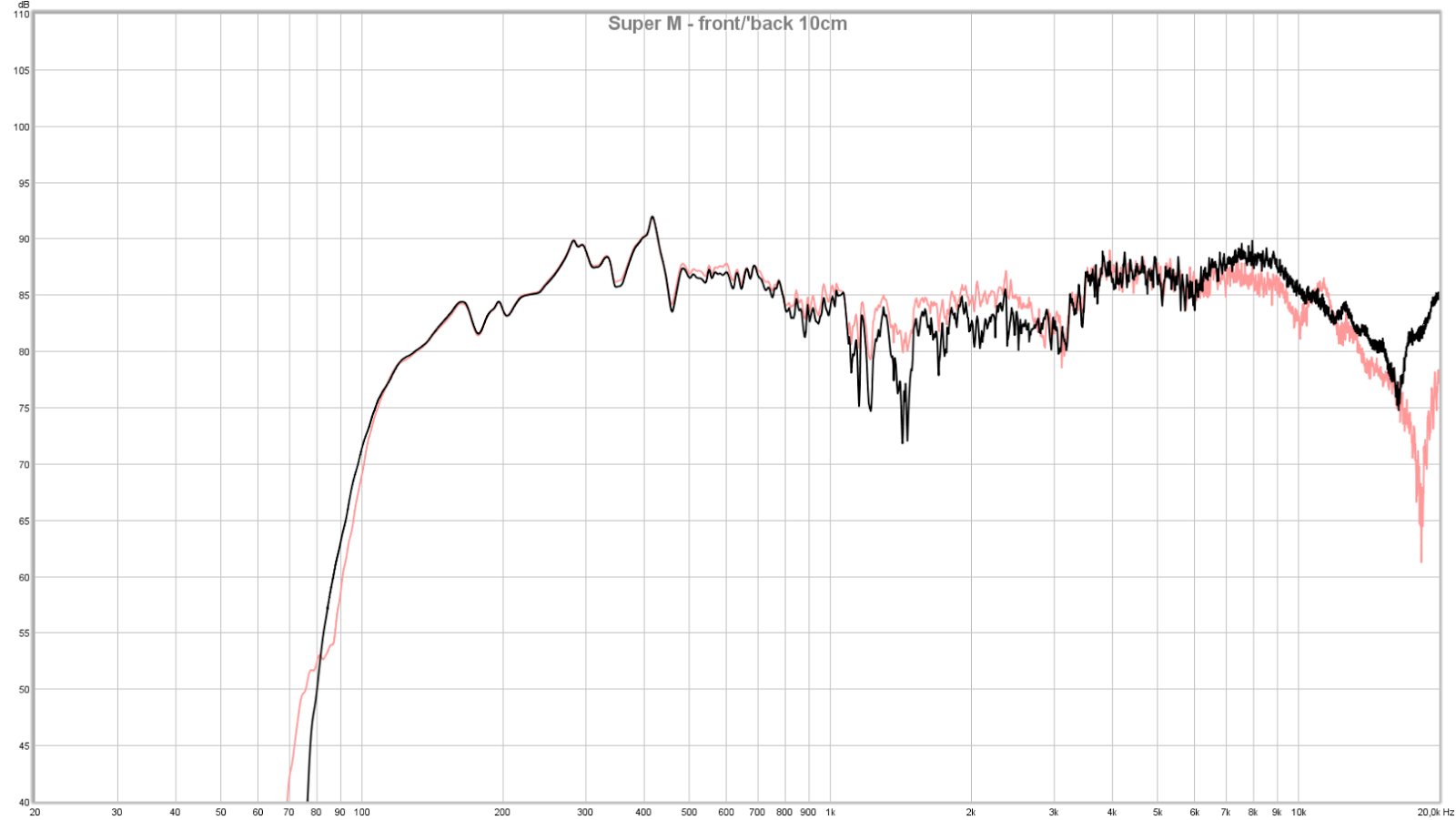 Maybe I expected some small wonder to tell the truth, after having read all those user reviews claiming the Super M to be the best sounding speaker they have heard. So either the reviewers have never heard anything else, or they just have no clue what they are talking about. The Super M is a nice looking speaker for sure and pretty convenient to be carried around all the time as it will fit in most pockets, but sound and build quality both leave a lot to be desired. Below 100$ there are better options out there, maybe not as compact, but at least better sounding. Maybe you can get a sample with better manufacturing, but even then the sound just won't impress. It might be OK for making some noise, but definitely not for serious listening.

Email ThisBlogThis!Share to TwitterShare to FacebookShare to Pinterest
Labels: Bluetooth, mini, NudeAudio, outdoor, portable, REVIEWS, SPEAKERS
Newer Post Older Post Home
No fake or paid reviews as most speakers are bought with my own money!
If you like my blog please support my work with a small donation so I can continue doing independent tests and videos.