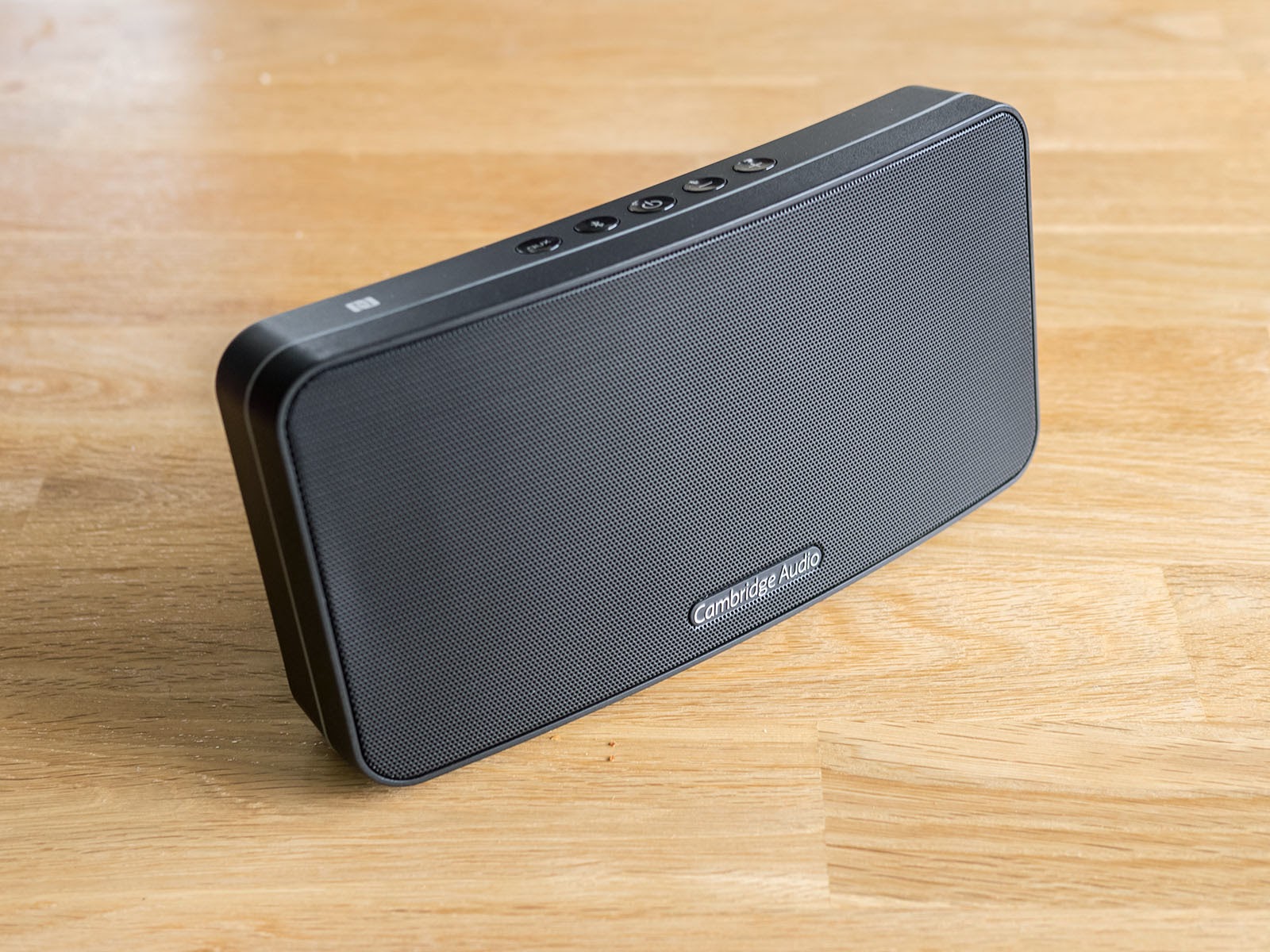 Some Blogreaders and viewers of my YouTube channel were repeatedly asking me how the Cambridge Audio speakers compared to the current line of portable Bluetooth speakers and begged if I could make a comparison. I only knew the old Cambridge Audio Minx Go which I heard once in a store and was pretty disappointed by its performance. Meanwhile there is a new improved version out called "Go V2", so I thought I should give it another try to see how this speaker fits in the whole portable speaker market and if it is really worth its asked price. Let's have a look!

Some will have already noticed that my reviews tend to be a bit longer if the product deserves it and catches my full attention, while other reviews might become a bit short like in this case.
When I unpacked the "Go" (how I will call it from now on) I would have willingly pack it in and sent it back again after hearing the first notes coming out of it. But the first thing I noticed when I took the speaker out of the packaging was a dent at the left side of the speaker grille. The speaker was definitely brand new but examining it closer the dent was certainly there and not just optical illusion. Then I thought maybe I squeezed it a bit too much when I took it out and tried to apply some pressure on the speaker grille which yielded immediately and felt like a thin cheap sheet. The speaker doesn't feel cheap on its own, but you never get the impression of a real high quality product. 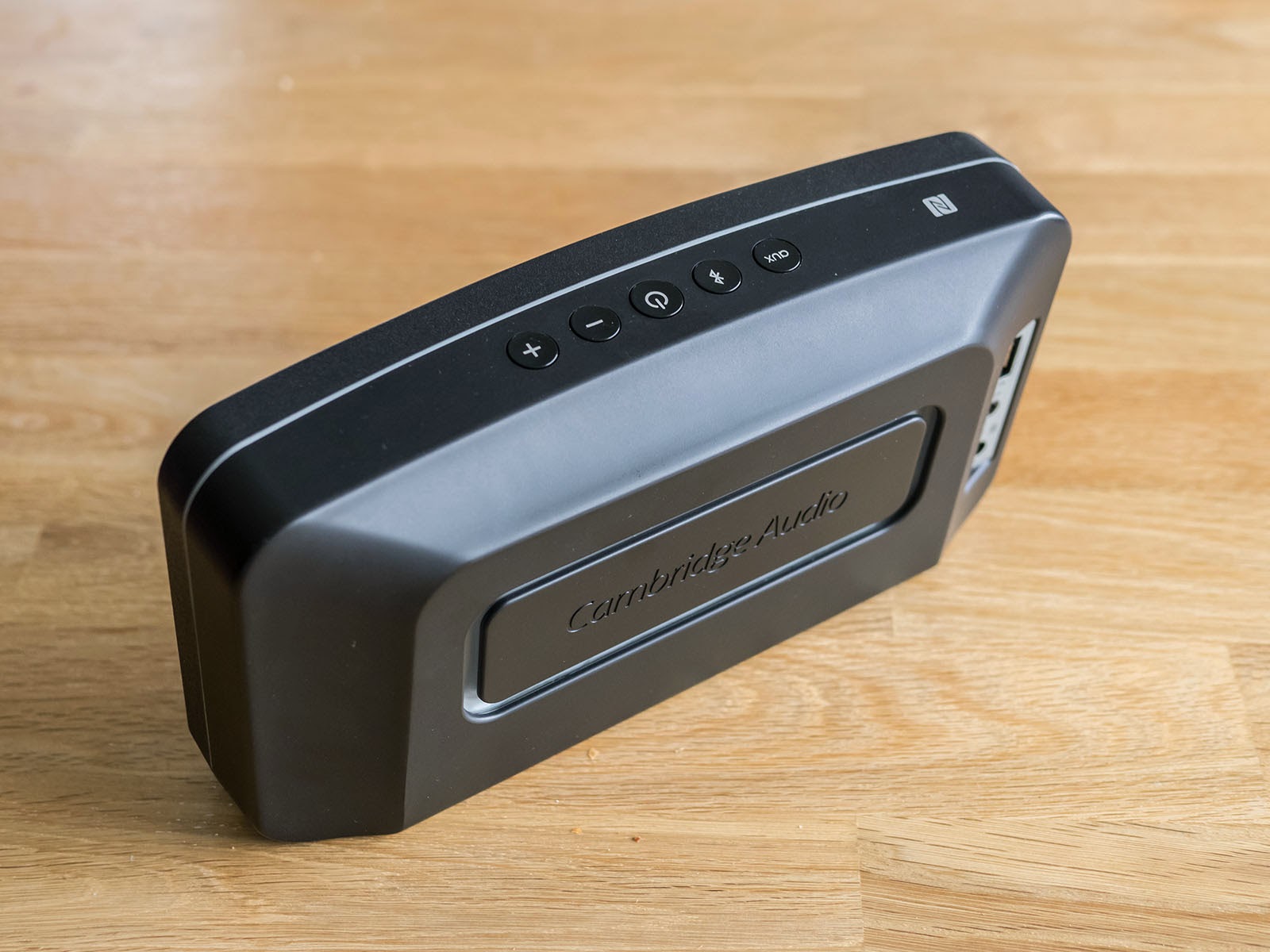 Turn it on and it will play a cheap "beep", one of that kind you also get from all the Chinese 20$ Bluetooth speakers. After pairing is done, it will play the same beep again. It also seems as if the beep was played back with the current volume level. So if you leave the speaker on its maximum volume and turn it on the next time it should play the beep with full blast! The volume control is not mirrored between speaker and streaming device, and the Go has only 15 dedicated volume steps, but you can of course further fine tune loudness through your player. 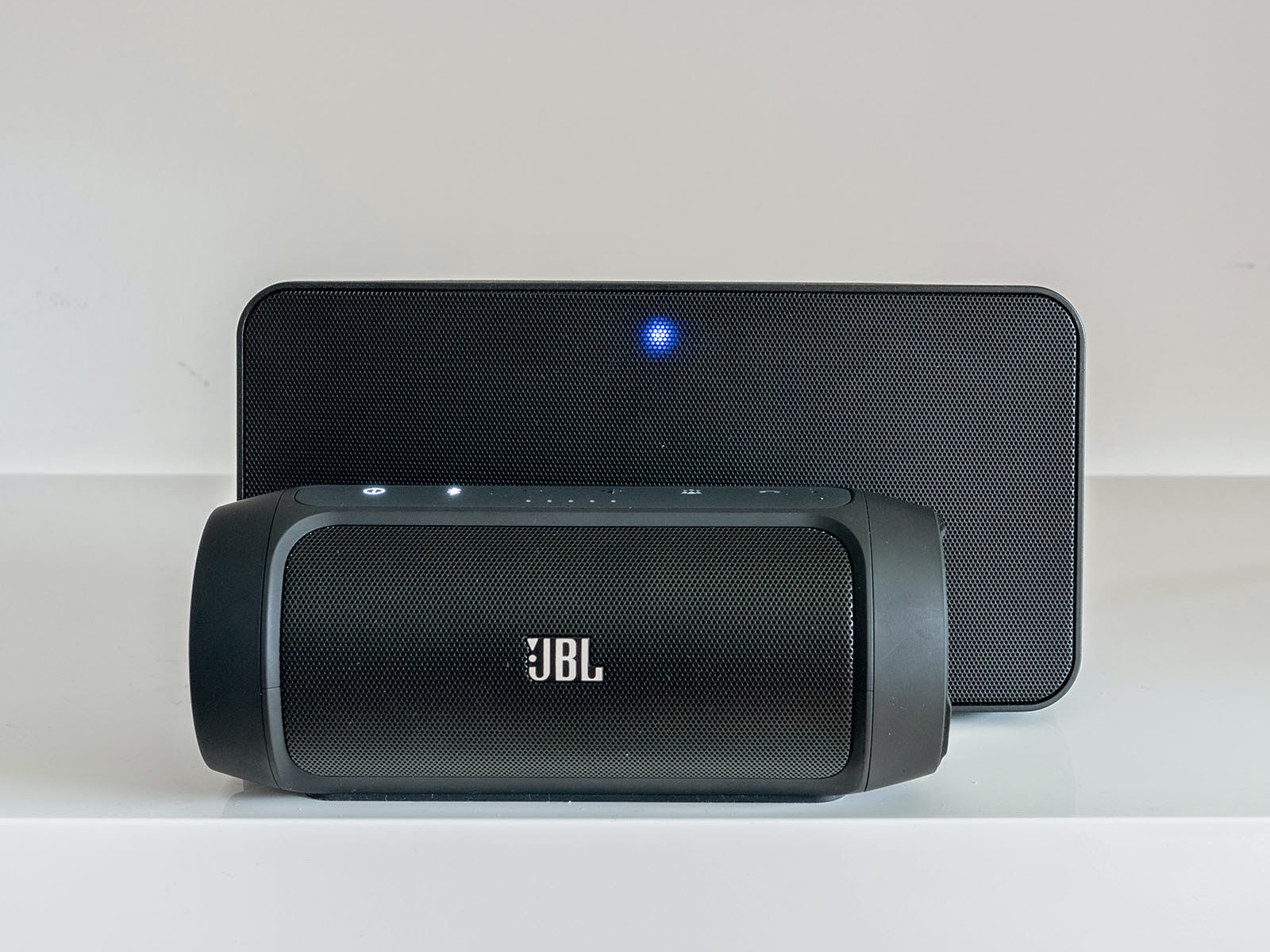 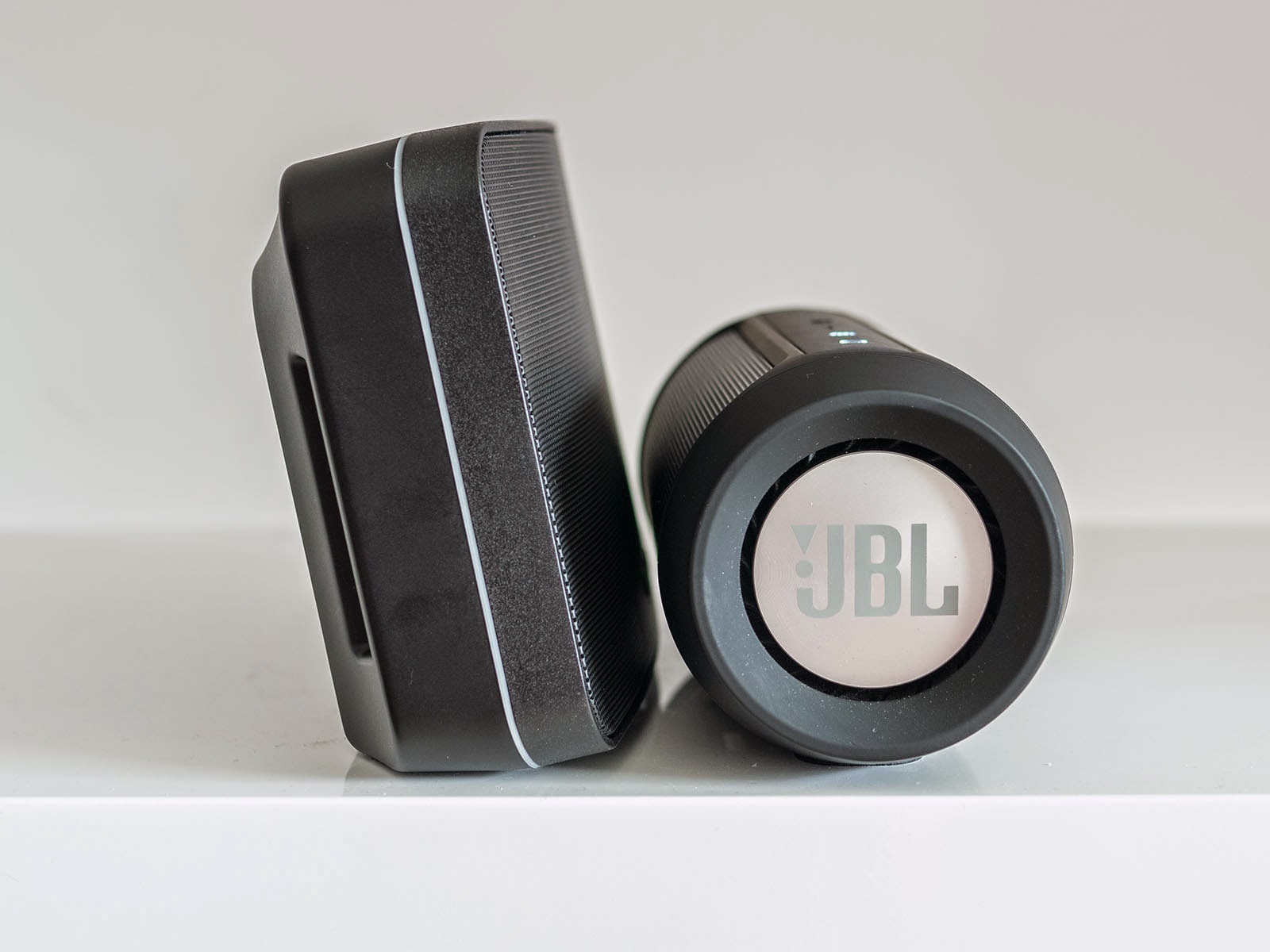 The Go is not huge, but it is not a small speaker either. I would estimate around 1l cubature, compared to the JBL Charge 2, which I chose as reference the Go is both heavier and larger and more cumbersome to carry around. It is nearly impossible to securely grab the speaker without touching the passive radiator at the back, as this is the natural space where your fingers would usually go. If you want to carry the speaker while it is playing you will unavoidably touch the passive radiator which will rattle against your fingers. 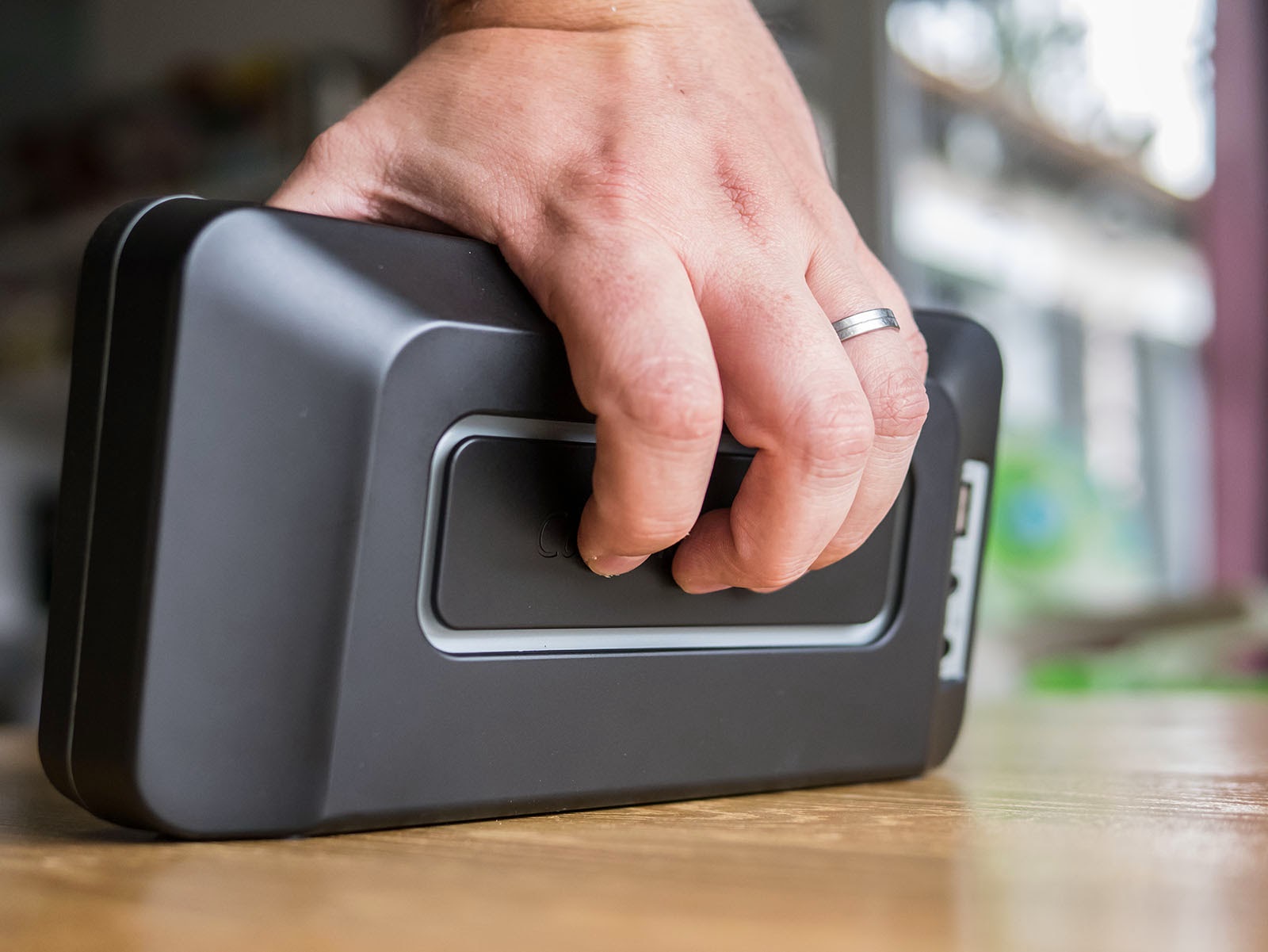 As the passive radiator is just at the back it makes the whole speaker a bit out of balance especially at higher levels. You won't hear it distort but it will vibrate quite much against the base and can make nearby objects rattle around. 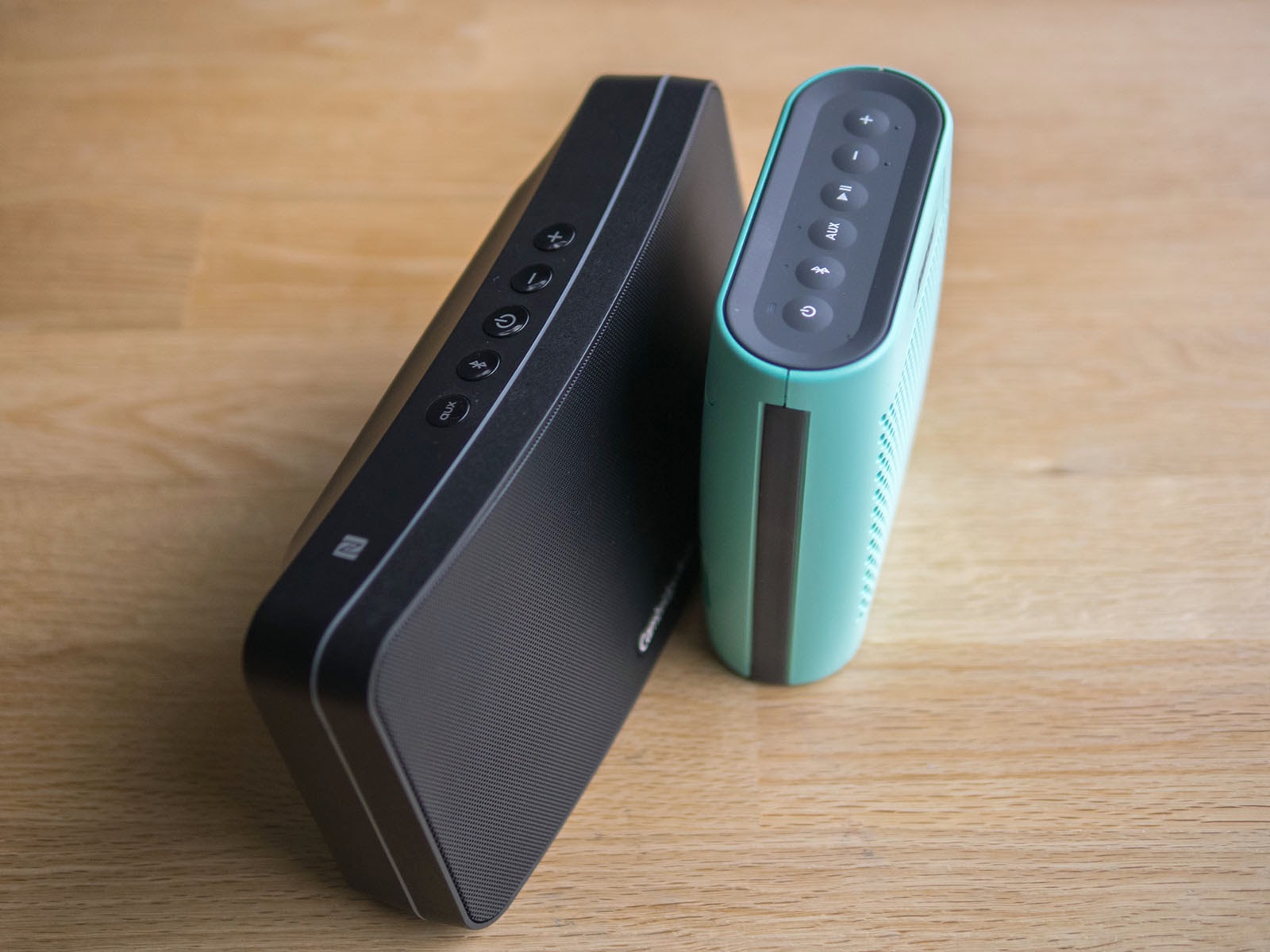 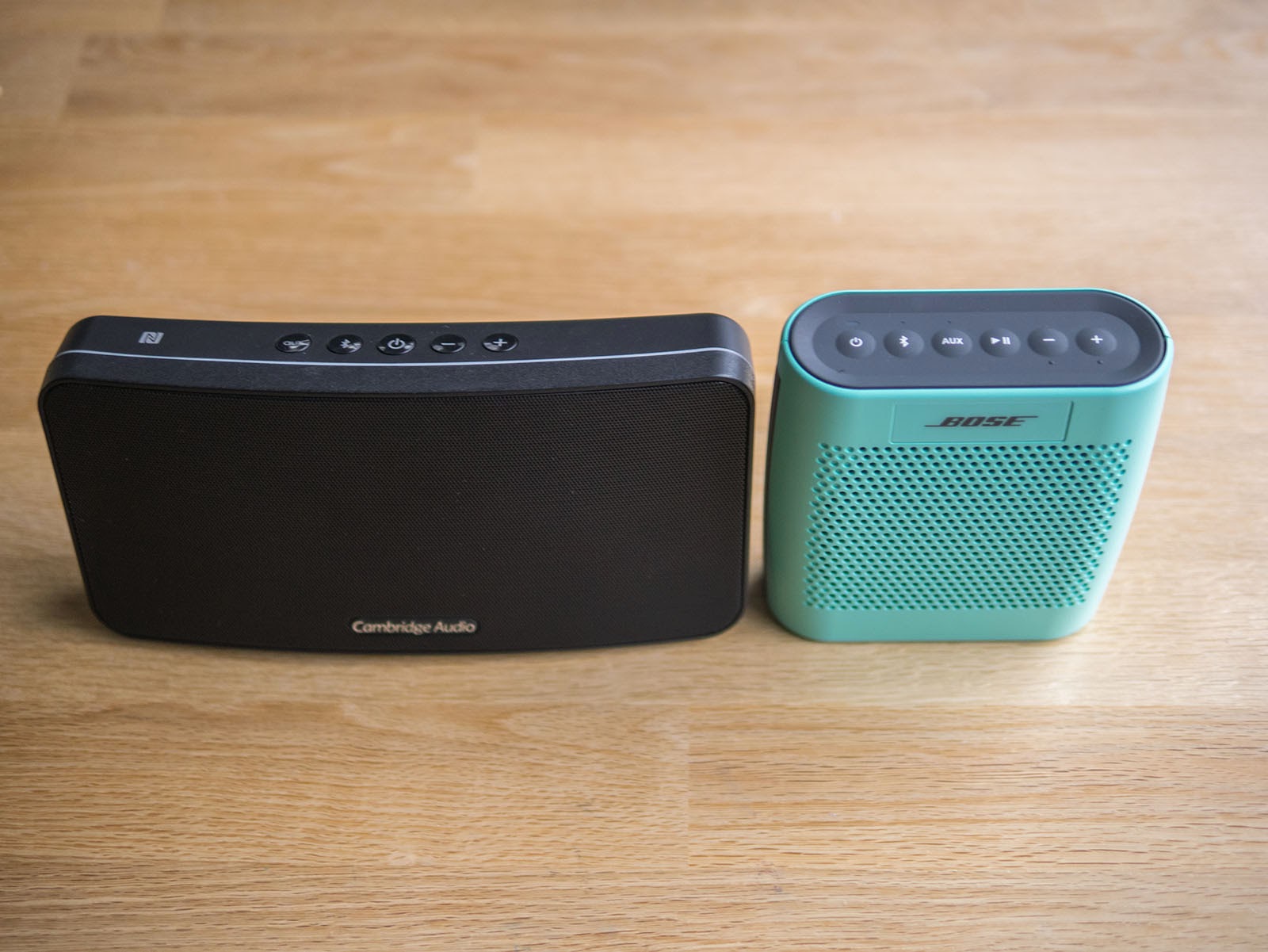 Compared to the Bose Soundlink Colour which can be currently had for 115€ versus the 149€ for the Go, the Bose is much easier to carry around. It is lighter, smaller and more comfortable to grab. 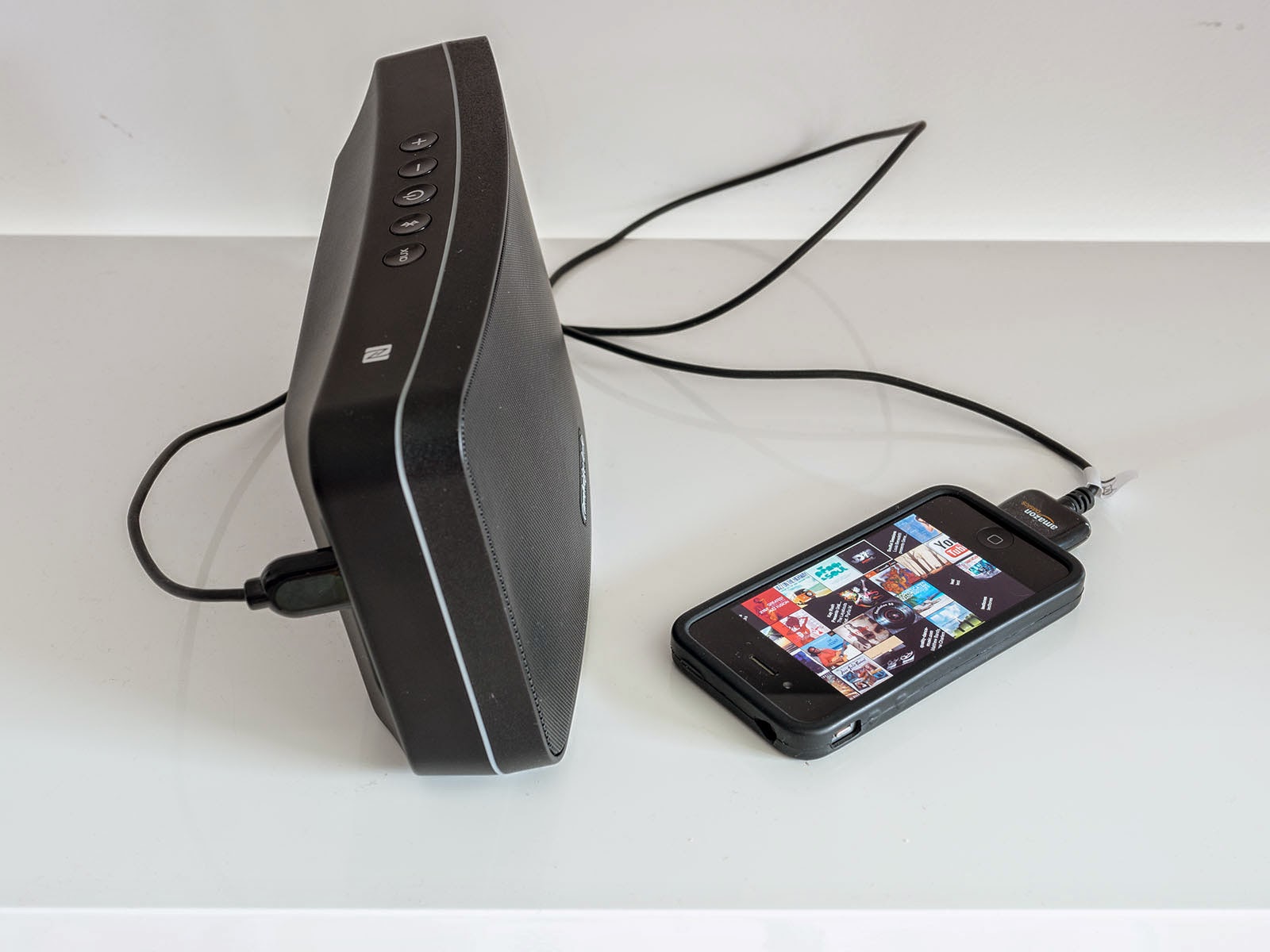 The only nice feature the Go has is the ability to charge external devices. The built in battery seems to be quite strong and charging even works with the speaker turned off. Unfortunately the Go itself must be recharged with the dedicated power unit, you cannot charge it through USB like you can meanwhile with many other similar speakers even if only meant as compromise it is definitely helpful being able to recharge the speaker with any available USB-charger if you are on the way and forgot to take the charger with you. 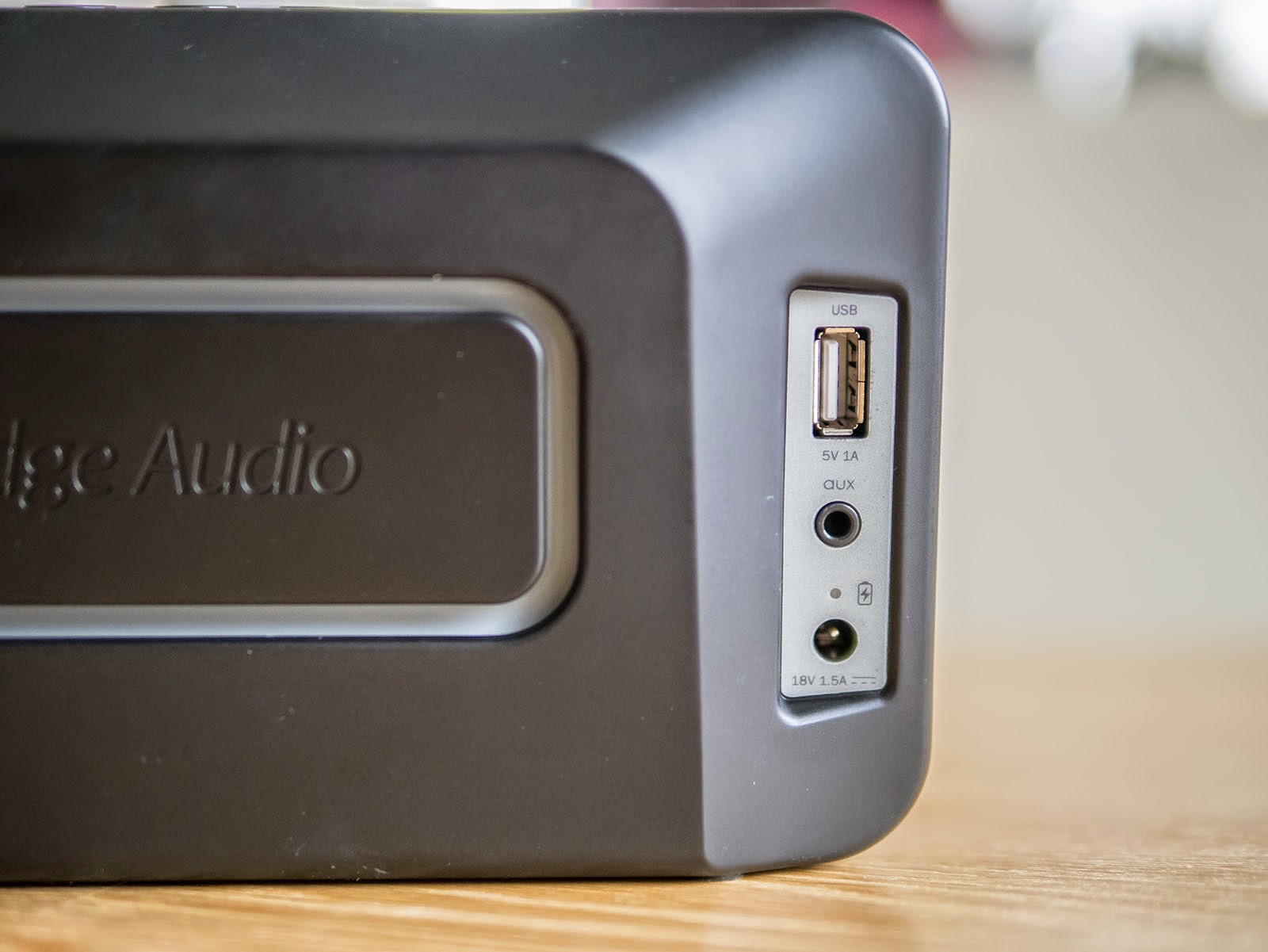 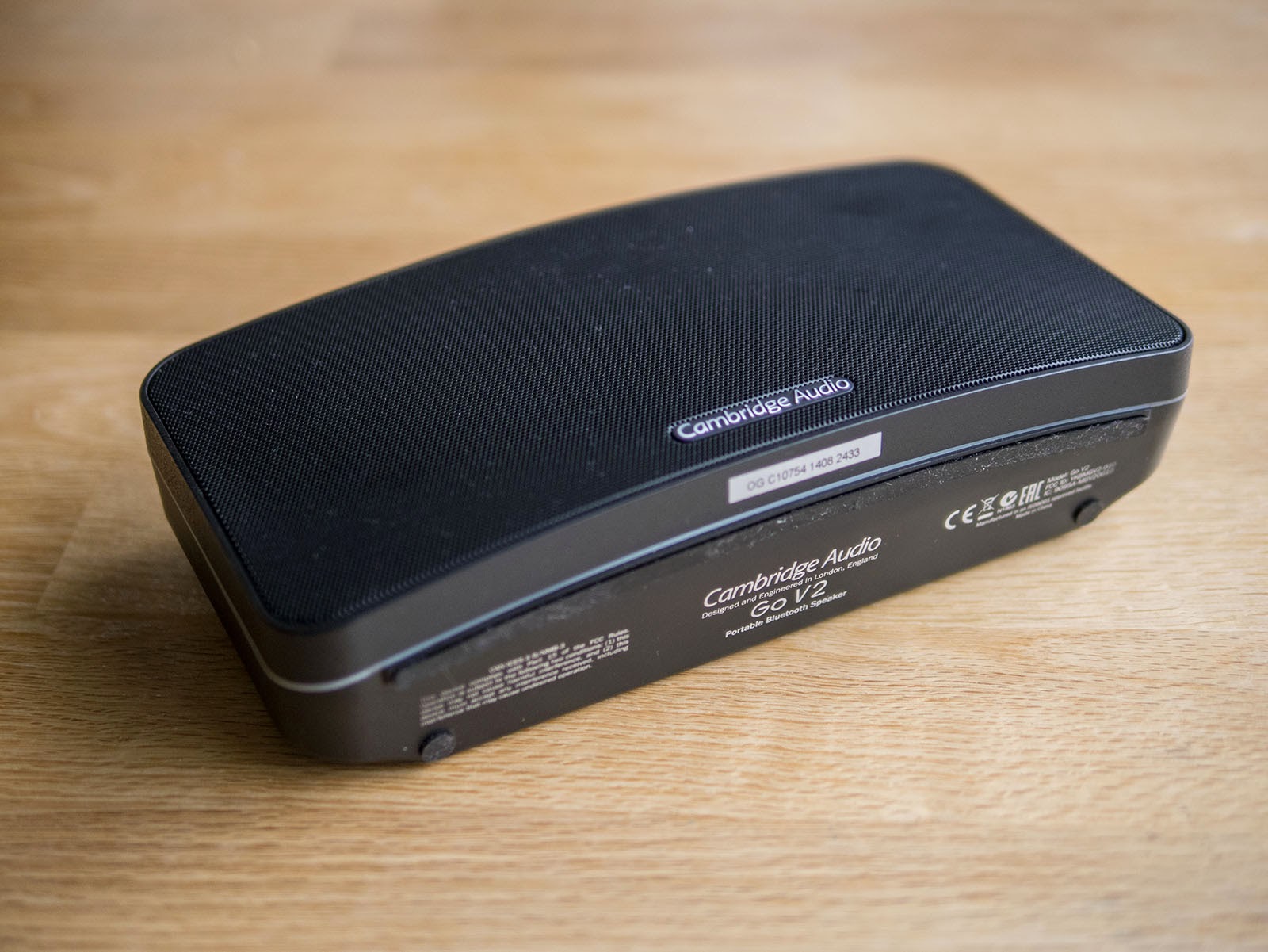 Compared to the old Minx Go version, the new one is missing the tiltable stand, but it gained some additional buttons, while the old one had only 3. Despite the new Bluetooth-button and Aux-button the fact cannot be hidden that there is still no track control available through the speaker nor does it have a built in speaker phone. The Go can just act as a speaker for playing music, therefore let's have a direct jump to discuss its main qualities. 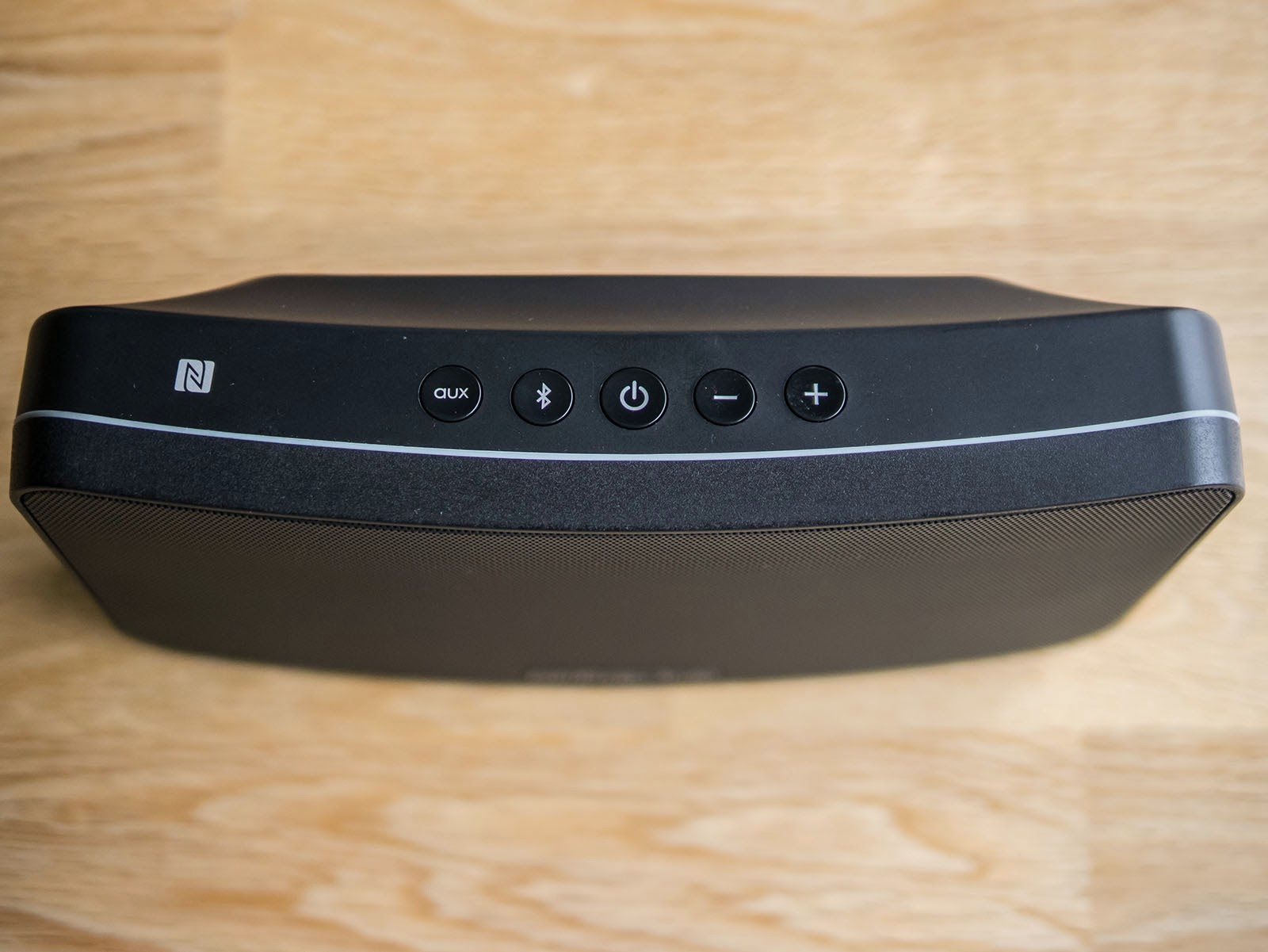 Let me state that the Cambridge Audio Go just sounds bad. I have no idea how it could gain such high praise from WhatHifi, claiming it to be the best sounding speaker in its class, because in reality the performance you get is rather that of an average kitchen radio. None of the "room filling sound" slogans printed on the box seems true as the sound is quite mid-focused but muddy at the same time. It might fill some small toilet maybe, but definitely nothing else.
Despite its own built in tweeters the Go sounds somehow veiled and the sound has some coloration as if you were listening to some badly encoded internet radio station. There is some stronger upper bass emphasis, but bass already rolls off below 120Hz. It can become quite punchy at higher levels, but with really strong drum attacks the speaker will start to struggle and you will notice how the internal limiter algorithm is trying to prevent any distortion by keeping the volume down on stronger peaks which might result in some noticable volume fluctuations with particular tracks. The maximum volume of the Go is rather on the lower side. It is slightly louder than the maximum volume of the Fugoo in "loud mode", but considerably lower than that of the JBL Charge 2. The Go doesn't apply any dynamic compression at higher levels and bass isn't reduced either, but the JBL Charge 2 despite some bass reduction will nevertheless sound more powerful exceeding the Go in maximum loudness.
At low levels the Go sounds hardly better than a Mini Jambox. A Fugoo which is much smaller manages to sound more open, more profound with considerably better and deeper bass response and an overall more pleasant sound up to its medium volume. Up from there the stronger upper bass from the Go takes over and will drown the small Fugoo, but on many tracks I still preferred the tuning of the Fugoo which was not as bass-heavy but still with enough deeper bass thump and a fresher overall sound than the Go. The Cambridge Audio Go even manages to sound worse than the B&W T7, which is a merit! My wife who by no means is an audio junkie even asked why is the sound that bad, when I was testing the Go playing some tunes through it.
Currently there are quite a lot cheaper speakers on the market which easily manage to sound better than the Cambridge Audio Go and play nearly twice as loud. I could name a few like the TDK A33, The Soundblaster Roar, even the small Bose Soundlink Colour...

I prepared a short audio comparison with the JBL Charge 2, a smaller and cheaper speaker with more features than the Cambrige Audio Go:

Here another video with the Cambridge Audio Go compared to the Bose Soundlink Colour. Although the Bose has some sound coloration apart from its colorful body, it still manages to sounds more mature and natural at the same time with a higher loudness overall:

I also did some measurements, here you can see the entire volume range of its 15 volume steps taken from 50cm and smoothed with 1/6 octave: 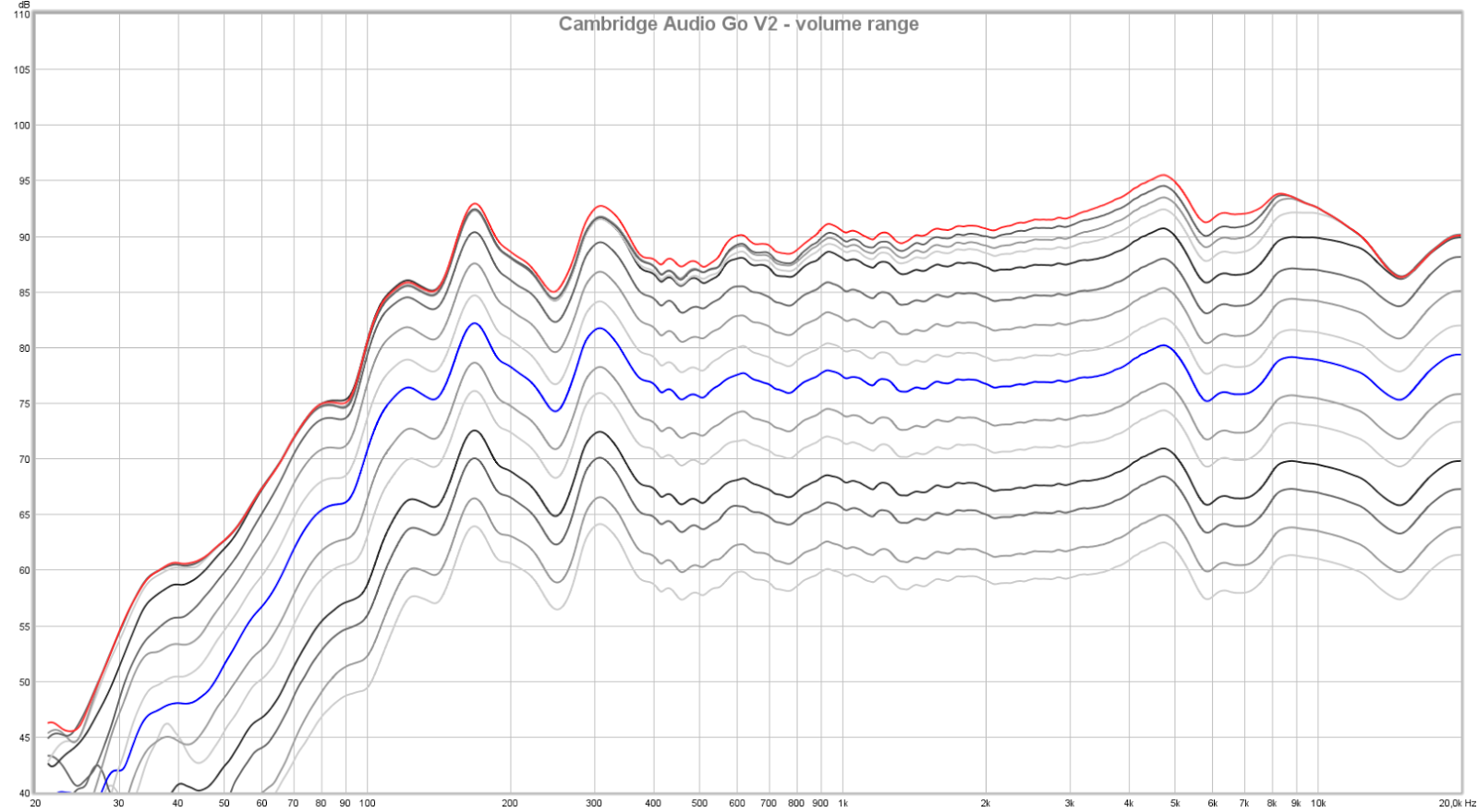 A close measurement from 10cm shows that the frequency response is not really flat while bass response is rather unimpressive given the size of the unit and keeping in mind that a Soundlink Mini can reach 60Hz, while with the much larger Go there is not much below 100Hz with more than -10dB falloff already. Although bass rolls off pretty smoothly with even some response down to 40Hz, in reality this is hardly noticeable because it is drowned out by the louder upper bass and just a waste of effort as most bass you really hear will be the upper bass part above 120Hz. For comparison I also added the same measurement from the JBL Charge 2 in grey which has less upper bass but has lower reaching usable bass: 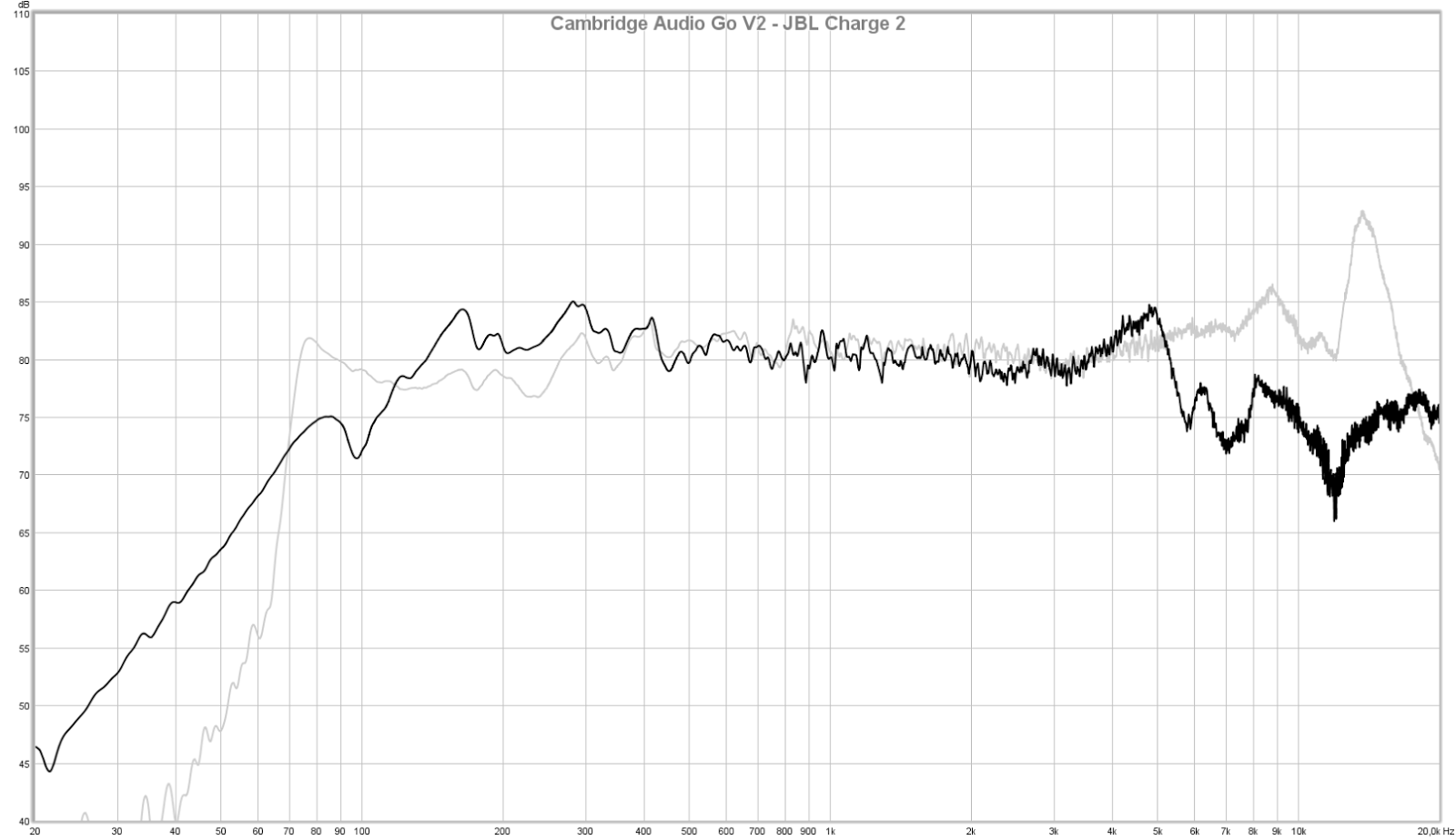 The Cambridge Audio Go V2 is not totally hopeless, I have definitely heard worse sounding speakers than that, but I have also heard much better ones which were either cheaper or smaller at the same time. I just don't understand the many raving reviews it managed to gather. If you are in the market for a portable Bluetooth speaker, I would definitely avoid the Cambridge Audio Go V2, as it doesn't do anything really satisfactorily. It can charge external devices for sure, but if you want to listen to music there are much better options out there. If you like it loud, the Go V2 fails completely as it doesn't even reach the loudness of much smaller speakers like the Bose Soundlink Mini. I am not quite sure who might be the right customer for it, but anyone a bit more serious about music won't be satisfied with it.

Email ThisBlogThis!Share to TwitterShare to FacebookShare to Pinterest
Labels: Bluetooth, Cambridge Audio, portable, REVIEWS, SPEAKERS
Newer Post Older Post Home
No fake or paid reviews as most speakers are bought with my own money!
If you like my blog please support my work with a small donation so I can continue doing independent tests and videos.