Review: Hercules WAE NEO - take the Disco with you! 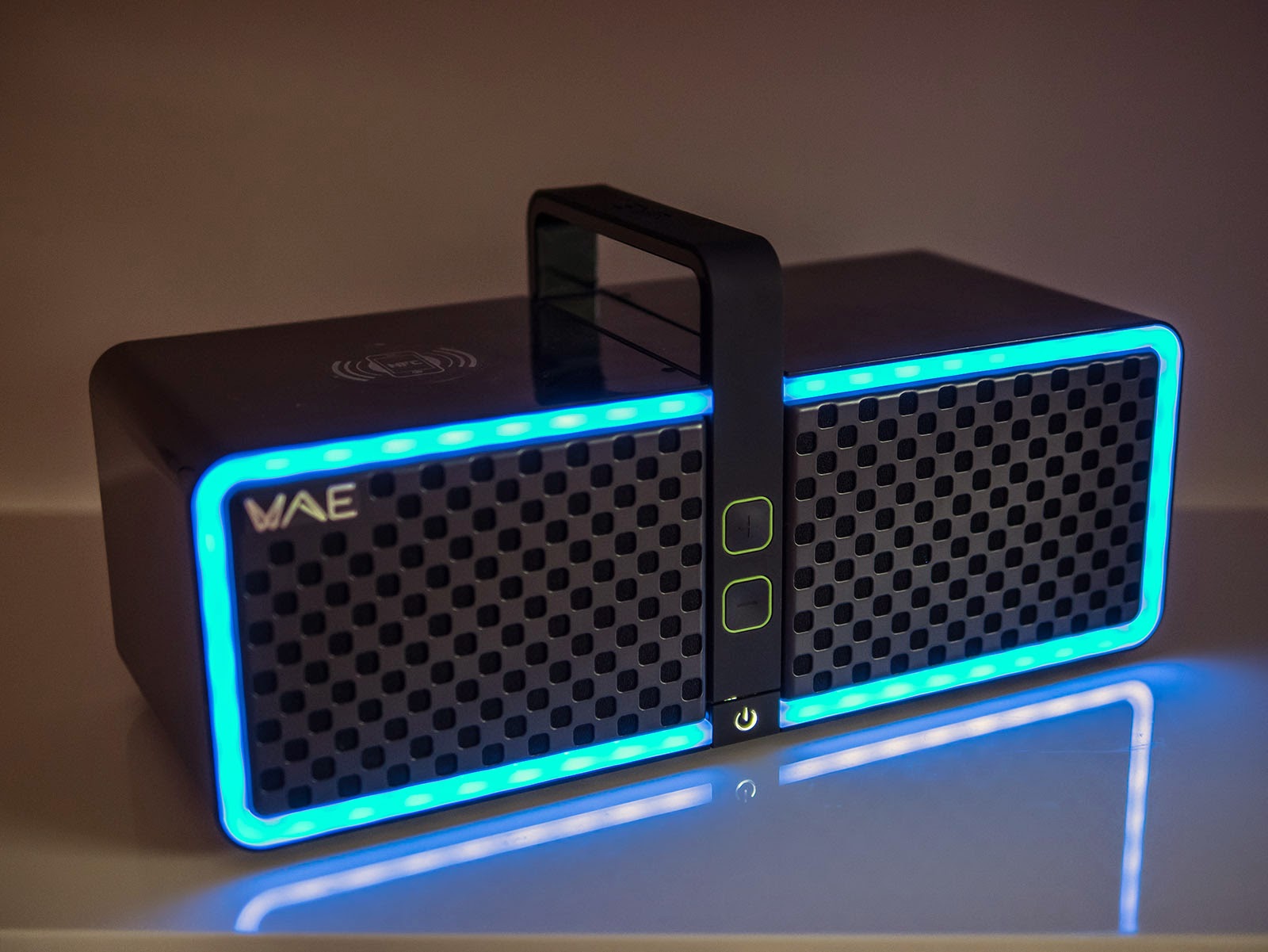 Recently I received an intriguing funky speaker called "WEA NEO" from Hercules which is a sub-brand from the french company Guillemot. WAE stands for "wireless audio experience" and represents a whole line of different wireless/Bluetooth speakers, the WEA NEO being the top model of the whole line. Although I was aware of the brand before, I must confess that I haven't heard any speaker from Hercules yet. Now this has changed and I would like to show you where this speaker "shines" in the truest sense of the word.

When I had the idea of doing "fidelity-tests" of various speakers, I quickly noticed that it wouldn't be that easy to achieve really representative results.

Apart from room acoustics etc. the microphones have a too strong self-sound, to really allow valid results. I had tested more than half dozen different handheld recorders, from Olympus to Yamaha and Zoom. And all of them sounded so different that I doubt they would allow any neutral results.
To give it another try, I lately ordered a Zoom H5 and an optional XYH-6 capsule as I hoped these would give me significant improvements over the "cheap" Zoom H1 recorder that I am currently using, but in the end, the results were even worse. Not only did both mic-capsules emphasize treble too much, they did roll-off with low frequencies too strong, and there was a noticable divergency between left/right channel with the sound being not centered as it should be. Both microphones had a different bias towards left or right, therefore I sent both back totally disappointed.
Currently it seems as if I was still at the very beginning to find a better but still affordable recording solution which would allow the most neutral and flat recording.

You can hear some of my previous test-recordings here. In this case the JBL Charge 2 was recorded with all recorder/microphone combinations in the same room with the same settings/distance etc. As the XYH-6 capsule supports 2 different directional patterns, I did recordings with both, you can also check out the original track for comparison:

Excerpt of the original track:


I think it is pretty obvious that all the used microphones have a different sound, there is even a noticeable sound-difference between the 90° and 120° setting of the XYH-6 capulse. I also tried a recording with my current measuring microphone the MiniDSP UMIK-1, but so far I am still in the process to include the calibration file into the recording procedure and will post it as soon as I managed.

At the same time, I had also ordered a Roland CS-10EM binaural microphone. I wanted to try out something new and although these microphones are not really suitable for neutral direct recordings of a speaker, they seem perfectly suitable to record how a speaker would sound in a particular room thanks to a rather neutral sound. You have to wear headphones to hear how the sound was meant to be, or you can try playing it back through speakers with a crosstalk cancelling filter like "Liveaudio" from the Mini Jambox.

To understand better how the listening situation was, what kind of room etc, I also did a photo of each listening position, so that you can see what I heard when I did those recordings wearing the microphones inside my ears. I am curious what you think about this kind of audio-demo, and if I should continue using it in future for further speaker comparisons too. I did not normalize the recordings, so the difference in loudness you hear is real and represents the real situation.

Again I used the JBL Charge 2 (my current portable reference despite all the distortion issues, it is one of the best sounding portable speakers which can be already had for 129€) and recorded it in different rooms and positions from different distances, please have a look (and don't forget to listen through headphones):

Equally to the JBL I also tried recording some further speakers inside the shelf in the living room, I wonder if you can hear the difference in sound between all of them. I think that especially the increased stereo-separation of the EVA Blu and the Bose compared to the JBL Charge 2 and the mono Play:1 is pretty obvious:

Please let me know what you think about these recordings. Does the binaural effect work for you? Do these recordings sound more real than the previous ones I did? Which listening position does represent the most realistic situation for you?

Please leave a comment if you have further ideas!

Some will probably already have noticed two new and really interesting Bluetooth speakers, the T7 from Bowers & Wilkins and the BeoPlay A2 from Bang & Olufsen. I am not sure if this is pure coincidence that two companies release their first portable Bluetoothspeakers nearly the same day. 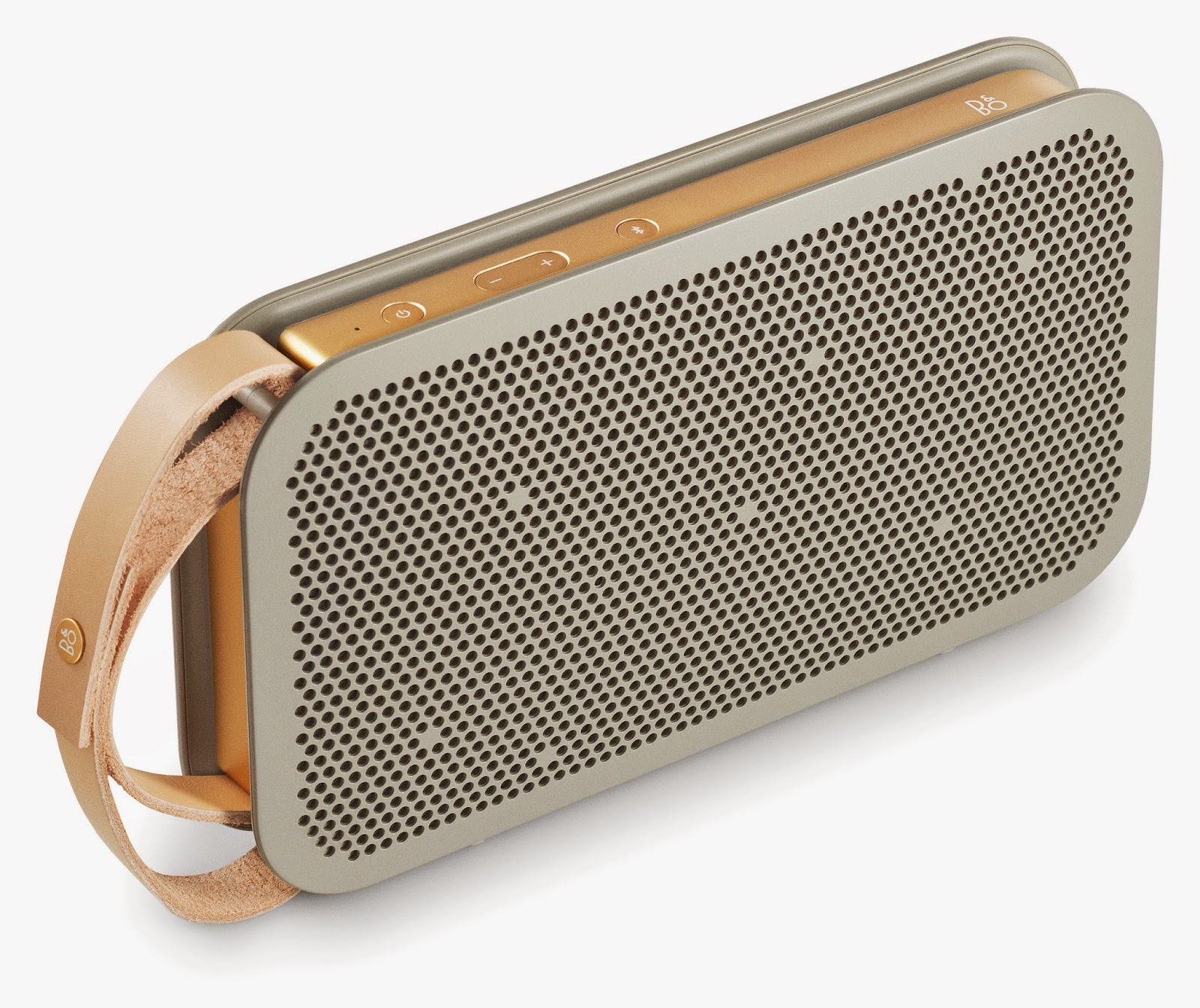 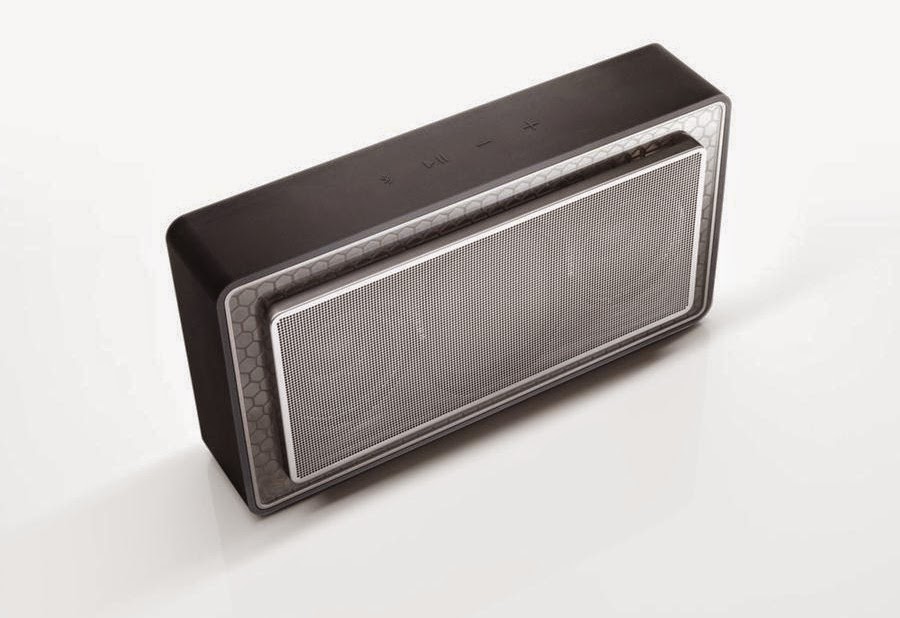 I won't go much into details and further tech specs, as you will find all information on their dedicated sites, but both speakers will cost exactly 349$/€ thus making them directly comparable and putting them a step above current offerings from Bose, Infinity or whatever.
The big difference I see between both is that Bang & Olufsen really tried to make a portable speaker with an own grip, 360° sound, a 24 hours battery life and USB-charging of external devices while B&W was rather trying to copy existing concepts and make their own version out of it.

I would really love to hear both side by side and prepare a detailed comparison.

Update: The B&W T7 should arrive tomorrow, while I haven't got any shipping confirmation from B&O yet. According to B&O support, the Beoplay A2 should arrive on Friday, so stay tuned for some detailed comparison between both!

Update2: My B&W T7 review is already finished. I can already reveal that one of them is considerably more serious sounding... you guess which.

Update3: Finally also my B&O Beoplay A2 review is finished.
Posted by oluv at 10:47 PM

One might think "not another Bluetooth speaker" every time a new model is announced.
Indeed the whole Bluetooth speaker market started becoming quite a bit boring. There are units costing less than 20$, others costing close to 1000$ or even more, colorful ones, swimming ones etc.
But there is hardly any innovation visible. Some Bluetooth speakers still refuse any quick re-pairing to already known devices...

But two recently announced Bluetooth speakers managed to catch my attention. They are both portable, which means they will run from a rechargeable battery, and they are both pretty compact to really deserve the term "portable". 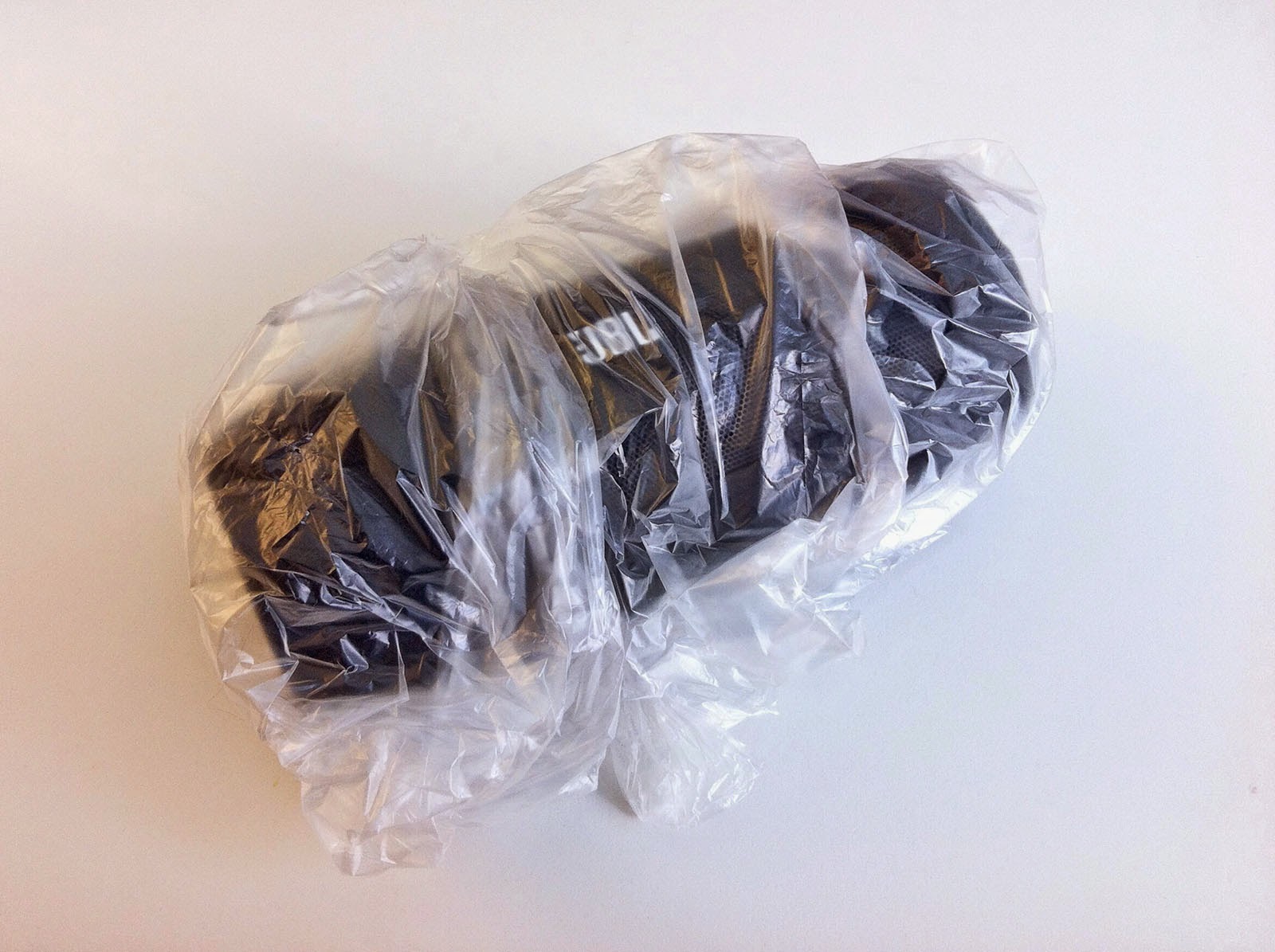 A portable speaker which can be easily damaged during the first transport is pretty useless. I am not the only one who thinks that the unprotected passive radiators of the JBL Charge 2 are the weakest part of the speaker, so some owners already came up with some tweaks to protect their new gadget. 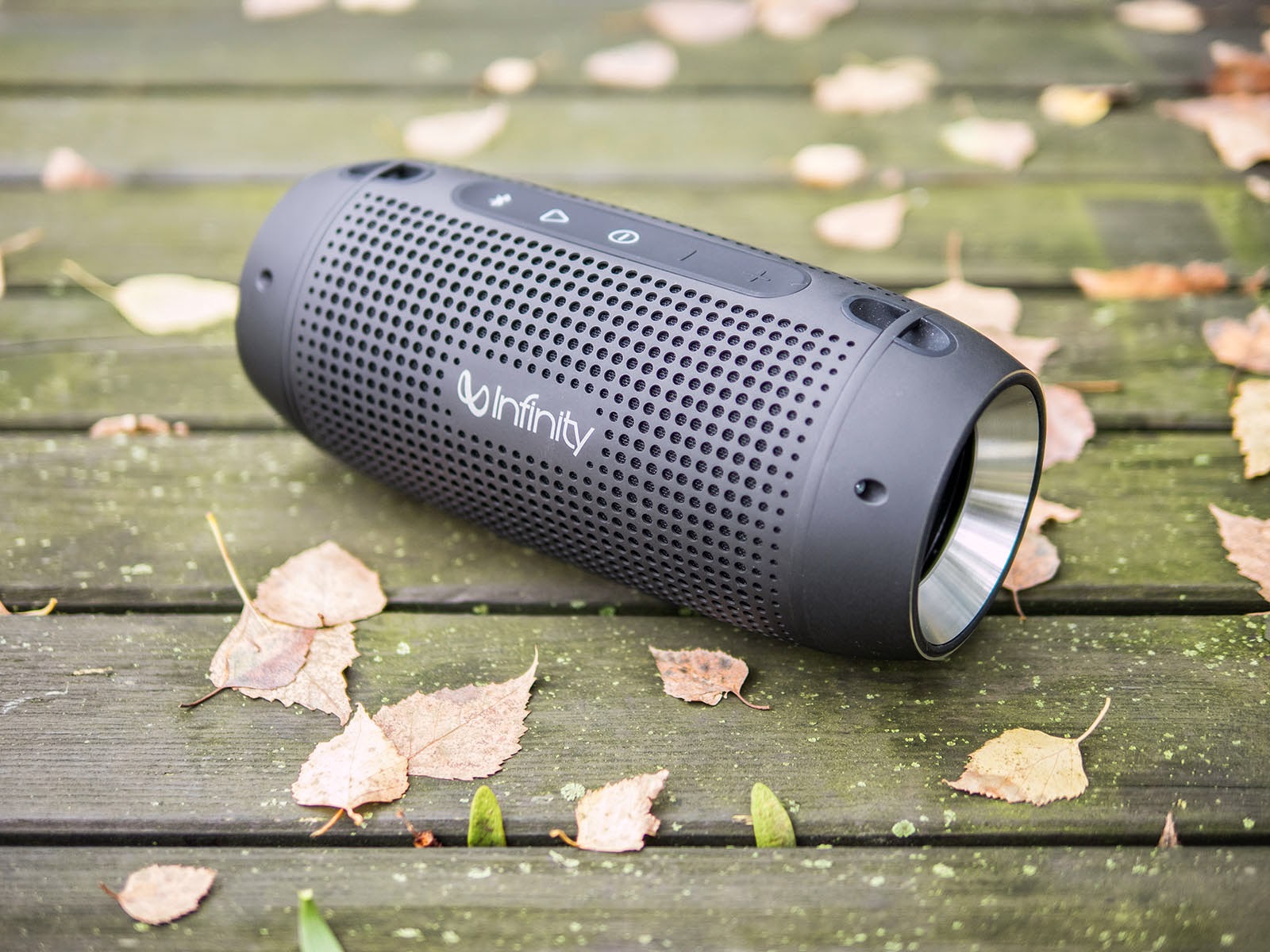 I must confess that the Infinity One was the most awaited speaker I wanted to try lately. My request for a review sample directly from Harman was denied with the statement the Infinity One not to become available outside the U.S. I am not sure if they might change their mind, but even in the U.S. availabilty still seems quite a bit limited.
At least my good old friend is dependable as he took the risk of ordering one overseas paying some premium taxes and import fees. But this is what you are ready to pay for a "Premium wireless portable speaker", which the Infinity One is called according to the Infinity site.
For all desperate potential buyers living outside of the U.S. there is still the option to buy the Infinity One directly from amazon.com

as they seem to be shipping their units to Europe too or maybe even worldwide. Ultimatively you can try a delivery service like "myus.com".

Email ThisBlogThis!Share to TwitterShare to FacebookShare to Pinterest
Labels: Bluetooth, Infinity, outdoor, portable, REVIEWS, SPEAKERS
Newer Posts Older Posts Home
Subscribe to: Posts (Atom)
No fake or paid reviews as most speakers are bought with my own money!
If you like my blog please support my work with a small donation so I can continue doing independent tests and videos.