There are hundrets of similar sized or even larger portable speakers than the Soundlink Mini, but so far none of them really managed to reach the level of Bose. Although many claim the UE Boom to sound much better, or even the JBL Charge, in reality they are both just better kitchen-radios.

Apart from JBL not many real speaker companies (I won't call Logitech a speaker company, they usually make mice and keyboards, and UE was making in-ear monitors before) have tried to bring out something really comparable or even better. The bigger part of the Bluetooth speaker market is produced by some no-name companies from Asia without any real audio-background.
But Klipsch is a well known brand with a long history in audio with their professional speakers. Their portable KMC-3 boombox is one of the best I have heard, the smaller KMC-1 was pretty average but I was curious to hear their smallest speaker "GiG", which indeed seems like a direct competitor of the Bose Soundlink Mini. 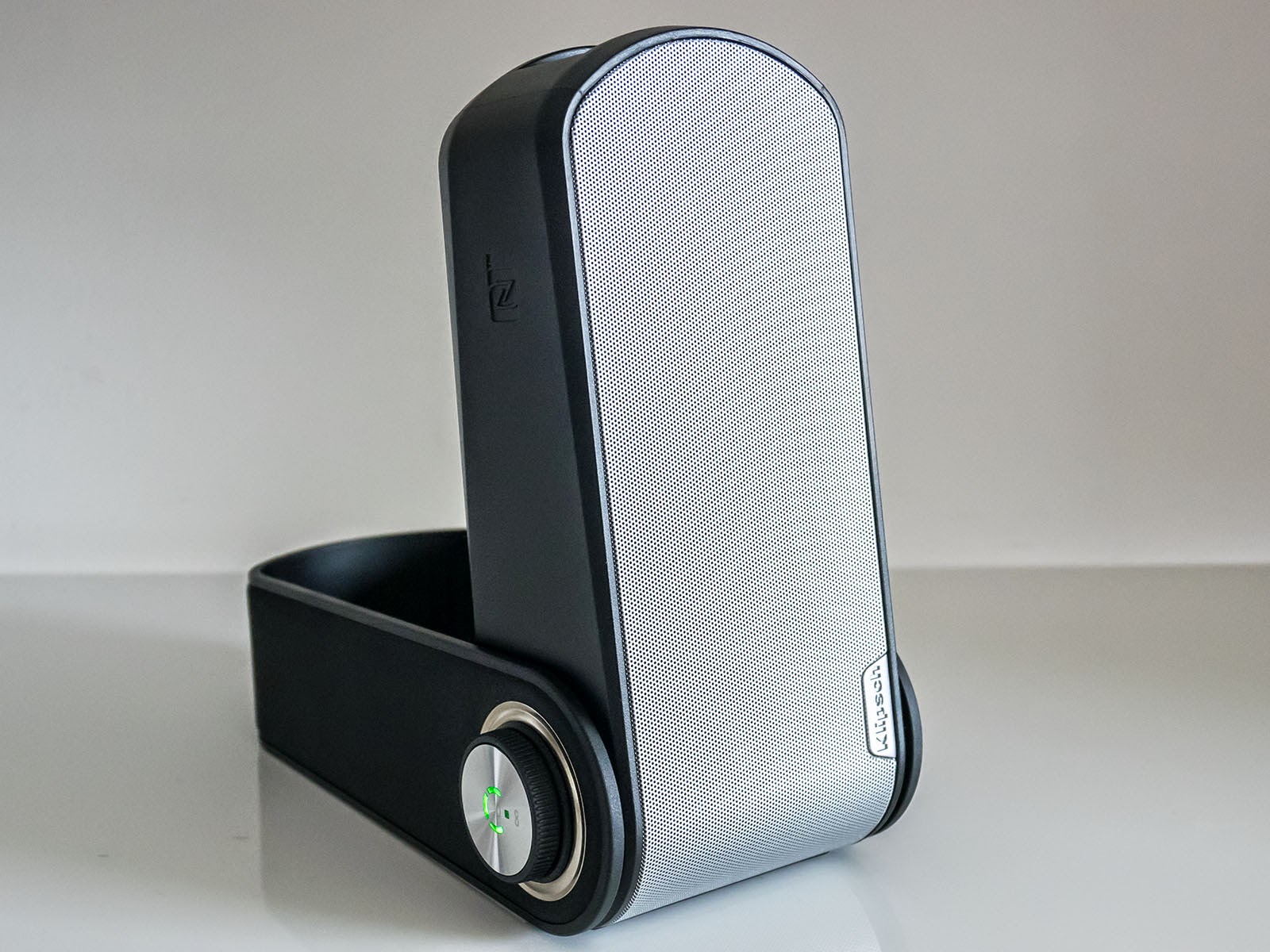 Recently I finally managed to get my hands on a Klipsch GiG and wanted to do a short review. I'll try to concentrate on the facts and avoid any long and unneccessary explanations. 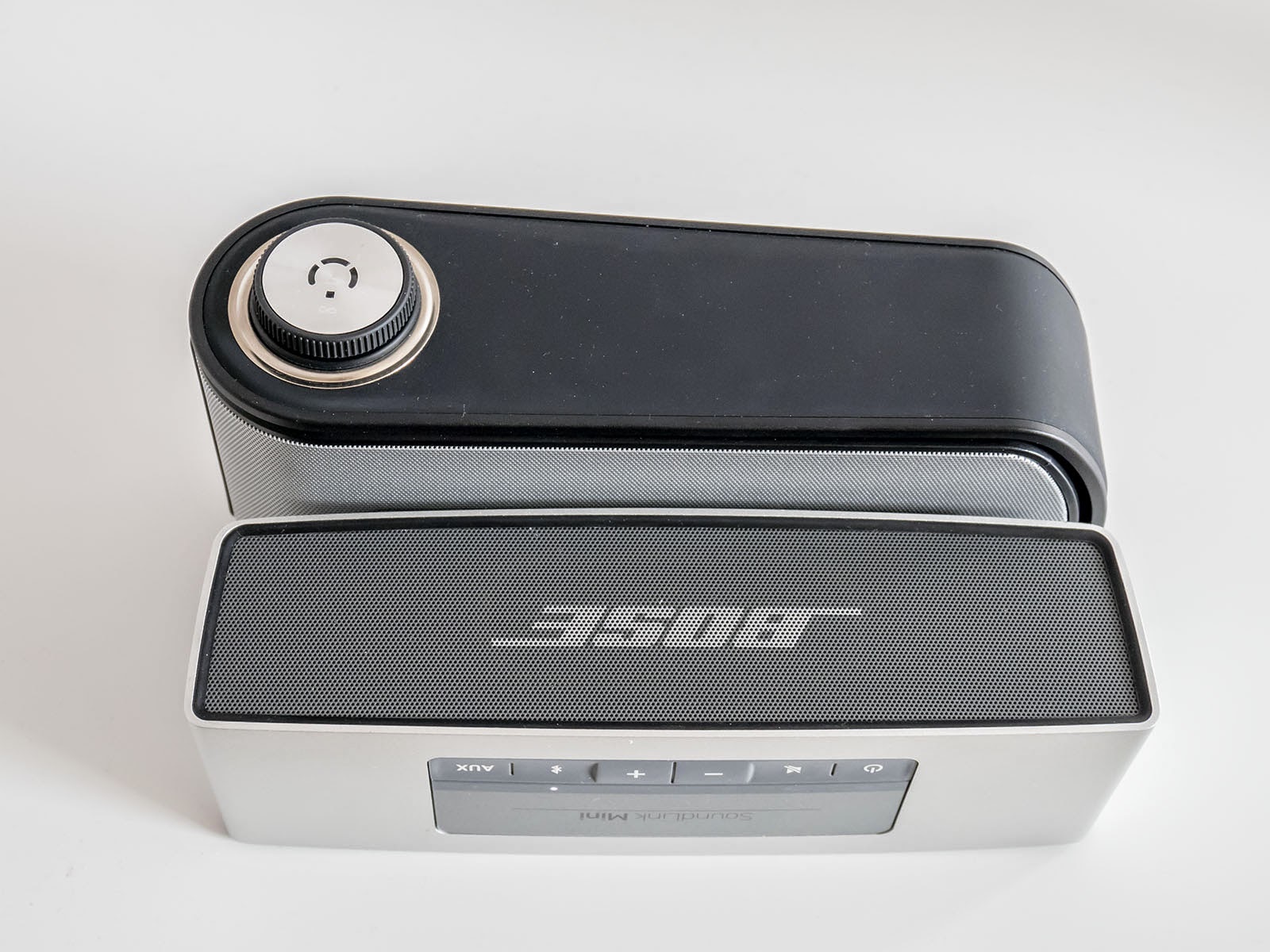 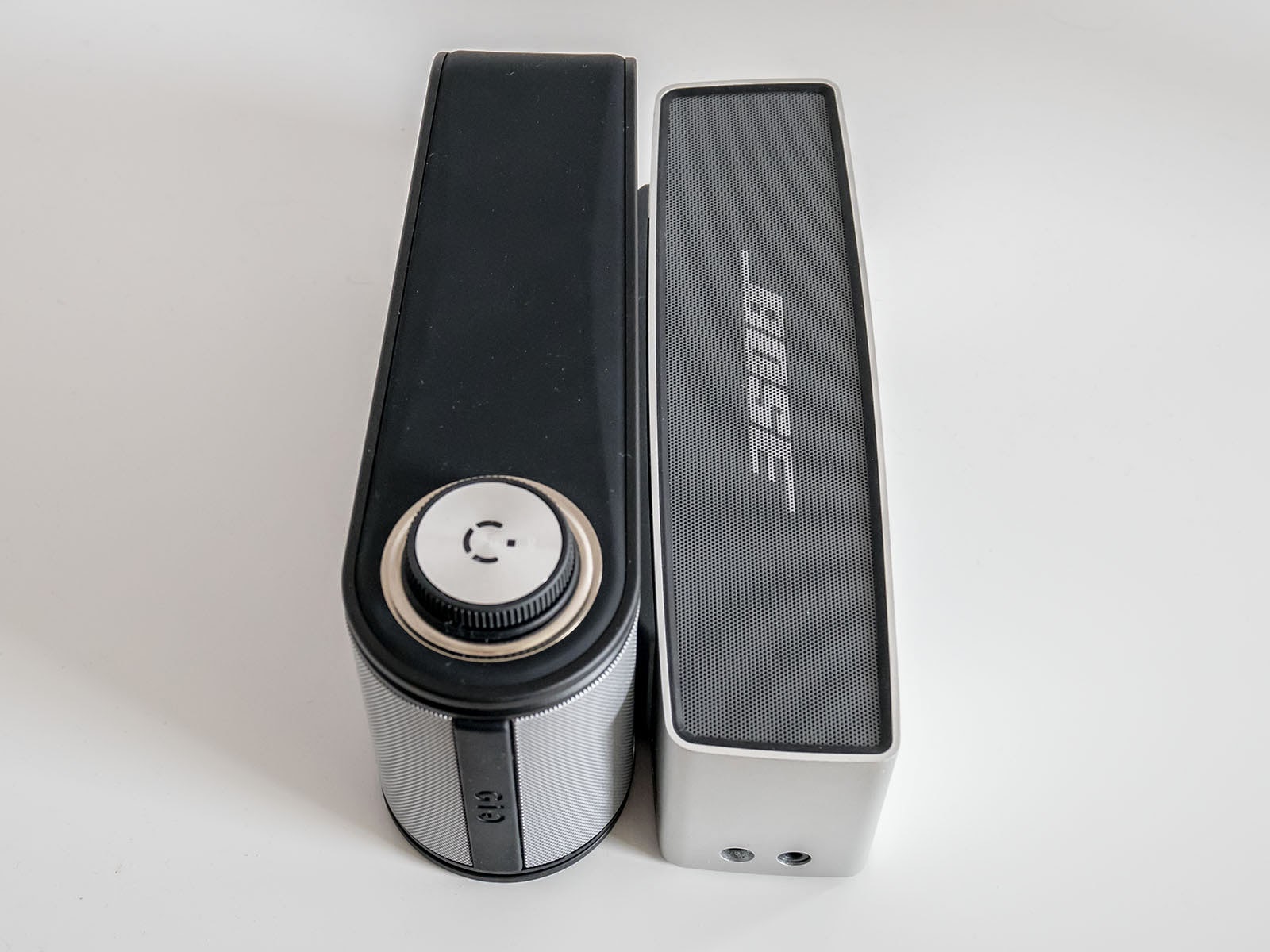 The Klipsch GiG is pretty well made and leaves an overall good impression. It is a bit larger in capacit than the Soundlink Mini, but it is slightly lighter at the same time. Funnily the grille of the GiG seem to be made of exactly the same perforated plate as the grille from the Soundlink Mini. 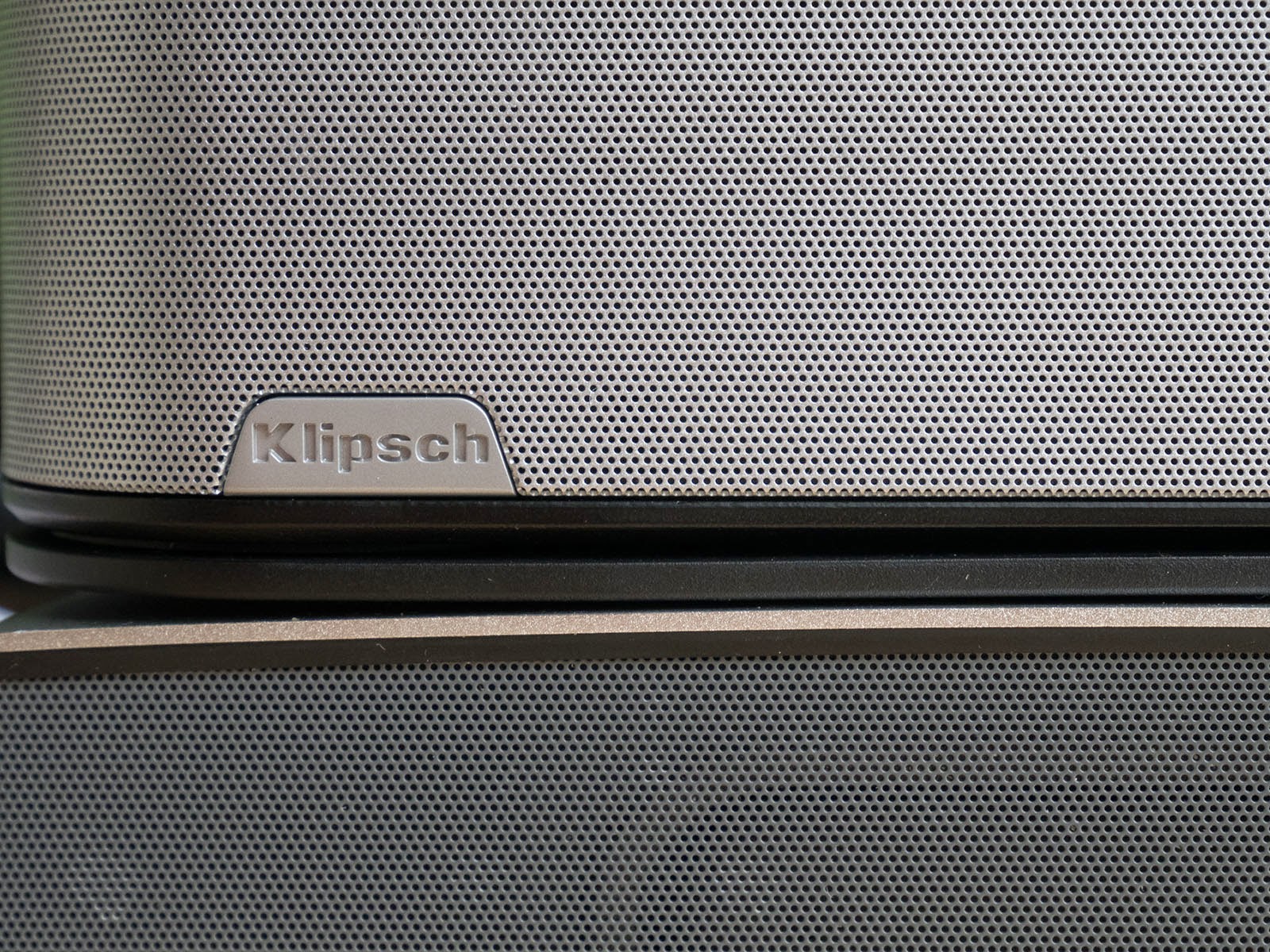 I liked the main big knob which is used like an old analogue volume-control but it also acts as a multifuncional button when pressed, and it shows you different states of the speaker with different LED-colors, last but not least it can also show you the current battery-state with 3 steps. 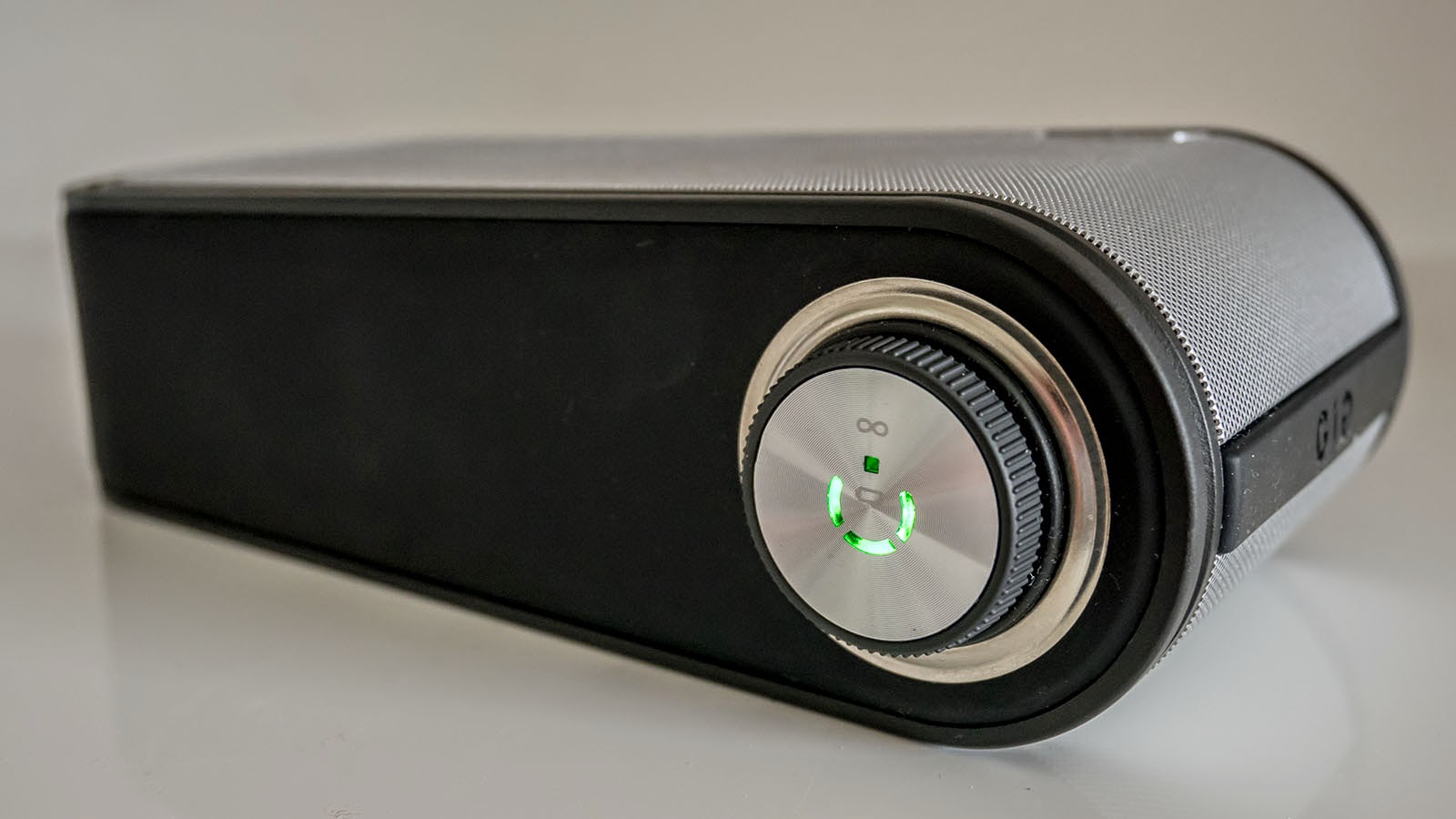 If you really want to use the multifunctional button, you probably have to learn all commands by heart, because depending how often you press, you can either stop music, skip a track forward or back, you can even start a call etc. The Klipsch GiG has indeed a hands-free built in, in contrast to the Soundlink Mini. The GiG also has NFC, which is equally missing on the Bose, and in case of the GiG you really seem to need NFC as Bluetooth pairing was a pain in the ass every time I turned it on.
I have maybe tried hundrets of different Bluetooth speakers, and all of them automatically paired to the last known device when turned on. Not so with the Klipsch. You turn it on and it does nothing. You have to repair from your phone every time again. Sometimes it won't even accept any connection, I had to reset it, it was really a frustrating experience. Once the connection was established, everything worked fine, Bluetooth reach was long enough, but dare to turn it off again. That's why NFC is probably really useful on the GiG. Maybe Klipsch thought all will tap their phones to the device to establish a connection every time they turn the speaker on... well, I doubt this is really how NFC was meant to be used, maybe Klipsch just misunderstood something.

What annoyed me more were the already known guitar-chords, that you can also hear on the KMC-3 and KMC-1, when the speaker is turned on or off or paired with a device. The sounds are much too loud and somewhat cheesy. I wished I could turn them off completely. 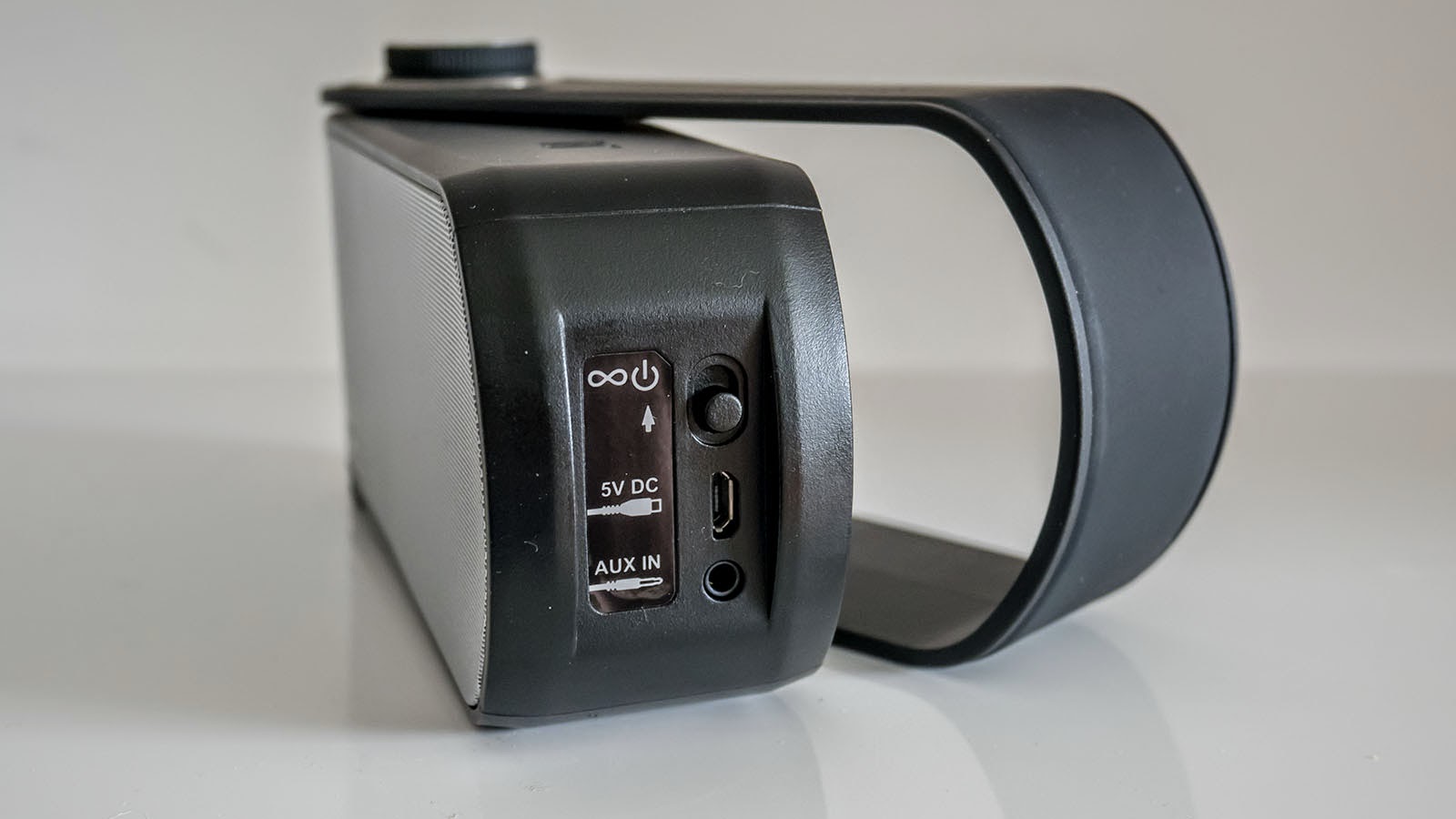 I am not sure what to think about the rotatable stand. It doesn't make sense at all, because why should I put the speaker vertically if I would lose any stereo-imaging, at least the one that theoretically should be there. Also the stand is only fixable in one single position, you cannot tilt the speaker freely as you want, because the stand will just collapse on its own, if it won't lock in the single possible position. Also for turning the speaker on, you always have to tilt the stand away, I found this design pretty clumsy to tell the truth.

How does it sound?
Not bad, but nothing to write home about. The GiG definitely pumps out a more serious sound than the JBL Charge or UE Boom and those alike. But it is still behind the Soundlink Mini. You won't get any "Wow"-effect from the GiG, until you turn it up a little bit. The Klispch GiG needs some volume to really sound convincing until it starts to lose bass again within the last quarter of its volume.
Bass is indeed impressively deep on the GiG. While the Bose has hardly any response below 60Hz, the Klipsch even seemed to play down to 50Hz, but the complete low-frequencies were rather restrained, thus bass was never that bloated as on the Bose, which many might even like more. The biggest difference between both was at lower levels. While the Bose sounds really "fat" and voluminous at low levels, making the whole base vibrate, the Klipsch sounds rather like an average clock-radio. It is not as bad as on the larger KMC-1, but Klipsch doesn't seem to apply any dynamic and volume-dependent equalization. It is only at maximum level where both speakers dial back any bass that was present before. Both also reach more or less the same volume and at maximum volume the differences in overall sound become smaller, but the Bose starts to compress dynamics quite heavily depending on the song, while the Klipsch remains pretty dynamic even at top volume. For this reason the Bose hardly has any distortion problems even at top volume, but with the Klipsch I noticed some crackling and unpleasant noises with loud piano sounds, when played at maximum volume. I checked the same songs on the Bose and no such effects occured.
What surprised me most was the pretty muffled treble-response of the Klipsch GiG. I mostly complain abot the Soundlink Mini to sound veiled, but the Klipsch sounded even worse. Due to the the deep but conservative bass and the subdued treble at the same time, the GiG left a rather mid-focused sound, which starts to become really harsh at higher levels.

I prepared a  video with the Klipsch directly compared to the Bose at different volume levels:

If the Klipsch GiG was considerably smaller than the Soundlink Mini while still retaining the same sound quality, or if it was cheaper, it could be a winner. But as it is now it costs exactly the same as the Soundlink Mini, while being larger but with worse sound in the end. Of course the GiG has additional features like NFC, Apt-X support and hands-free, but for me it is the sound quality that really counts. Although the Bose is not perfect, the Klipsch GiG is it even less.


- weak treble response, muffled and directional
- deep bass but hardly any amplitute
- sound very unimpressive at low levels
- sound harsh and mid-focused at high levels
- no automatic Bluetooth-reconnection after power on
- annoying and loud welcome-sounds
- volume not synced with connected device
- tiltable stand does not really make sense
- too expensive

Email ThisBlogThis!Share to TwitterShare to FacebookShare to Pinterest
Labels: Bluetooth, Klipsch, portable, REVIEWS, SPEAKERS
Newer Post Older Post Home
No fake or paid reviews as most speakers are bought with my own money!
If you like my blog please support my work with a small donation so I can continue doing independent tests and videos.