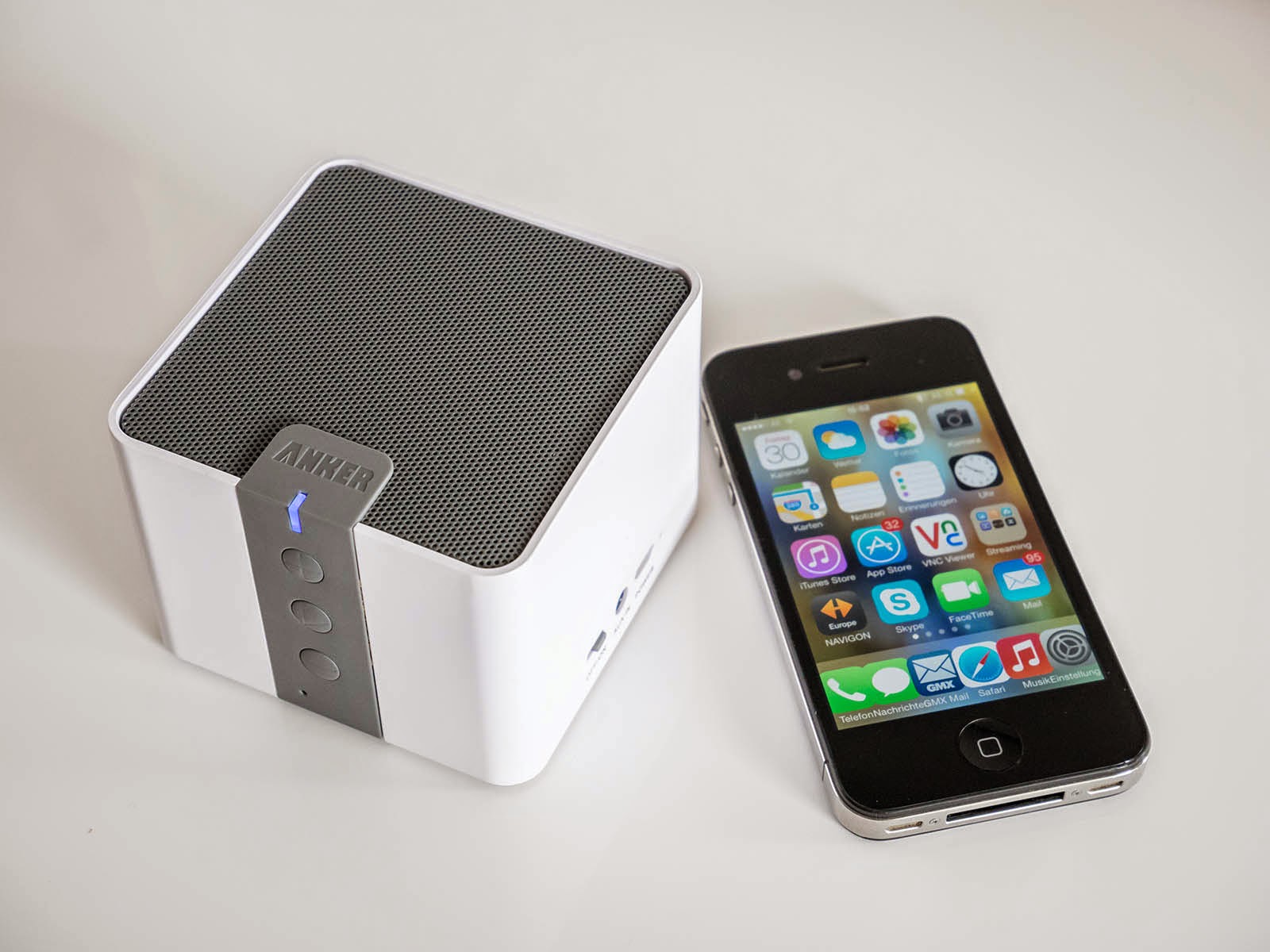 Anker sent me a sample of their new Bluetooth speaker, the so called MP141. Until now I only knew Anker from their Powerpacks, I also own one, but it seems they started to get into audio as well.
So far I have not heard much about this speaker. I started reading some reviews which were all positive, and found the design to be really appealing, so I decided to try out the speaker on my own as well. 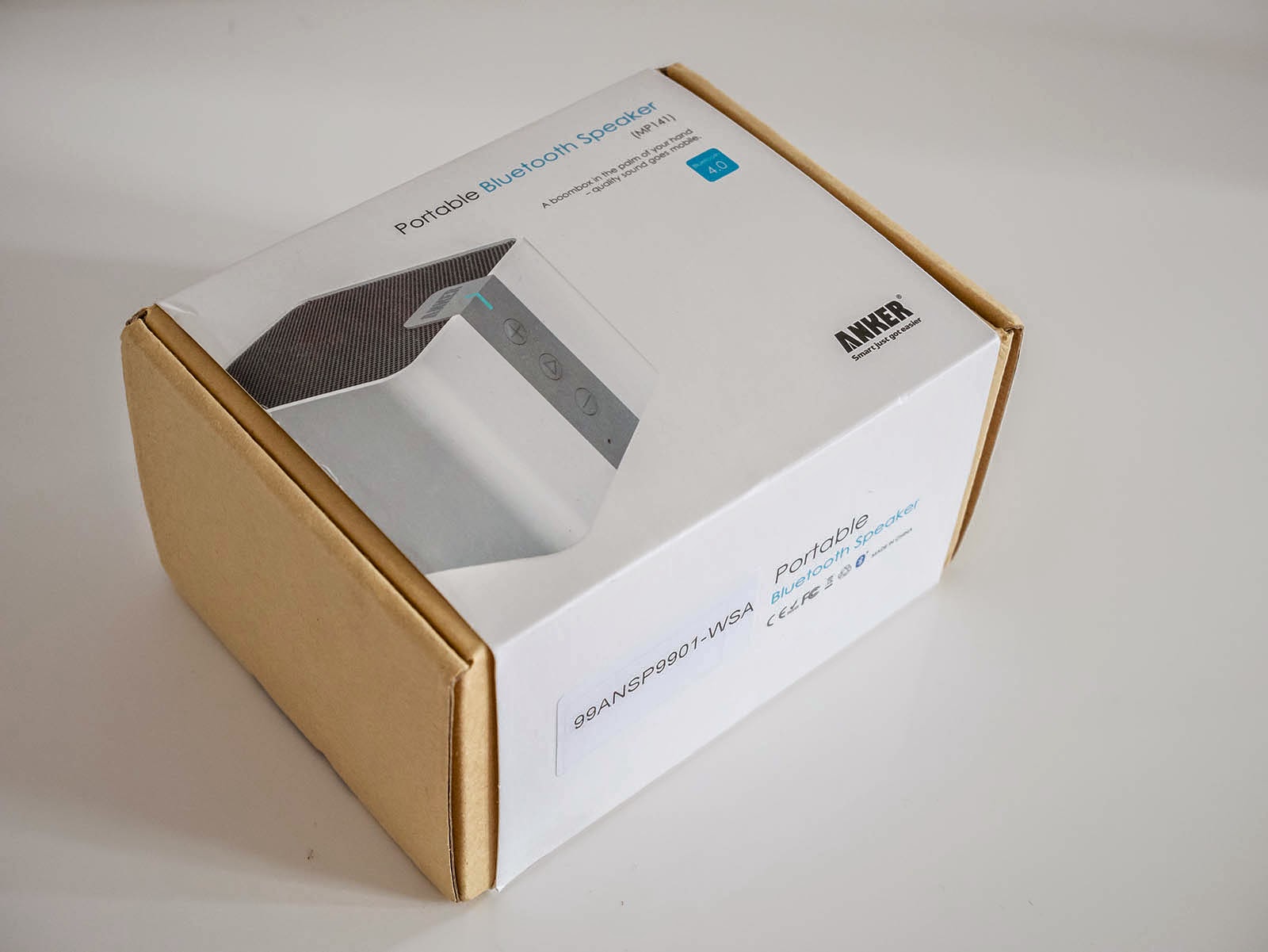 The speaker is available in black and white, mine arrived in white in a very simple nearly eco-type of box. Inside there was the speaker and the USB-cable for charging a manual and a carrying pouch. 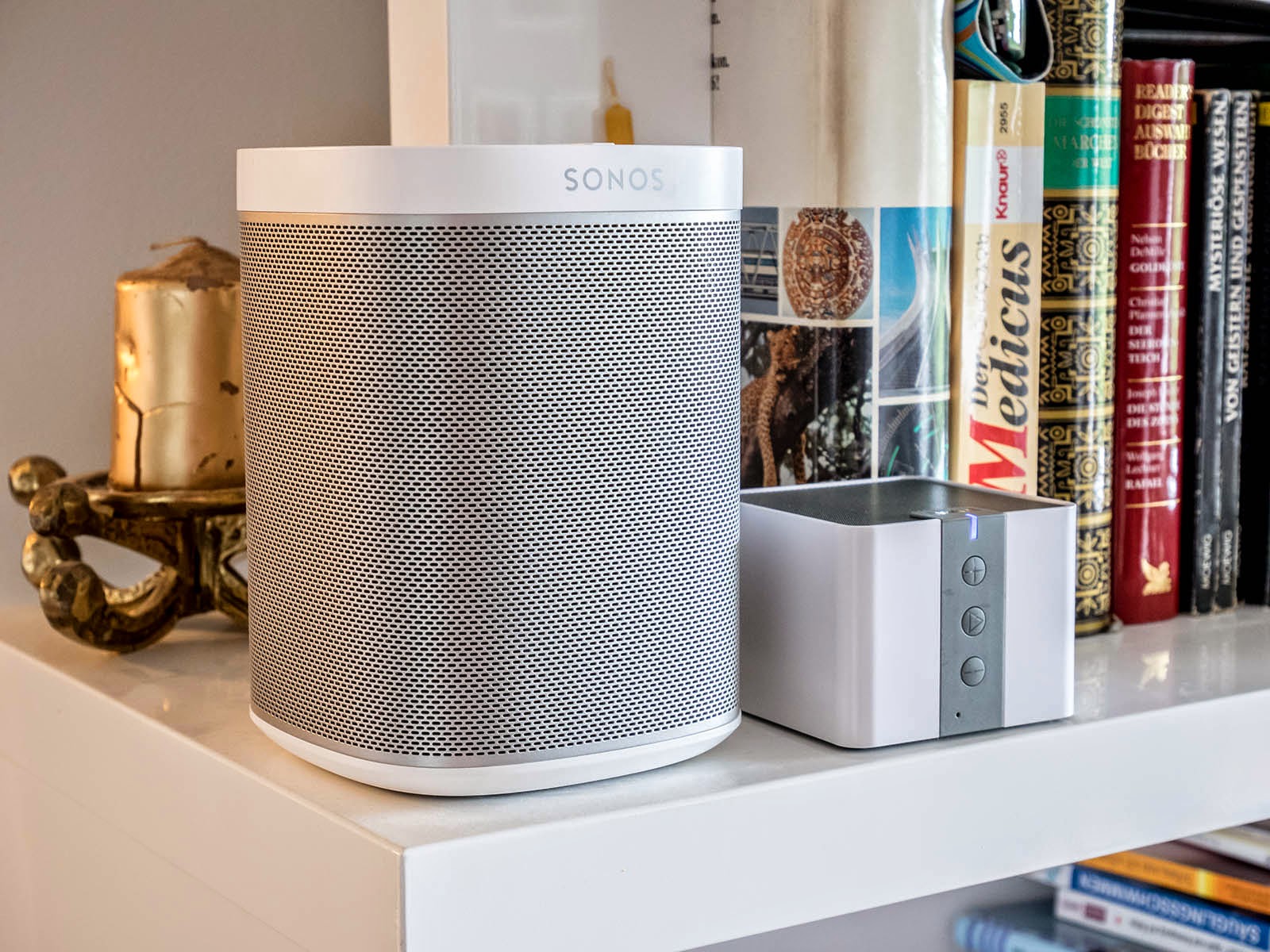 Designwise the Anker speaker is really chic. It reminds me a bit of a mini Sonos, especially in white. Also my wife who normally isn't into speakers, loved its design.
There are only 3 buttons at the front, a play/pause button surrounded by the volume buttons. The power switch is located at the side as well as the micro USB-port for charing. As there is no power supply included, you have to charge the speaker with some existing charger you already own, or just just plug it in into your computer. A little red LED beside the USB-port will show the charging procedure.
What is directly noticeable is the heft the speaker has. I have some comparable little speakers at hand and the Anker is one of the heaviest. Of course it is not as heavy as the Bose Soundlink Mini as the Soundlink Mini is in a completely other category, not only regarding price but also sound. 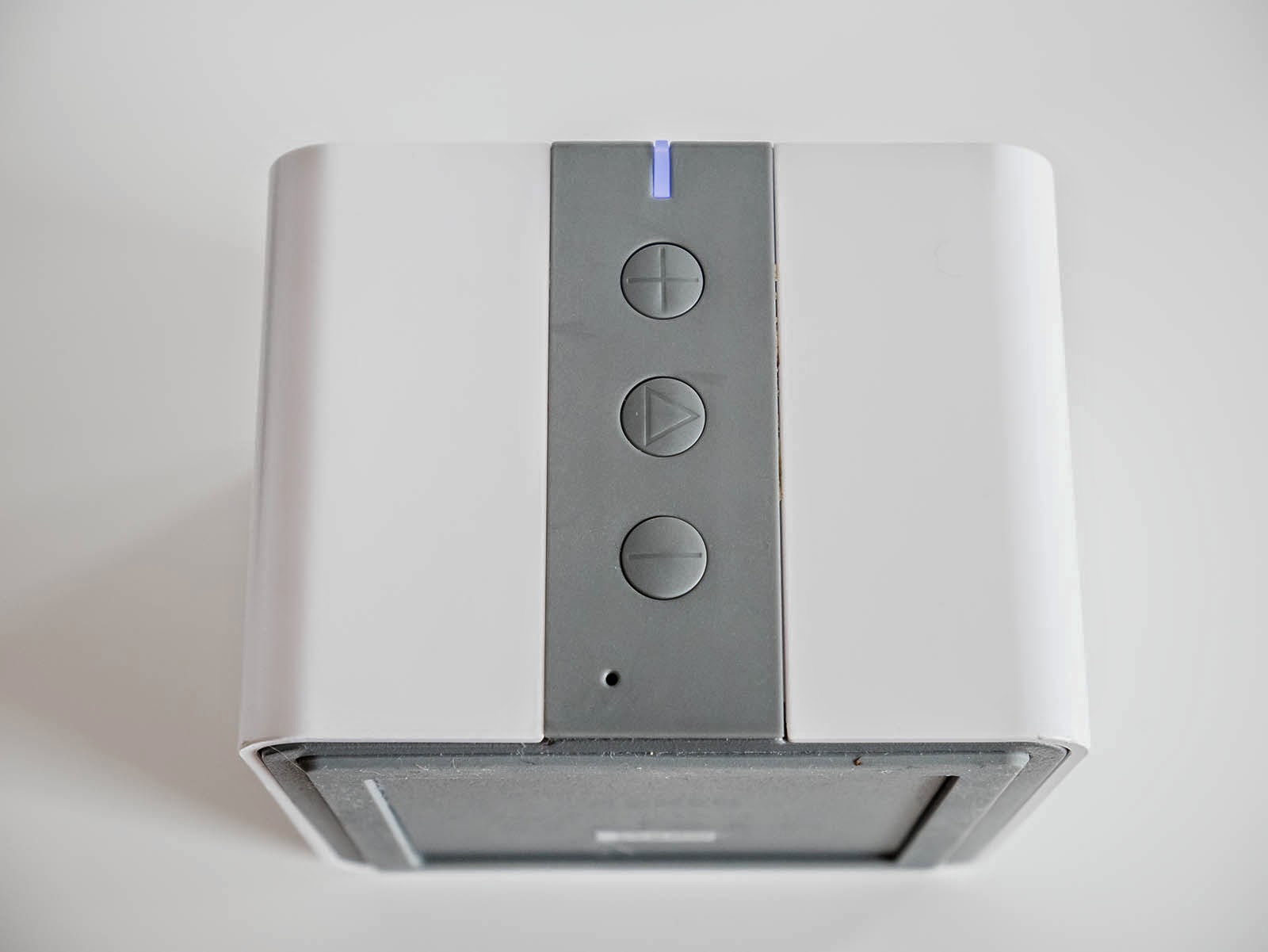 Just turn it on with the little switch at the side and the speaker jumps directly into pairing mode with some "bleep"-triad sound and a blinking LED at the top. The volume of the pairing-sound is much too loud for my taste. Not sure why a more more conservative sound could not be used or if it needs any sound at all.
The speaker will show up as "Anker MP141" in your device list and it will signalize successful pairing with a "klick"-sound.
When in Bluetooth mode you can turn the speaker louder or lower, and you can pause or restart music. There is no way to skip between tracks, and the Anker speaker has its own volume control independent from the player's volume, which makes you deal with two separate volume levels. 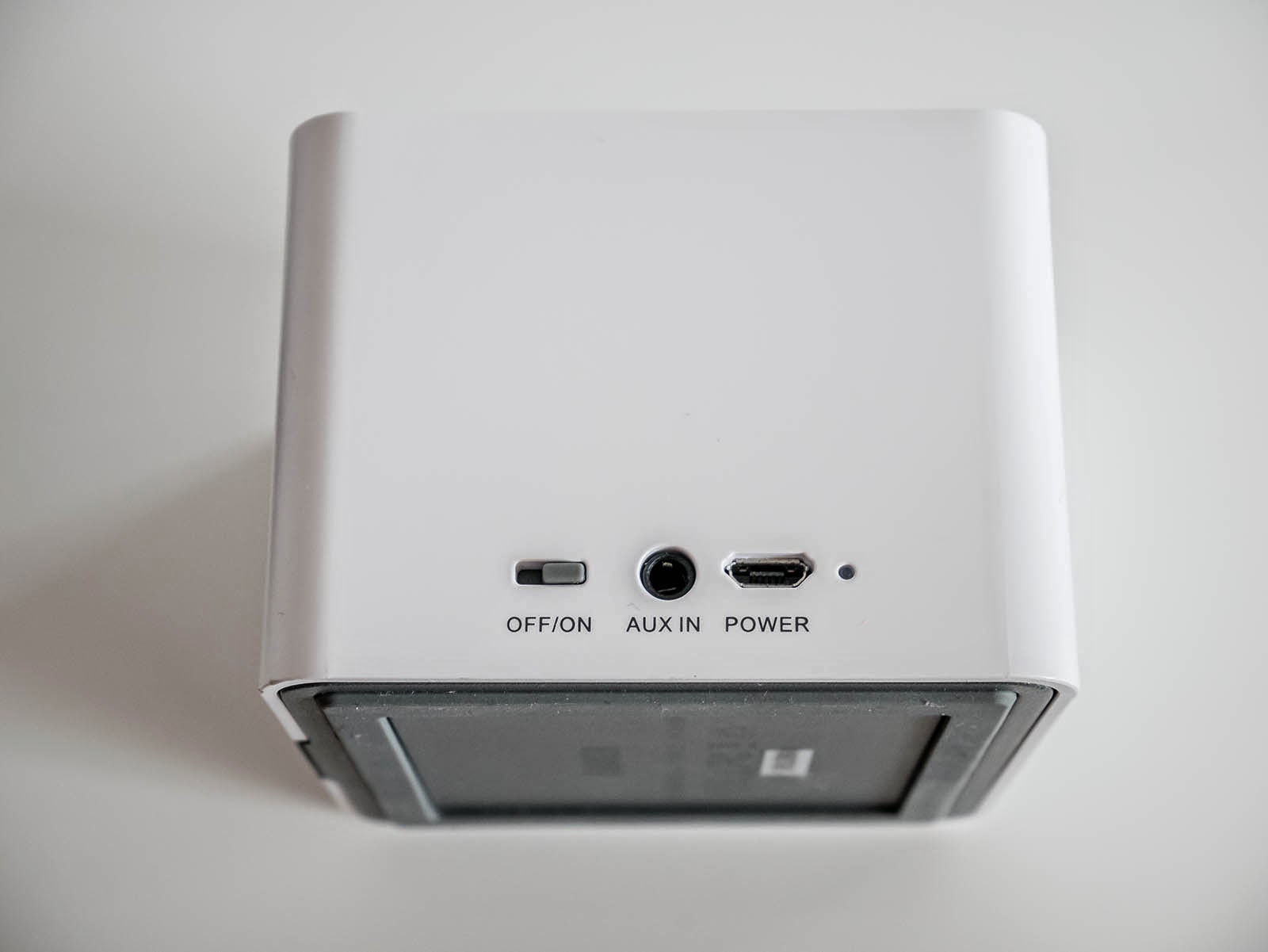 If you don't want to use it through Bluetooth, just plug in a 3.5mm wire into the aux-in port and Bluetooth is turned off automatically. In aux-mode the volume buttons as well as the play/pause button have no function at all. You have to turn louder or lower directly from your player, as the volume cannot be controlled on the speaker anymore.
I haven't found any way to force pairing mode on the speaker, if I wanted to pair it with another device. You have to turn off the speaker and after restarting it will automatically search for already paired devices, if it doesn't found any, you can pair from a new device. This is a bit clumsy, because if you want to pair a new device, but your previous one is still in Bluetooth mode, the Anker speaker will probably automatically repair to the already known one. You must disable Bluetooth on your first device, to be able pairing another. 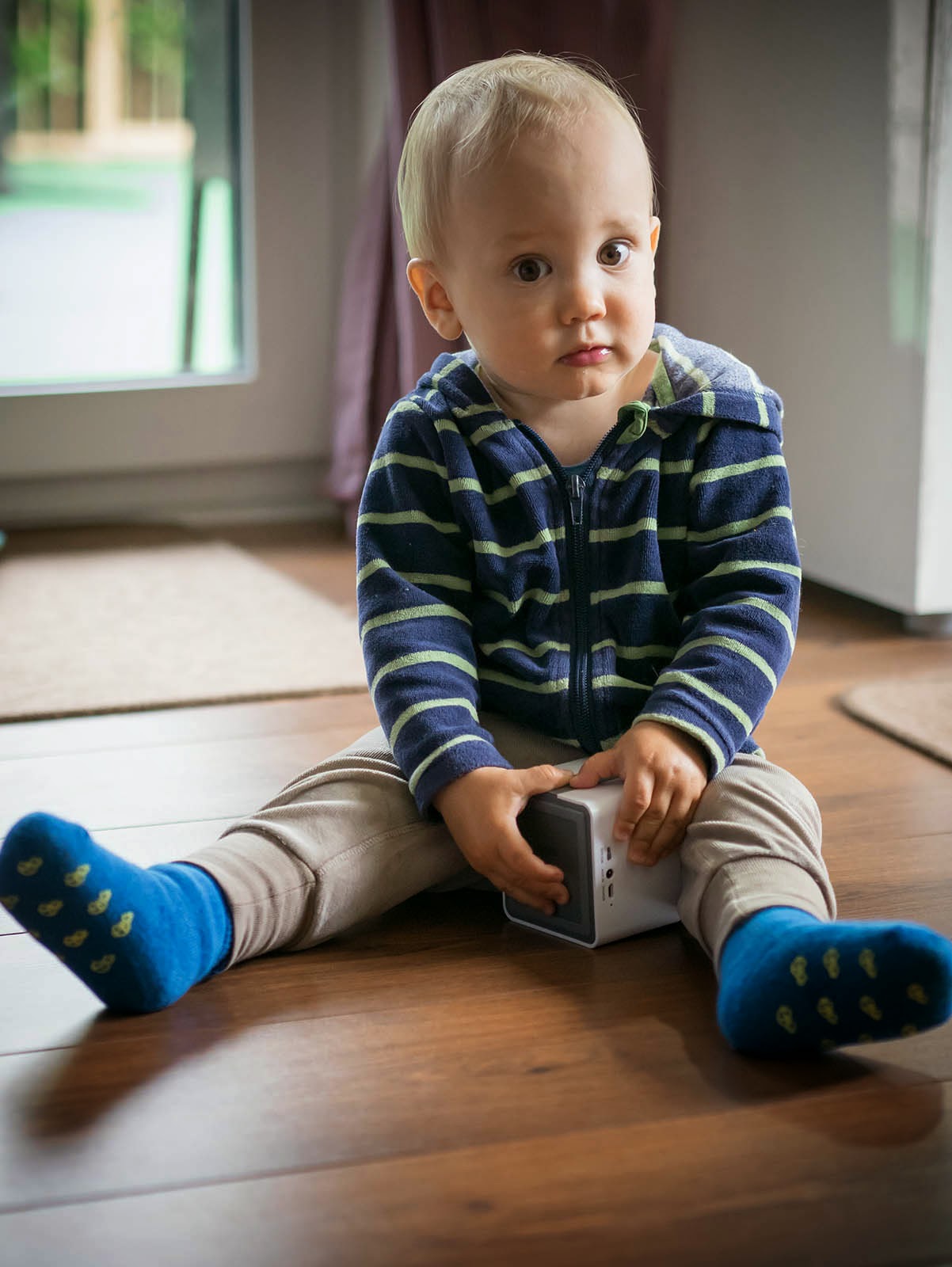 While my little son loved his new "toy", we noticed that bluetooth reach was particularly bad. Holding the speaker between his legs and trying to press the funny little knobs to see what's happening while I was holding the phone right beside me could already result in connection dropouts. The JBL Wireless Micro as well as the Wavemaster MOBI-2 that I had for comparison had both a much longer reach. I could even walk to the next room and still listen to music, which was not possible by any means with the Anker. But at least the built quality seems to be excellent and "baby-proof" as the speaker had to withstand some unwanted floor-contact without any sign of damage. 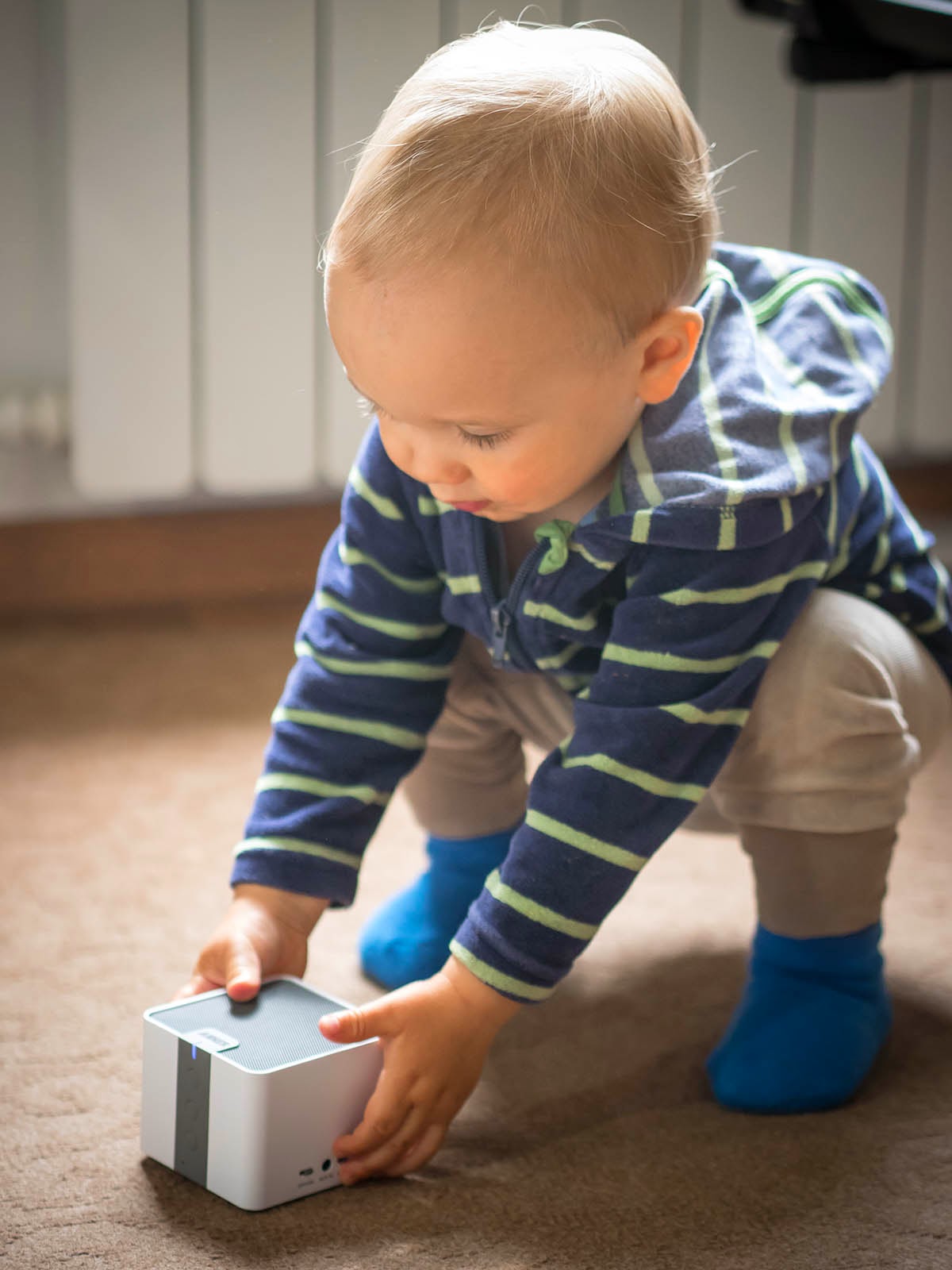 If you look closely you will notice a little opening at the front bottom of the speaker, this is where the microphone is hidden. The Anker indeed has hands-free built in. You can take calls by just pressing the play-button, or you can reject them, by keeping the play-button pressed. If you want to start a call you have to keep the play-button pressed until voicecall gets active or Siri, or whatever is setup on your phone.
Speakerphone quality was so-so. I wanted to use the Anker during a call of with mum, but she immediately asked why I was sounding that far away (with the speaker standing just in front of me at the table).

What interested me most was how good the Anker actually sounded, especially with regard to all the positive reviews so far.
The Anker is not that small anymore. You cannot just slide it into your pocket like you can do with the JBL On Tour Wireless or the Wavemaster MOBI-2 for example. So the Anker should have at least some advantages regarding sound quality, volume or battery life etc. I assume the heavy weight comes from the internal battery, which seems quite powerful, as Anker claims up to 20 hours of battery life. Of course I haven't tested it accurately, but I have used the Anker for several hours a day for an entire week and the battery didn't show any signs of weakness. 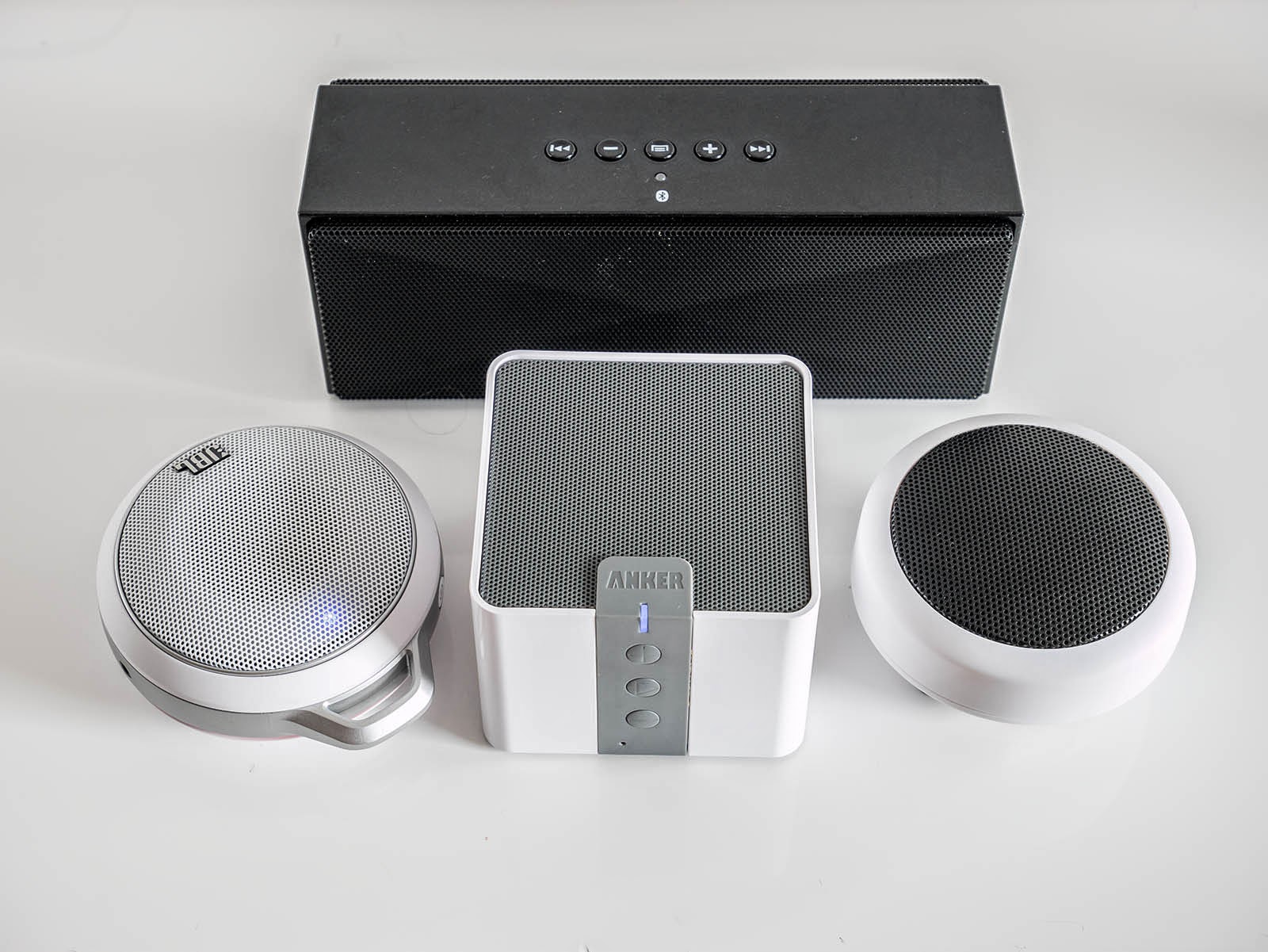 I had some other comparable speakers at hand, that come within a similar price-range, so that I could really judge the Anker MP141 objectively when comparing them all together.
According to current prices on Amazon.de the Anker will cost about 40€, the JBL Micro Wireless is a bit more expensive and costs 46€, but it is considerably smaller and could be even put inside a shirt-pocket. A cheaper alternative and when collapsed still a little bit smaller than the JBL is the Wavemaster MOBI-2 speaker which should cost about 30€. And I also have a slightly larger AmazonBasics speaker (looking like a copy of the popular Jambox) costing about 47€. 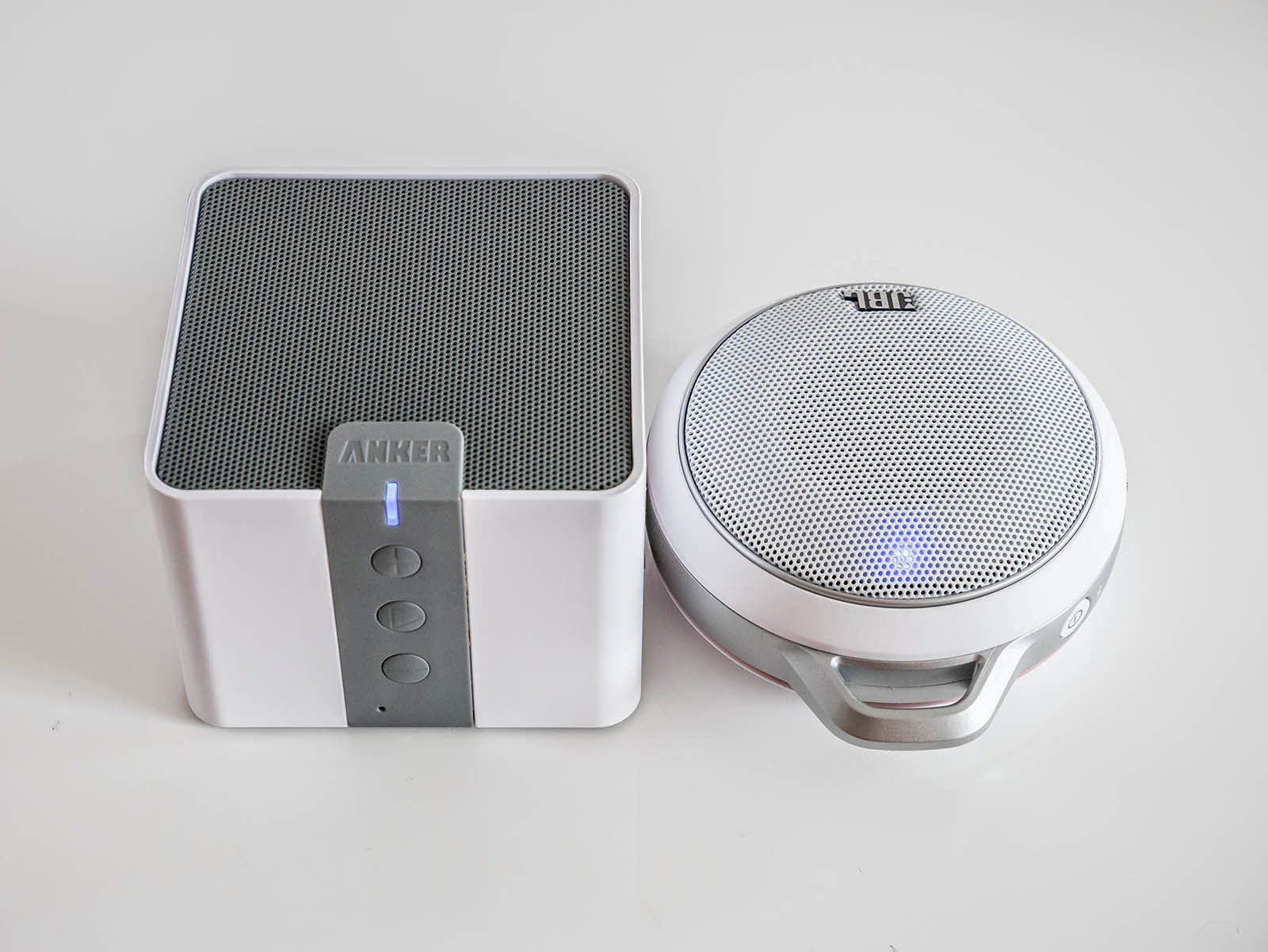 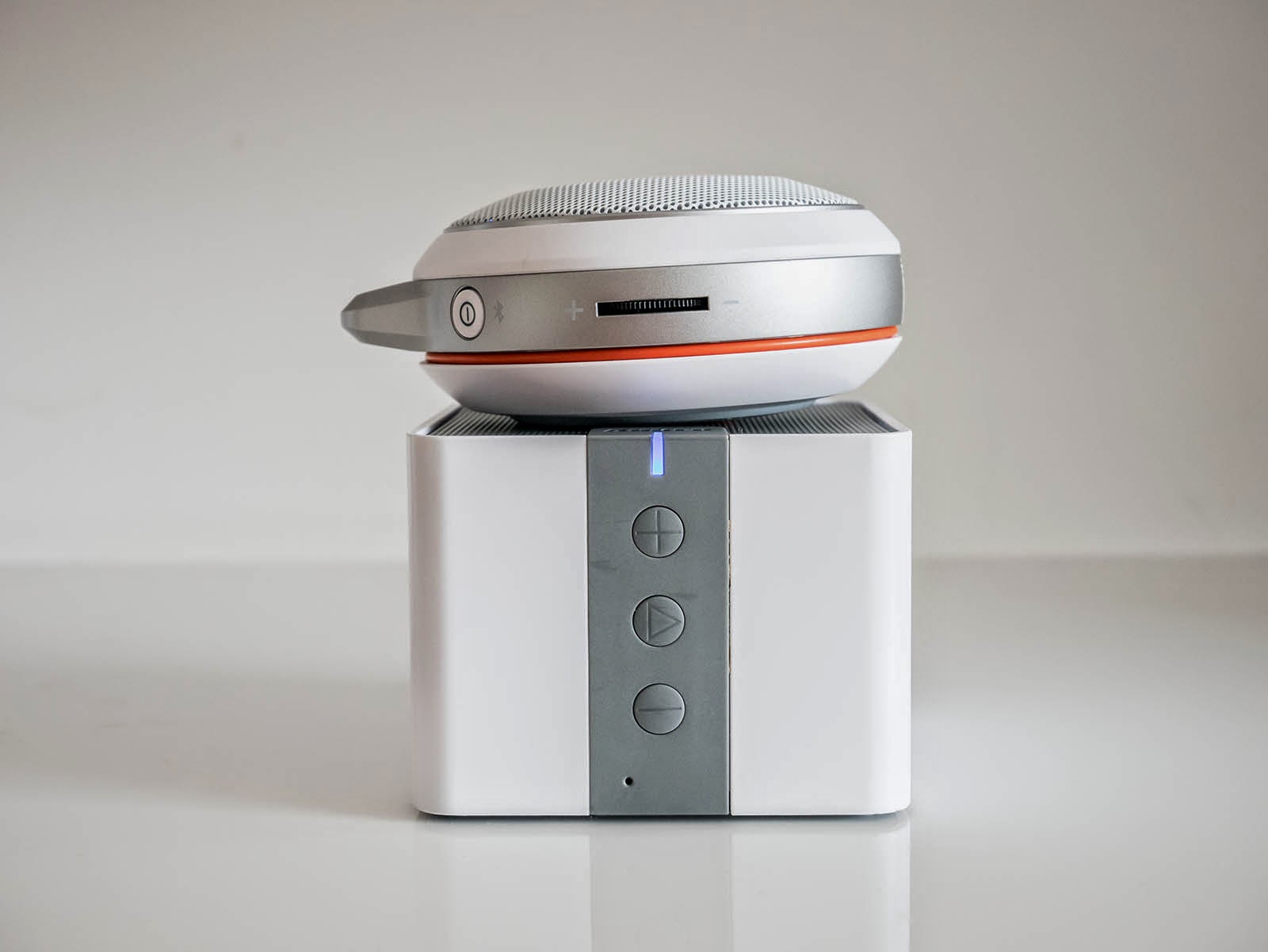 First time I listened to the Anker, I noticed quite a nicely-bodied sound with some welcome low-end, but relatively dull at the same time. The Anker could play surprisingly loud, but there was noticeable distortion on some particular tracks when turned to the maximum, especially on kick-drums. When comparing the Anker to the Wavemaster MOBI-2, the Anker produced a fuller sound, with a more pronounced bass, but with pretty muffled sounding treble. The Wavemaster MOBI-2 had quite harsh mids, but an overall clearer sound. Surprisingly the bass reached lower on the Wavemaster, but it was not very loud, wich made it sound rather thin. Then I switched over to the JBL Micro Wireless and despite being less than half the size of the Anker, the JBL sounded considerably better, with even better low-end and much crisper sound, easily outperforming the Wavemaster speaker and still sounding more convincing than the Anker. While listening to the Amazon "no-name" speaker this one sounded most mature, especially at higher levels, with better low-end than any of these, and clearer treble, which for my taste was a bit too sharp, but overall the Amazon speaker sounded definitely best with the most natural frequency response. It was also by far the loudest reaching about the maximum volume of the Bose Soundlink Mini or even outplaying it on some tracks, albeit with some severe distortion at top-level. You had to turn volume down 1-2 notches to really bring distortion down to acceptable levels, but this was still louder than what the Anker was able to achieve. The Anker doesn't seem to have any limiter or DSP built in, unlike the JBL Wireless Micro, which compresses peaks at top volume and manages to bring bass down a little bit at higher volumes. The Anker might be able to play slightly louder than the JBL, but it does so at the expense of some distortion, while the JBL will reach a slightly lower maximum volume without any annoying distortion problems.
Both the Anker and JBL seem to have a bass reflex port. With the Anker you can hear some pretty deep low-notes when putting the ear against the grille near the corner where the port is located, but you won't hear it from some distance anymore. The JBL seems just better tuned to maximize the physically possible low-frequency output while the Anker port seems to be tuned too low, making the port output barely hearable. The Amazon Basics speaker has a large passive radiator at the back. You won't hear much of it at lower levels, making the speaker sound hardly better than the others, it just comes to life when you crank the speaker a little bit. The Wavemaster seems to be a closed design with an extendible acoustic chamber, which can make the sound a bit fuller compared to collapsed, but it is still tinnest compared to all the others, despite having the lowest possible output.

I prepared a video to demonstrate the sound of all 3 speakers. In contrast to my other videos where the microphone was always facing the speaker-front directly, in this case all speakers have the driver mounted at their top which makes them emit sound more or less omnidirectionally (I didn't include the AmazonBasics speaker for this comparison as it has a more focused and directional sound dispersion). So this time the microphone was positioned at about 45° above the speakers with a distance of 65cm. The speakers were playing at about 3/4 of their maximum volume where distorion or obvious DSP-effects shouldn't be an issue yet.

Putting all together, the Anker MP141 is a nice looking but pretty avarage speaker without any outstanding qualities. You get hands-free and a long lasting battery, but I expected a more impressive sound considering all the raving reviews so far. If it was cheaper I could see it as an alternative to all the other mini speakers in the price range of 20-30€. But as it is now I would definitely choose the JBL as best ultra portable listening solution. It costs only slightly more but has better sound than the Anker and is much smaller and lighter, making it very convenient for transport. The only advantage the Anker might have is hands-free and longer battery life. On the other hand the JBL has the ability to be daisy-chained with other JBL Micro Wireless speakers to maximize output etc. The Wavemaster MOBI-2 might be the loudest of the bunch, but sounded worst to my ears. If size doesn't matter the AmazonBasics speaker would definitely give the best audio-quality at a similar price-range. But at this size there are already dozens other speakers like e.g. the Bose Soundlink Mini which is much more expensive, but able to produce a much more serious sound which is in a completely different class, while being still smaller than the Amazon speaker. Another cheap alternative might be the Grundig GSB120 or the Philips BT2500B which can play really loud.

Email ThisBlogThis!Share to TwitterShare to FacebookShare to Pinterest
Labels: Anker, Bluetooth, mini, portable, REVIEWS, SPEAKERS
Newer Post Older Post Home
No fake or paid reviews as most speakers are bought with my own money!
If you like my blog please support my work with a small donation so I can continue doing independent tests and videos.