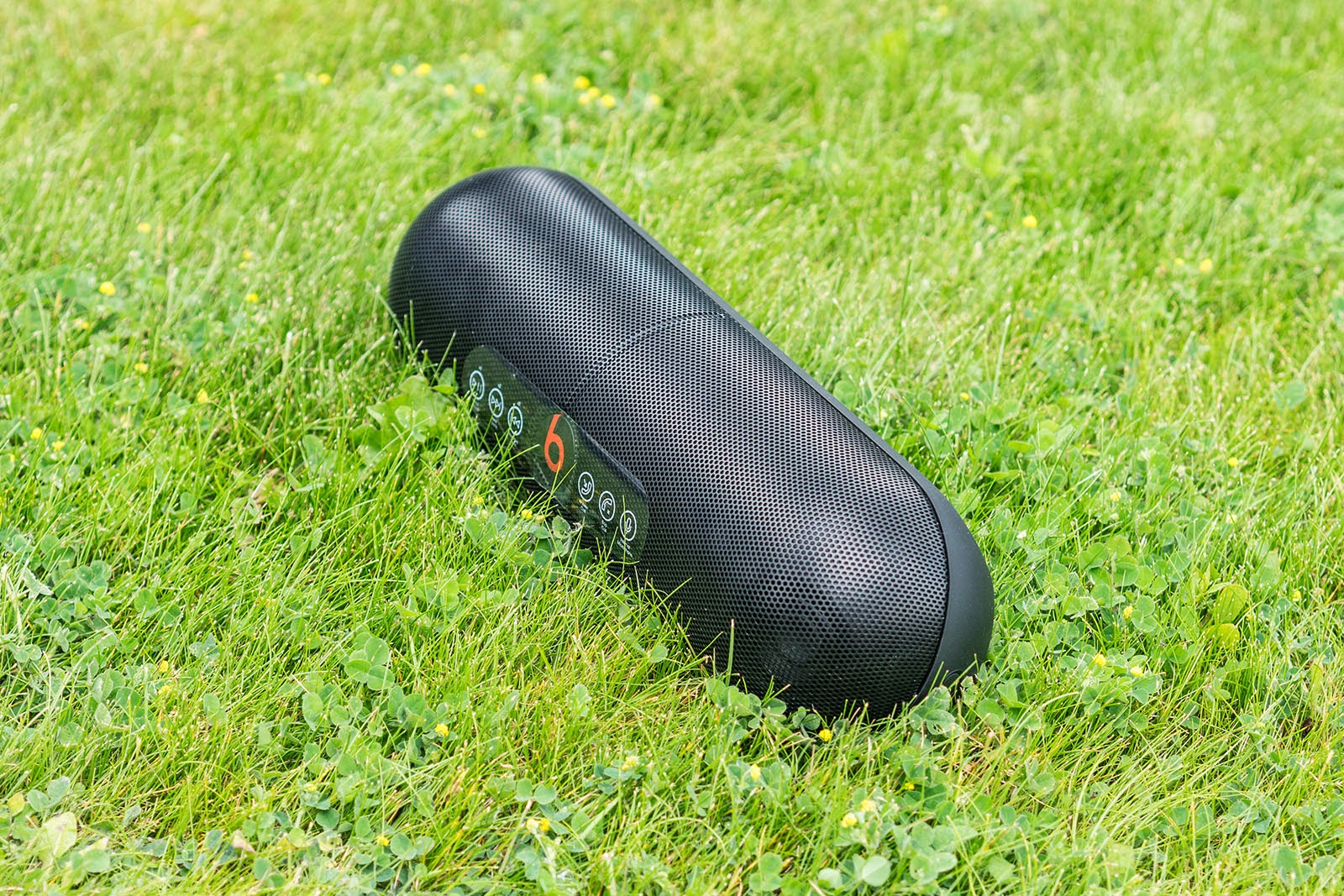 Today during lunch I met my friend, who just received a Beats Pill XL as probable substitute for his IK Multimedia iLoud, after the iLoud started getting battery-problems with self discharge after one day without usage etc. 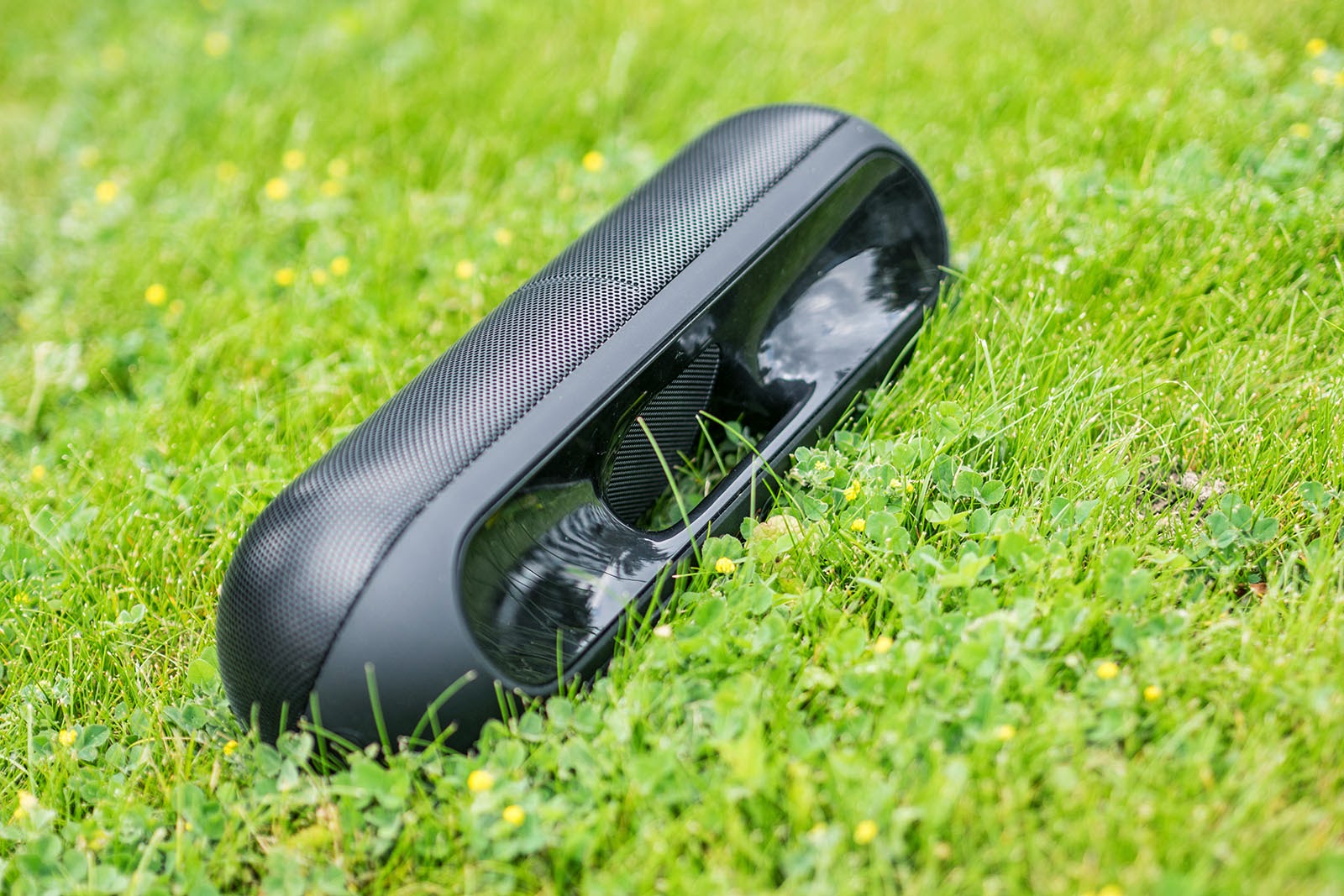 We didn't have much time for any torough test, but he also had his iLoud as reference and I took my Bose Soundlink Wireless Music System to have a direct comparison. As we only listened outside I cannot say how good the Beats Pill XL would sound indoors. 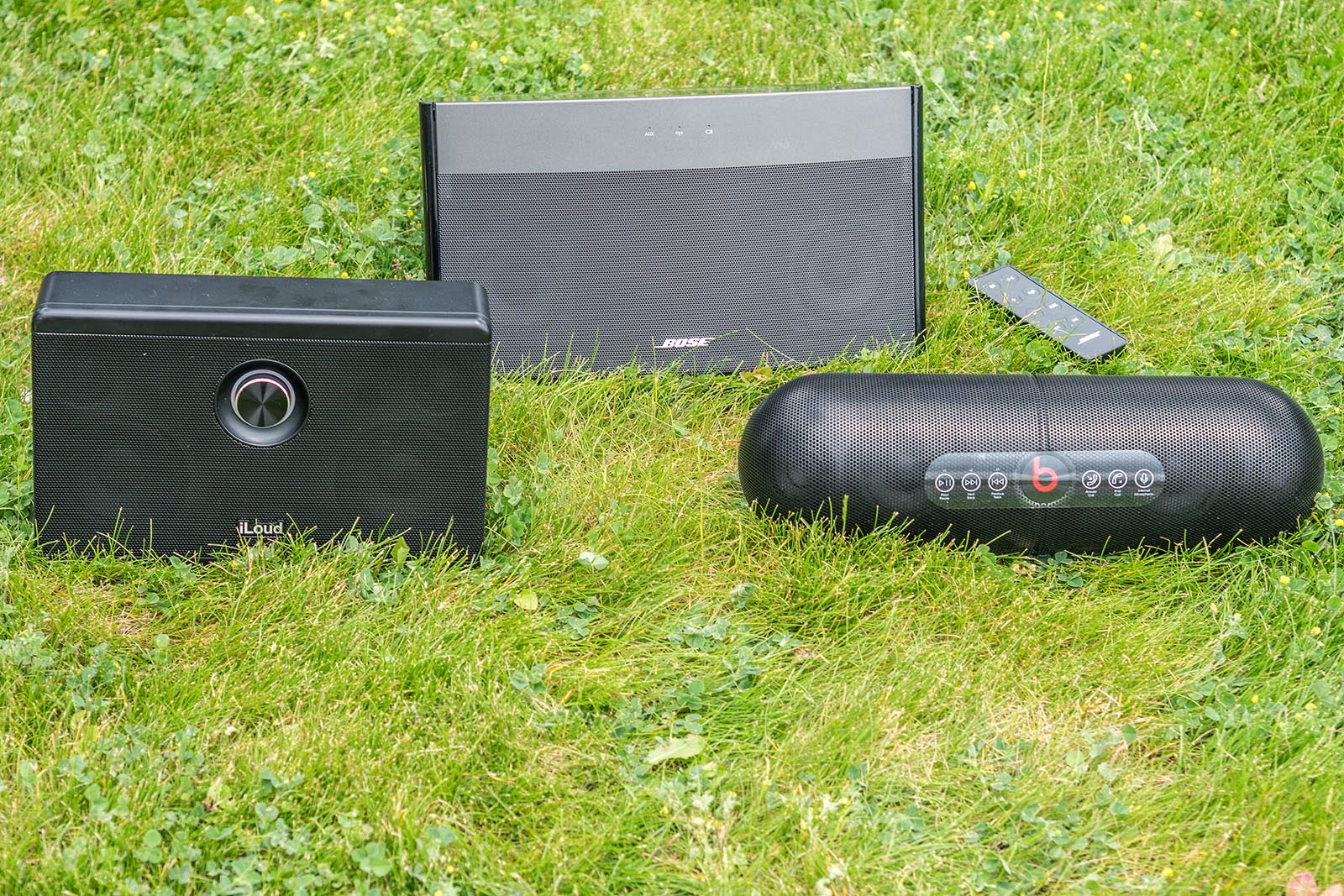 First of all, the Beats Pill XL is a funky speaker. As bad as the original small Beats Pill was, as good and impressive is the Beats Pill XL. The first you notice is the weight the speaker has. It doesn't feel cheap, it really gives the impression of high quality, except the gloss-finish on some parts, which makes the speaker look pretty dirty after some touches.
The volume controls are awkwardly placed at the back, but usually you won't need them often. The big lit Beats logo at the front also acts as control button for pausing or resuming music, skipping tracks, taking calls etc.
The Beats Pill XL even has some kind of retractable ports at the sides, which probably should take a strap for shoulder-wear. I am sure the strap will come as an accessory, as it wasn't included according to my friend. 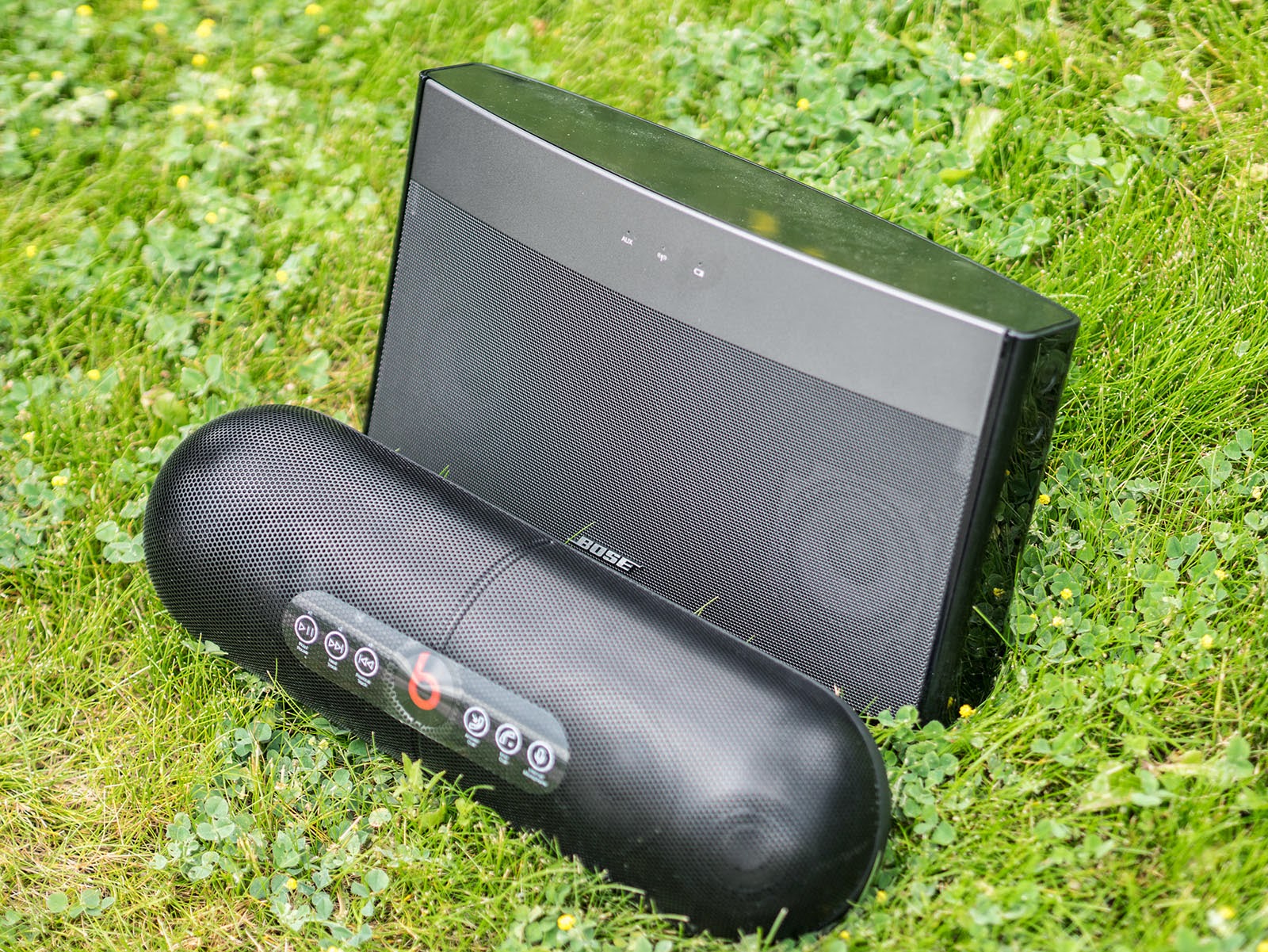 The Beats Pill XL might be slightly bigger in overall volume than a Bose Soundlink III or TDK A33 for example, but it packs much more punch and power. Because of the round form factor it is still pretty packable and should find space in every bag or rucksack. Meanwhile I have heard lots of portable speaker that compact, but so far the Beats Pill XL seems to be the most powerful.

Strangely enough we noticed that output and maximum volume varied depending on the device used. The Android phone of my friend seemed to play with a considerably lower volume than my own iPhone when connected through Bluetooth. Also audio seemed to be loudest when streaming through Bluetooth compared to aux-in, which seems to hint at a rather low-quality pre-amp or ADC.

Apart from that the Beats Pill XL reached nearly the top volume of the already loud iLoud, but it played cleaner at full volume, with only very slight hints of distortion. The iLoud was slightly louder but it had to fight heavily with distortion and clipping.
The Beats Pill XL didn't reach the top volume of the Bose Soundlink Wireless Music System, but it didn't seem to compromise sound much at high levels, unlike the Bose which starts to compress heavily with strong distortion and dialed back bass at the same time. When the Bose was playing at acceptable distortion levels, the Beats could keep up pretty well, producing a similarly powerful and loud sound. 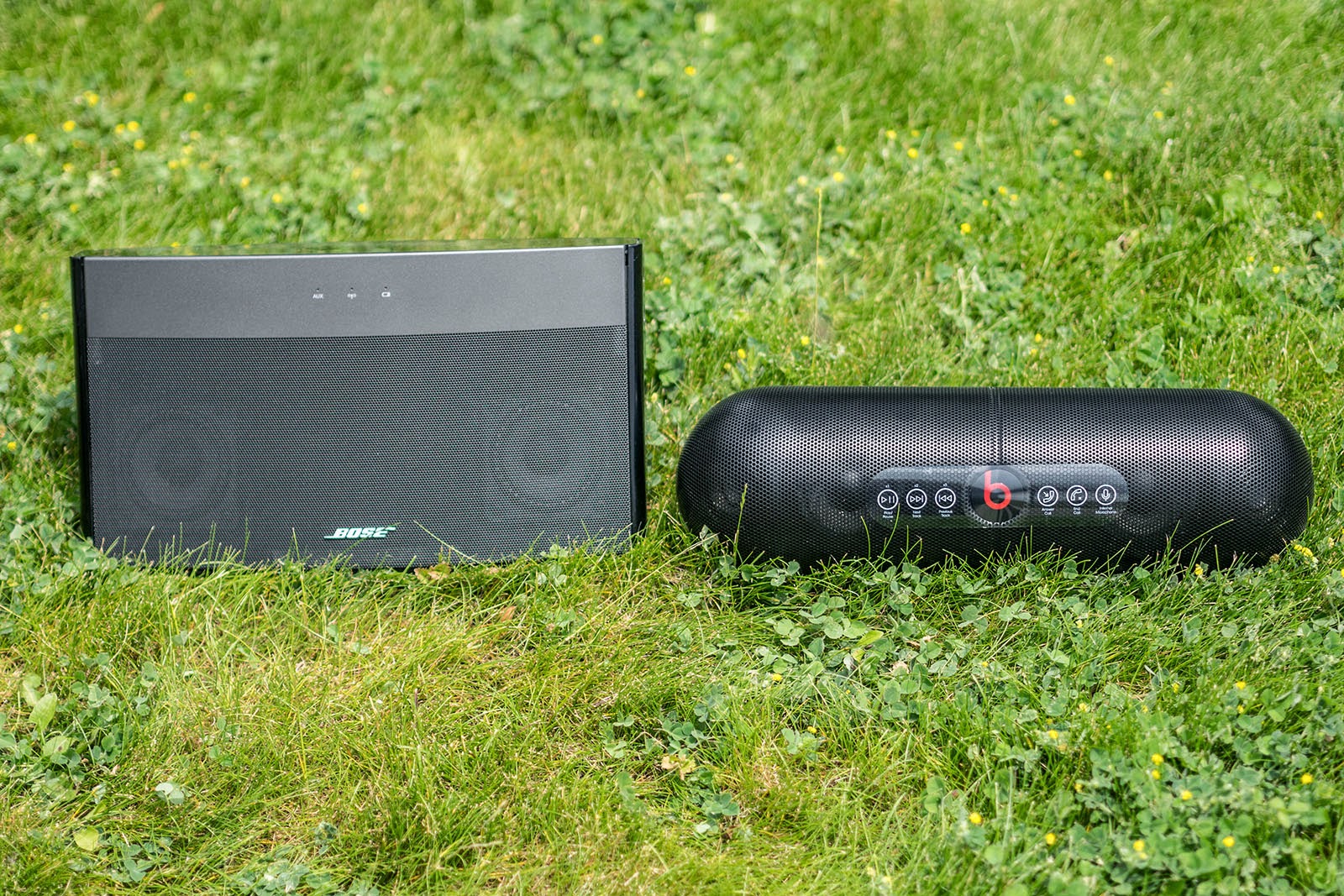 I didn't notice much bass-decrease at high levels as sound remained bass-heavy and dynamic up to top volume, but the sound was especially thick at medium volumes, easily beating the iLoud in overall fullness. The iLoud might sound clearer and more natural, the Beats Pill XL has more of a sculpted sound, but it doesn't sound bad at all. Depending on the genre, this might be an advantage, especially for dance music or R'n'B or Hiphop. The Beats Pill has more upper bass than the Bose for example, and it has clearer treble. Also noticable are somewhat subdued mids when directly compared to both the iLoud or the Bose. The Bose had the deepest bass playing down to about 50Hz and even slightly lower. The Pill XL seemed to have the passive radiator tuned at about 60Hz, below there was hardly any output. As there are is no bass-reflex port bass seemed even cleaner and more powerful than on the Bose or iLoud, because any possible port noise was completely missing. I also noticed quite good treble dispersion, the Beats Pill XL seemed to be less directional than the others.

With all the available features (Apt-X, NFC, stereo pairing of 2 speakers, charging of external devices) the Beats Pill XL might be one of the best choices if one looks for a powerful but still pretty portable speaker. The Beats Pill XL doesn't reach the power of a Klipsch KMC-3 for example or even bigger boomboxes, but it easily beats all comparably sized rivals I have heard so far.
If you don't need that sheer power, the much smaller Bose Soundlink Mini might still be an interesting choice. Up to its limits it should be able to keep up in sound quality with the Pill XL, maybe even beating it at lowest levels, where the Beats Pill XL seemed to sound a bit thin, at least from the short impression I had outdoors.

I really liked the Beats Pill XL and if I was in the market for that kind of speaker, it would be definitely on top of my list, outperforming most similarly priced alternatives like the Bose Soundlink III, Loewe speaker2go, Big Jambox etc...
Posted by oluv at 5:48 PM

Email ThisBlogThis!Share to TwitterShare to FacebookShare to Pinterest
Labels: Beats, Bluetooth, FIRST IMPRESSIONS, portable, SPEAKERS
Newer Post Older Post Home
No fake or paid reviews as most speakers are bought with my own money!
If you like my blog please support my work with a small donation so I can continue doing independent tests and videos.