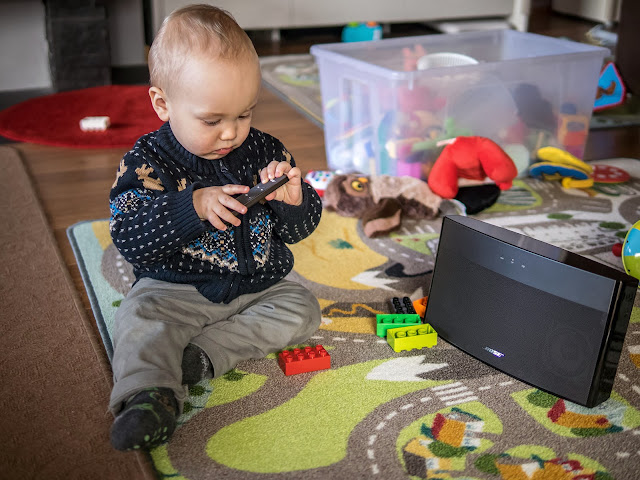 Bose has the habit of very long life-cycles for their products. I have no idea how long their Waveradio has already been on the market without much changes in design or acoustics (not to mention their nearly 50 year old 910 speakers).
The same is true for their Bose Sounddock, which now is revived within the 3rd vesion, but didn't change much from the very first version that came out 10 years ago.

When someone asked me about a speaker more powerful than the TDK A33 or the Bose Soundlink II, but without the bulk of a boombox like the Altec Lansing Mix or Klipsch KMC-3 there is hardly anything on the market. I had sold my Bose Sounddock Portable half a year ago, as I haven't used it anymore that often, because of the dedicated Apple-Dock and because due to heavy usage the dock got bad contact and wouldn't charge my Iphone anymore, but also because the Soundlink Mini was enough for my needs most of the time, as I didn't need the power or volume of the larger Bose speakers. Funnily the Mini even managed to sound more convincing than the bigger ones up to normal room listening levels.
Either the speakers are really small like the Soundlink Mini, JBL Charge, UE Boom etc, or book-sized like the Soundlink II, the Loewe speaker2go, TDK A33. But then there is a big gap until the really big ghettoblasters jump in with nothing inbetween.
I only found the new IK Multimedia iLoud (review will be coming soon), which is indeed a nice speaker not that much larger than the Bose Soundlink II but with considerably more power (they claim 40 Watts) and volume.

But here I  would like to present an interesting alternative, that I found at Ebay. There were many used Soundlinks Wireless Music Systems for about 150-200€. Quite a bargain and much cheaper than a new iLoud for example! From my own experience Bose speakers hardly ever brake and even a used Soundlink Wireless System should do its job for the next 5-10 years if handled with care.
I got one for 199€, 3 months old with an original invoice from a store, which probably was sold during a stock clearance. 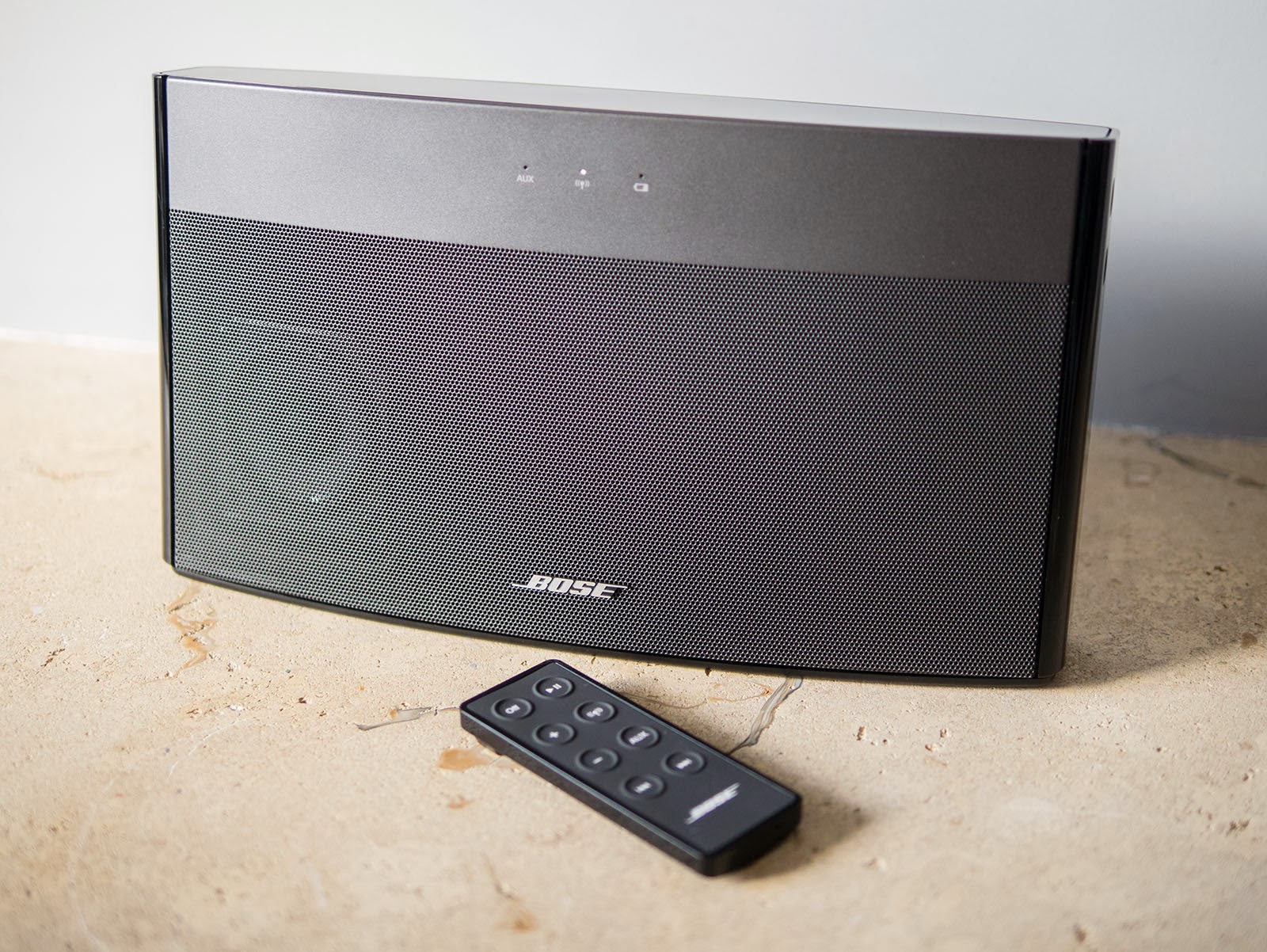 Of course I could also have bought the new Soundlink Air, but in my opinion Airplay is not so well suited for portable use. Although the Soundlink Air can be brought into some kind of direct-play mode where it would stream music directly from an Iphone without the need of an additional network, this isn't very stable and doesn't work every time. Also streaming through Airplay (or Wifi) uses much more battery than streaming through Bluetooth. Of course you can stream losslessly through Airplay, but normally in case of the Bose Soundlink Air or Soundlink Wireless System, you shouldn't be able to hear any difference between Airplay and Bluetooth, it is not the most detailed speaker. 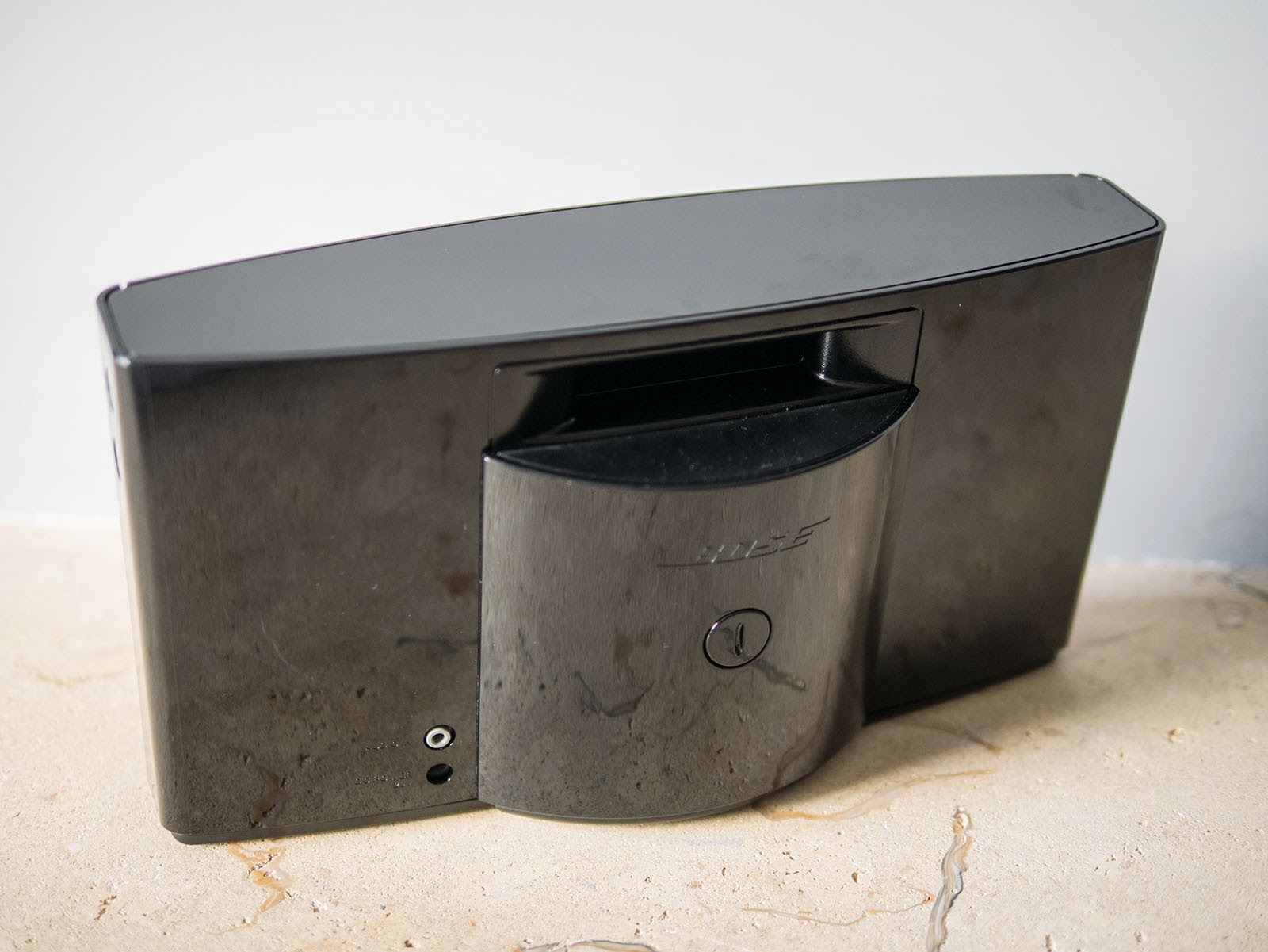 The Soundlink Wireless Music System has the advantage of exchangeable batteries over many comparable speaker systems. A spare battery usually goes for about 70-80$, and can be exchanged within some seconds by just turning a big screw with a coin or fingernail. At highest levels the Soundlink Wireless Music System should play about 3 hours according to Bose. I had it playing at lower levels like 70%, which is already pretty loud, but the sound doesn't suffer yet because of overly strong DSP processing, and it played for more than 4 hours. At comfortable room listening levels you should be getting more than 8 hours out of one single charge. I even squeezed out more than 12 hours out of my old Sounddock Portable, I haven't tested if I manage the same with the Soundlink Wireless Music System. I am not sure if Bluetooth drains more battery than charging an Ipod, as the Sounddock Portable was charging docked devices also when running from battery.
A full charge will take about 5-6 hours. The power supply is rather huge, but it has a handy loop to wind up the wire if not in use. There is also an additional car-adapter available, so you could charge the speaker even in your boat or caravan when on the go. 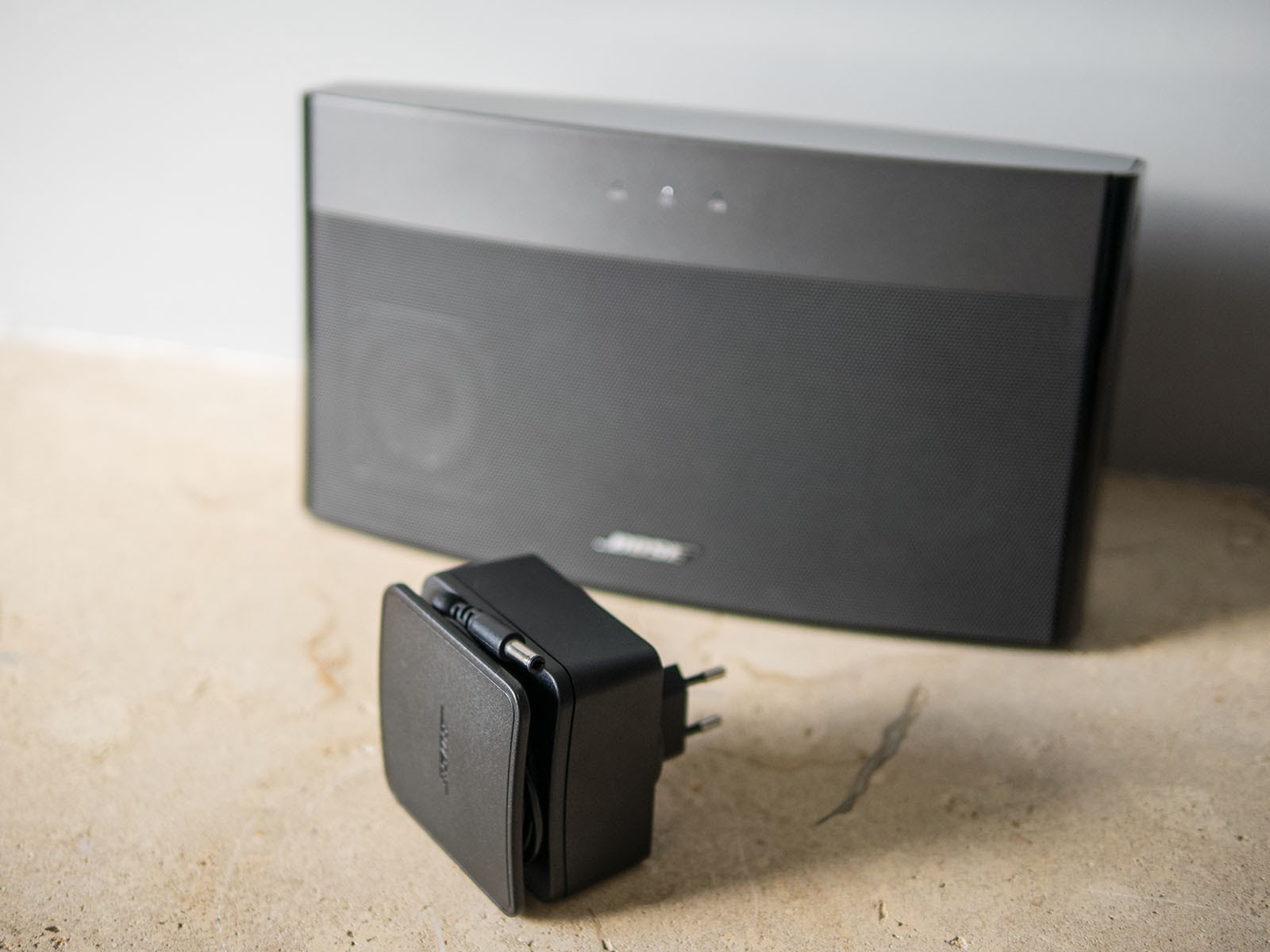 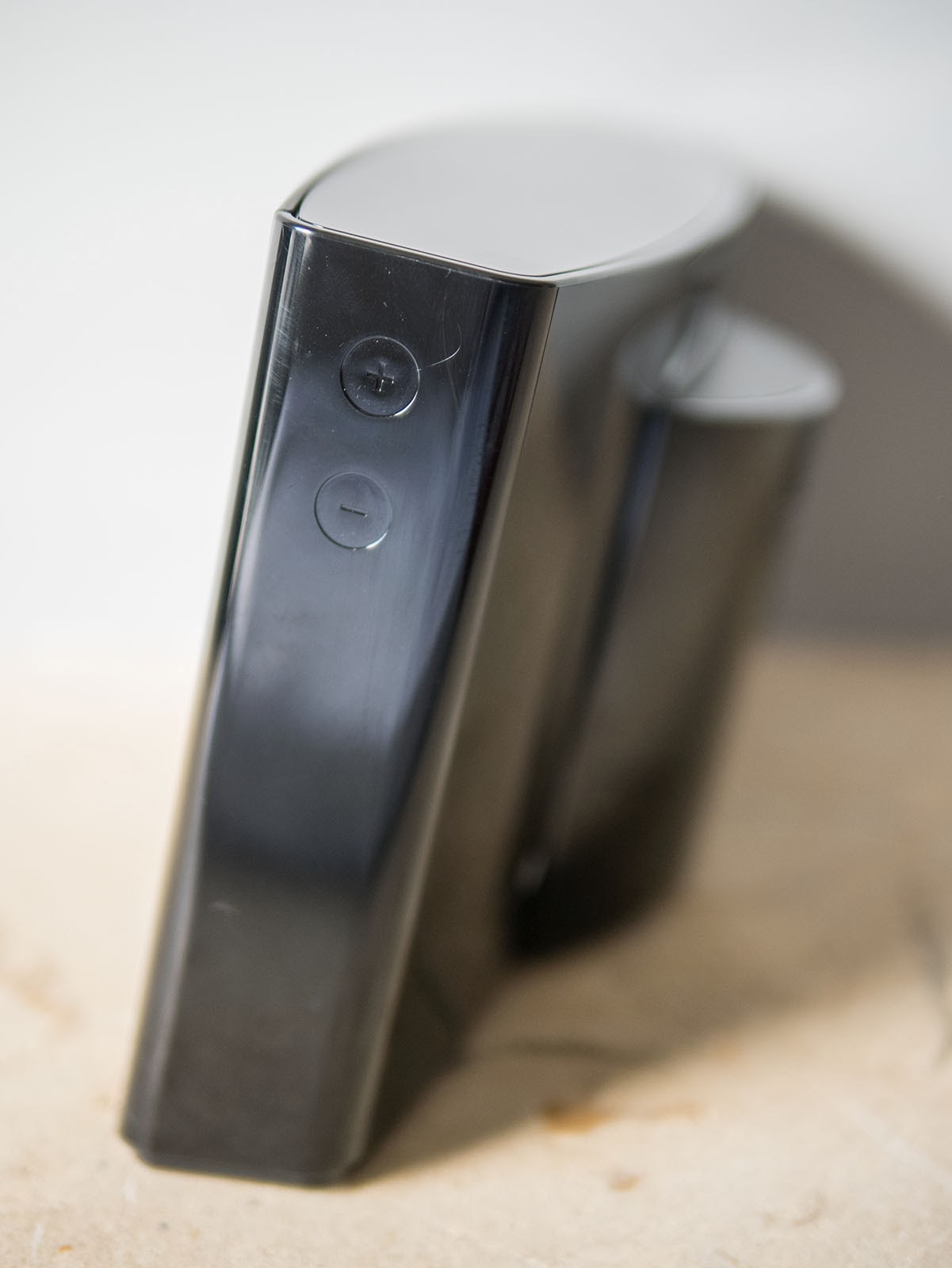 The Soundlink Wireless Music System has no controls, there are only 2 touch-buttons for changing volume at the right side. Everything else must be done through the remote. While you could use the Sounddock Portable even without remote, because it automatically turned on as soon as you touched one volume-button, this is not possible with the Soundlink Wireless Music System anymore. You have to turn it on with the remote. If you lose the remote, you won't be able use it. You could force a turn-on if you remove the battery and attach it agian, or if you attach the power cord, then the speaker automatically powers on as well. It is also powering off automatically after 20 or 30 minutes when there is no Bluetooth connection active. So far I haven't noticed an automatic power down with an active Bluetooth connection. The Soundlink Mini even turns off when connected, provided that nothing is currently playing.

When holding the wireless button on the remote for several seconds, the Soundlink Wireless Music System jumps into Bluetooth pairing mode and you can connect to it from any Bluetooth enabled device. It acts like a usual Bluetooth speaker, there is no need for the additional Bluetooth dongle (to tell the truth I haven't even tried the dongle out yet).
As the connection is based on A2DP, you can also use the remote for skipping tracks, or starting playback and pausing it again. This worked with my Iphone or Ipad, I haven't tested it with other Bluetooth enabled phones.

How is the sound? Bose like! It is not perfect though. I cannot remember if my old Sounddock Portable sounded that much different, maybe Bose tuned the Soundlink Wireless Music System a little bit, but treble sounds somewhat harsh to me, especially on-axis, while mids are more restrained making the overall sound rather dull. Especially vocals suffer a lot compared to other speakers. It is not a very natural or linear sound, but it is still very enjoyable. Bass is really powerful and well under control, until the speaker reaches 3/4 of its volume, then bass and dynamics are reduced considerably. At top volume there is also some stronger distortion, but we are talking about really loud levels already, especially for a speaker as compact as the Bose Soundlink Wireless Music System.

The Soundlink Wireless Music System sounds best at medium levels, at lower levels the sound can become too boomy as treble is muted too much then. I even prefer the sound of the much smaller Soundlink Mini at lower levels, as it sounds clearer, despite not having that much sparkle in the upper treble.
Compared to the Sonos Play:1 which seems even a bit smaller, the Bose has more power and plays louder. But the Sonos has a more natural sound with a similarly powerful bass, but less boomy. The Play:1 bass seems to even have more impact at the lowest frequencies, but it is not as pronounced in the upper region as that from the Soundlilnk Wireless Music System. The Play:1 also has a less directional sound dispersion, while the Soundlink Wireless Music System suffers quite a lot if  not listened frontally.


I would claim the Soundlink Wireless Music System to be indeed better suited for outdoor listening. Outside it sounds nicely balanced due to the stronger bass, that usually gets lost pretty quickly in the open field. When cranked you can still hear it with acceptable volume from 20 meters away, and from some distance you won't even notice that much distortion even if playing at top volume. The Soundlink Wireless Music System won't be able to throw a huge beach-party, but it should have enough power for any garden grill-fiesta.
If you need something more powerful than the Soundlink II or TDK A33, but still need to keep it quite portable, grab a Bose Soundlink Wireless System if you can find one. It plays twice as loud and has an overall much more powerful and mature sound.
It is definitely worth 200$ even in used condition and I doubt it will break that soon. If the battery is already weak, you can buy a new one. There is still no real alternative at this size right now that I know, maybe the new iLoud from IK Multimedia, so stay tuned for a review and comparison of both.
Posted by oluv at 6:26 PM

Email ThisBlogThis!Share to TwitterShare to FacebookShare to Pinterest
Labels: Bluetooth, Bose, portable, REVIEWS, SPEAKERS
Newer Post Older Post Home
No fake or paid reviews as most speakers are bought with my own money!
If you like my blog please support my work with a small donation so I can continue doing independent tests and videos.