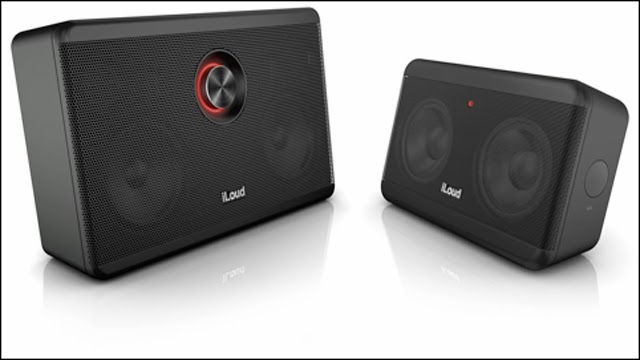 IK Multimedia had already announced both iLoud speakers more than half a year ago. Finally the speakers seem to have become available.
There is a big version with 40 Watts of power as well as a smaller more portable mini version.
The big one already seems to be in stock at the US amazon store, the german amazon store lists both, but only with an availabilty of 1-2 months.

IK Multimedia talks big to have produced the best sounding portable speaker so far. They claim to have bought all portable speakers available with the goal to produce one better and louder sounding. They market the speaker as music monitors for serious listening that should also please real audiophiles. There is a Mic/Guitar Input at the back, so that you can gig around on the go and use the iLoud as a monitor.

IK Multimedia also posted some interesting comparison videos on youtube, where you can see how the bigger iLoud fares against the UE Wireless Boombox, the BIG Jambox and the Bose Soundlink. I have no idea how real the videos are, but they seem rather authentic, as I recognize the sound signatures of the other speakers quite well (especially the muffled Bose Soundlink). Have a look:


There is already a review of the bigger version available on iLounge, and they liked it quite a lot.
Posted by oluv at 4:30 PM

Email ThisBlogThis!Share to TwitterShare to FacebookShare to Pinterest
Labels: Bluetooth, IK Multimedia, NEWS, portable, SPEAKERS
Newer Post Older Post Home
No fake or paid reviews as most speakers are bought with my own money!
If you like my blog please support my work with a small donation so I can continue doing independent tests and videos.